Kind of a light news day, and thank God for that, after he Astros enjoyed an actual off-day after playing 17 games in 17 days. There are four off-days remaining in the regular season.

The Astros need to go 15-15 to hit the 100-win mark for the 3rd straight season, and would be the first team to do so since New York did it from 2002-2004. Bregman's ready for it:
It's going to be a good race to the finish, and then real baseball starts. Looking forward to it.

*Playoff Odds (Note: I'm doing this about 4:40am Central. Some sites (B-Pro, B-Ref) haven't updated from last night's games, but you'll get the basic idea. Click the links later to see how it changed, if you want.)

Nothing much has changed regarding these numbers from the last time we did this, just over two weeks ago. FanGraphs and FiveThirtyEight still think the Astros have the best chance of winning the World Series. Baseball Prospectus and Baseball-Reference still give the edge to the Dodgers.

*Jake Kaplan says these 11 players are fighting for a playoff roster spot down the stretch. And Ken Rosenthal has some thoughts on the Verlander v. Fenech title bout. (Both $)

*ESPN's Bradford Doolittle, on how the Astros just keep getting better and better.

*McTaggart has an inbox in which he discusses Yordan's Rookie of the Year chances, Forrest Whitley's chances of pitching in the postseason, Kyle Tucker unseating Josh Reddick, the chances of bringing back Smith, McHugh, Harris, Rondon, and Miley.

*You need this new Yordan shirt from BreakingT: 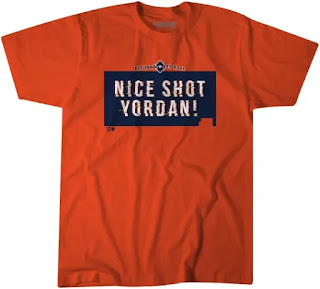 *A.J. Hinch, on Cy Sneed and his four call-ups/send-downs in August:
He has such a great attitude. We are going to bring him back in September at some point, and he's going to get an opportunity to pitch a little bit more than he has. He's been a trooper and gotten some frequent-flyer miles and been our insurance policy, and I applaud his attitude.

*Bad news for me: Apparently getting six hours of sleep is just as bad as not sleeping at all.

*How to become a great impostor.

*Esquire: Inside the twisted, worldwide hunt for a $7m stolen car.