Sorry about yesterday's Hot Links. I was simply Not Having It. The Astros got back up on the horse which literally means "Justin Verlander" and beat the A's 4-2. Houston is 66-38 with a 7.5-game lead on Oakland. They have won nine of their last twelve games.

*Let's start off with the Most Important News of the Day: A Live Lima Time Time! 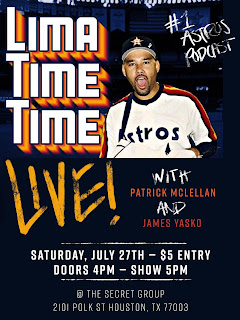 Come out to The Secret Group (2101 Polk Street) for a live recording of the newest Lima Time Time episode on Saturday. Doors at 4pm, Show at 5pm. Bravado Spice will be doing some giveaways, and we have officially invited Jeff Luhnow, JJ Watt, Chamillionaire, and Guy Fieri. It's $5. You have nothing else to do at the end of July. If you can't make it to that, but are going to be at the Cage The Elephant/Beck/Spoon show at The Woodlands, holler. (Thank you so much, Claire and Pat).

*Hinch:
It was a good homestand, especially against the A's to come back after the tough loss and the tough start to the day early to give them a lead. When you take care of your own division, things start looking a little better.

35-12. When you're winning 74.4% of your division games, things are going okay. Some Wins could probably be described as Bullcrap, but some losses were definitely Bullcrap. It works out in the end. You don't accidentally win three-quarters of your games

*Hinch, to the Wonderful Susan Slusser, on the A's:
We match up pretty well against them, our best right-handed pitchers are good against their right-handed hitters, but they're good. They have a persistent lineup that's dangerous, they're tough to strike out even though we have high-strikeout pitchers. Their bullpen is always something to pay attention to...They're a well-balanced team. I love the fact the A's always squeeze performance out of their players, so you have to play good baseball to beat them, and this series has proven that. When we've given them a little bit of a window to come back, they've come back and beaten us, and we handled them in the first game with some explosiveness we have. Two good teams that hopefully fight it out to the end and both make the playoffs again.

Verlander has allowed two home runs in his last 18IP, and has made two starts in the last three without allowing a single long ball. For the first time this season Verlander has made back-to-back starts with 10+ strikeouts. It's only the 16th start of his Hall of Fame career in which Verlander has had double-digit Ks and no earned runs.

Verlander has made 22 starts this season. 17 of them have been Quality Starts. He has allowed 0-2 earned runs in twelve of those starts. Verlander's three starts since the All-Star Break: 18IP, 14H/4ER, 30K:4BB, 2HR allowed, 2.00 ERA / 1.00 WHIP. Verlander finessed his way through the Oakland lineup:
I mixed them up quite a bit. Most of the time when I'm out there, I try to let the batter dictate the path I'm going to go with my pitch selection and trust my instincts. I threw quite a bit of offspeed today. They showed that they were being aggressive. They seemed aggressive throughout the game.

Extract whatever you want from this.

*Jose Altuve and George Springer both homered. It's Springer's first home run at Minute Maid Park since June 26. Jose Altuve went 3x4 and with a double and a home run and is now hitting .287/.342/.511. On June 20 he was hitting .235/.318/.451. He has raised his OPS 84 points in 27 games. He has ten multi-hit games in July alone. Altuve, on his 2-run home run:
It was special because it was two runs and the game was on the line, and we have Justin on the mound and we all know everything we can give him. He's going to take advantage and he proved it...He's the best pitcher in the big leagues and it's really fun to play behind him.

[Gerrit Cole twitches and scratches at his neck]

*Robinson Chirinos was 1x2 with a double and an HBP. He now has at least one hit in his last five starts and has eight hits in his last 15 ABs.

*'Litos should be back on Friday.

*Brian T. Smith: The Astros' outfield is basically a brotherhood.

*Here's a really cool story about the Gurriels and the support they all offer each other on a daily basis. Yuli:
Every day and every night, (Lourdes and I) try to help each other and talk after each game. He tells me what I did wrong. I tell him what he did wrong and what we need to improve upon and all that. Every day we're constantly trying to get better.

Combined Los Gurriels have 38 home runs. The single-season home run record by brothers is 61, with Jason and Jeremy Giambi.

*Jake Kaplan: Neither Hinch nor Luhnow seem to be concerned about not having a lefty in the bullpen. What's the state of the bullpen a week out from the Deadline?

*Ken Rosenthal wonders if the recent setbacks by the Astros' top prospects (Whitley and Bukauskas) will ruin their Trade Deadline.


*Jeff Passan: Just about a week before the Trade Deadline, why has it been so quiet?

*Heads-up alert: The Mets may now be willing to trade Noah Syndergaard AND Edwin Diaz.

*The Astros are still on Madison Bumgarner's Strategic No-Trade list.

*The Cheatin-Ass Cardinals are celebrating the 2004 NL Champion Cardinals prior to the Saturday game against the Astros. This is Next-Level Petty, and I'm here for it. I hereby petition the Astros to hold a Welcome Home From Prison Chris Correa ceremony prior to a June 2020 game, preferably against the Cardinals. Feel free to refer back to this 2015 post if you feel like getting all riled up about Missouri.

*On Sunday, HOF Induction Day, The Daily Beast highlighted the politics of Mariano Rivera. Yesterday he defended himself.

*The Cut: The most gullible man in Cambridge.