Cameron Maybin only had 13 hits - including the postseason - for the Astros in 2017. Four of them were home runs.

Ultimately, Fiers' final game was ugly: 3.2IP, 10H/8ER, 5K:1BB on September 13 at Anaheim. Luis Valbuena took him deep for a 2-run 1st inning home run, which Valbuena predictably bat-flipped. Next Valbuena plate appearance saw Fiers throw over Valbuena's head (Valbuena would get a double later in the AB), which resulted in a 5-game suspension that Fiers did not appeal. He didn't pitch for the Astros again. On a related note, remember that Brett Oberholtzer threw at A-Rod in June 2015, got ejected, and got sent to Fresno after the game. He made one more start for the Astros and then was traded to Philly for Ken Giles later in the offseason. This has sort of been a theme, albeit with some exceptions - Lance McCullers comes to mind - in which a pitcher who intentionally throws at/near a batter gets (wait for it...hold...HOOOOLLLD) fired.

Fiers was projected to make $5.7m in arbitration this season, $800,000 less than Jose Altuve. Fare thee well, Mike Fiers, you held it down when the Astros really needed it.

*40-Man Roster subtractions since the Astros WON THE WORLD SERIES:

*The Astros are planning a "full-court press" for Shohei Ohtani. Jim Crane:
We'd certainly be interested. Based on everything our guys have seen, he's got really good stuff and he could be a top-of-the-rotation pitcher, and he's got a bat. We need a left-handed DH, so there you have it.

Take a moment to breathe into a paper bag. Reports are that Ohtani is in Los Angeles and could begin interviewing teams next week. The deadline to sign him is December 22.

Jon Paul Morosi reports that Ohtani will be looking for opportunities to pitch and hit. Eno Sarris notes that keeping Ohtani healthy will be a key recruiting point and, even after the Rotation Wreck of 2017, the Astros rank 2nd overall in a composite DL study.

I swear, if Yuli Gurriel's actions in the World Series cost the Astros...

*MLB.com is celebrating "Statcast Star Gary Sanchez." This is how I celebrate Gary Sanchez, and will launch a GoFundMe later today to raise funds erecting a statue outside Minute Maid Park of his greatest Astros moment: 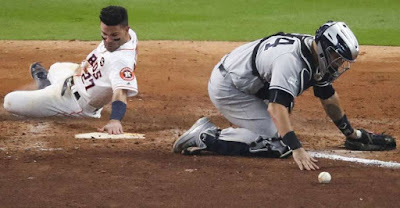 *Jon Heyman's "Inside Baseball" notes consist of hard-hitting insider information regarding Dallas Keuchel switching agents, and organization-wide disappointment after the Not Events of July 31.

*Former Astros Great Aaron Boone is the new manager of the Yankees.

*YEAH JEETS: The Marlins fired a hospital-bound scout days after he had surgery for colon cancer and who is also awaiting a kidney transplant.
Posted by Astros County