*The Michael Brantley re-signing is officially official. Among the things he said on a Zoom call (of which I was not a part, hmph):

-He signed, in part, out of respect for Jim Crane.

-His teammates thought he was going to Toronto, as well. As did he, but Brantley feels as though he has "unfinished business" in Houston.

*Carlos Correa has personally reached out to James Click to indicate that he wants to stay in Houston beyond 2021. Click is "obviously" very interested. As am I. And damn if it didn't take Correa's response to the worst scandal in franchise history to bring me on board.

*Apparently I missed that the Astros traded Cionel Perez to the Reds for a minor-league catcher. Watch Cionel Perez carve up the NL Central where only like two teams are trying to win their division.

*SI's Emma Baccellieri: How should we (the rest of baseball) feel about the Astros? It's complicated.

*Arizona has asked MLB to delay the start of Spring Training due to the high positivity rate in Arizona. MLB basically told Arizona to piss off. The Cactus League said "okay."

*The Hall of Fame will announce the Class of 2021 on Tuesday. Among David Schoenfield's look at 40 current MLB players on a HOF trajectory, we see Current Astros Greats Justin Verlander and Zack Greinke as Locks, Gerrit Cole and Jose Altuve as On The Right Path, and Alex Bregman and Carlos Correa as Have Some Work To Do, with Yordan Alvarez as The Next Generation. I swear the thought of the 2019 Astros, with seven Hall of Famers and no World Series, makes me want to throw a kitten in a river.

*My new favorite NFL team, the San Francisco 49ers, have increased their ownership in my beloved Leeds United, to 37%. Leeds play Newcastle at 12pm Central on Tuesday.

*You can watch Hank Aaron's memorial service at 12pm on FoxSportsGo on Tuesday.

*Vice: The furniture salesman who saved Houston. You already know who it is.

*One of my favorite bands is Travis. NME interviewed lead singer Fran Healy on what he remembers from his own career.

*A bunch of Redditors (a site which I previously thought was just for planning murders and whatnot) made GameStop's stock price soar in an effort to screw over hedge fund managers trying to short it.

*Before we go, it's time for another installment of Hello, I'm A Massive Nerd! Let's get to it: 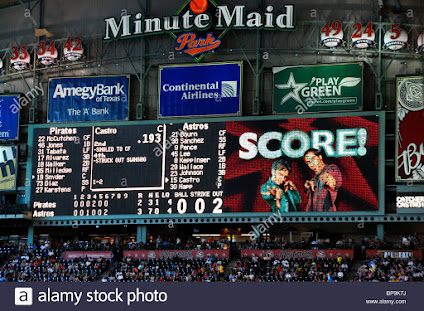 1. The Astros are hosting the Pirates, and Jason Castro is up to bat, hitting .193. The Astros are up 3-2 in the 6th. Some other names we recognize that can narrow down that window: Hunter Pence, Carlos Lee, Jeff Keppinger, Chris Wallace, J.A. Happ.

3. JA Happ (and Jonathan Villar and Anthony Gose) was acquired from the Phillies for Roy Oswalt on July 29, 2010. Anthony Gose was immediately flipped to Toronto for Brett Wallace, who is hitting 6th in this game.

7. We see from the picture that Jason Castro is hitting .193, he singled in the 2nd and struck out in the 4th. The Astros have put two on the board in the bottom of the 6th. If we go back to the box score for that August 13, 2010 game, we find that Castro singled to CF in the 2nd off of Jeff Karstens, but Karstens struck Castro out to end the 4th inning.

8. We know that the Astros were up 3-2 when Castro comes to bat. The Astros started the 6th Inning down 2-1. Hunter Pence hit a ground-rule double to lead off the inning. Carlos Lee flied out to deep RF for the 1st out, sending Pence to third. Jeff Keppinger hit a sac fly to score Pence. Brett Wallace got hit by a pitch (the only time the Pirates hit Brett Wallace at home). Chris Johnson singled through the left side to move Wallace to 2nd. Jason Castro singled through the right side to score Brett Wallace and Chris Johnson to give the Astros a 3-2 lead.

10. Send me a picture of a scoreboard and I will absolutely do this again.