Today in "Hello, I Am A Massive Nerd"

It's been a while since I've posted anything on this web site because it has been a while since there has been anything Astros-related to which I could respond. SO, I thought I'd let you take a look at how I blow off some steam. Some people use drugs recreationally. Others hunt humans for sport. Not me! I try to find random pictures of scoreboards to tell exactly when that picture was taken, and I thought I'd walk you through the process of how I do it. You do not have to read this.

1. Start with the image. It's very important that, if the image on the Google Search comes from a newspaper article, to skip past the date of the article. Just load the image into a new tab. Here's one. Like I said, it's very random. 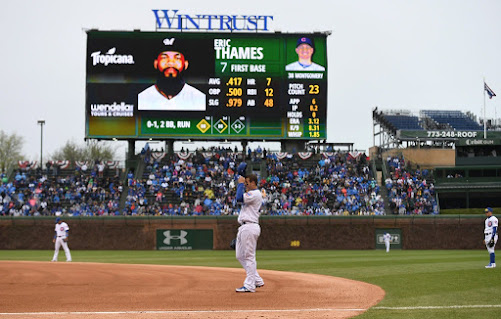 So how do we begin? Let's start with what we know:

1. This is Milwaukee at Wrigley Field. Look at the ivy, for crying out loud. Even if you didn't know what the outfield wall of Wrigley Field looked like, you can see the phone number for the rooftop seats and see that the area code is 773, which is Chicago. We know it's Milwaukee because Eric Thames is wearing a big ol' Brewers cap. If you didn't know that, then perhaps this is not the exercise - or web site - for you.

6. To the next, and final point: At what point of the game was Eric Thames up to bat after going 0x1 with two walks and a run scored at Wrigley Field on April 19, 2017? We see that the Cubs pitcher is named "Montgomery." That's Mike Montgomery, who threw 1.2IP in relief of Tommy Milone's 5IP start. If we look really close, Montgomery has already thrown 0.2IP and was sitting on 23 pitches. This is either the 6th or the 7th inning. Just simply by looking at the box score of the game (linked in Item 5), we know that the #2-hitting Thames drew a walk in the top of the 1st inning and scored a batter later on Travis Shaw's 2-run home run. Thames also drew another walk in the top of the 3rd, and grounded out to end the top of the 4th inning. There is our 0x1, and we already have the two walks and the run scored. Montgomery pitched to Thames in the top of the 6th with two outs. Thames would go on to ground out with the bases loaded to end the 6th inning.

Please still be friends with me.