Every book, movie, tv show, play, whathaveyou has a villain. Someone with varying motivations that is doing something that society can pretty much agree is wrong. You were rooting for Iosev Tarasov's demise because he killed John Wick's puppy - a present from his dead wife! - over his car. Simon Gruber could certainly have robbed the Federal Reserve had his hubris not gotten in the way and John McClane and Zeus Carver got in his way. When there is a villain, there is balance.

-The Astros, up 3-2 in the ALCS over the Yankees, had a 4-2 lead in the top of the 9th. Roberto Osuna, the closer acquired at the 2018 trade deadline with an - ahem - checkered past who brought out some Extremely Strong Feelings, allowed a single to Gio Urshela, struck out Brett Gardner, and then got tagged for a game-tying home run on the very next batter. He rallied to strike out Aaron Judge and got Gleyber Torres to fly out to end the inning. Osuna's Ken Giles/Brad Lidge cosplay was only bailed out by Jose Altuve in the bottom of the 9th.

Which brings us to the beer/champagne-soaked post-game pennant-winning celebration. Monday night Sports Illustrated's Stephanie Apstein published a story which set the scene as such:
More than an hour after Jose Altuve won the Astros the pennant, the party in the Houston clubhouse still raged. Rightfielder Josh Reddick crushing vodka Red Bulls (Ed. Note: Of course he was), Gerrit Cole smoked a cigar. Shortstop Carlos Correa gazed lovingly at the American League championship trophy.

And in the center of the room, assistant general manager Brandon Taubman turned to a group of three female reporters, including one wearing a purple domestic-violence awareness bracelet, and yelled, half a dozen times, "Thank God we got Osuna! I'm so f---- glad we got Osuna!"

The outburst was offensive and frightening enough that another Houston staffer apologized. The Astros declined to comment. They also declined to make Taubman available for an interview.

Well, the Astros eventually commented, later Monday night:
The story posted by Sports Illustrated is misleading and completely irresponsible. An Astros player was being asked questions about a difficult outing. Our executive was supporting the player during a difficult time. His comments had everything to do about the game situation that just occurred and nothing else - they were also not directed toward any specific reporters. We are extremely disappointed in Sports Illustrated's attempt to fabricate a story where one does not exist.

This statement is garbage, and might as well close with, "Love, Brandon."

Yahoo's Hannah Keyser confirmed Apstein's report. So did the Houston Chronicle's Hunter Atkins. Let's not forget that Atkins got into some hot water by over-reporting, not by making crap up. 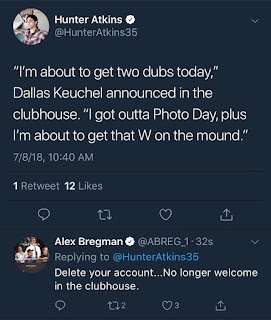 Taubman was "holding a cigar and standing with two or three other men when he yelled his comments, two eyewitnesses said."

We're in an age where any report that does not present you in the best light can be dismissed as Fake News, and reporters know that. Simply making up a story, especially about a team that is getting ready to host Game 1 of the 2019 World Series, is a career-ender. Why would Apstein write a story that wasn't true in a room full of other reporters, with cameras and other recording devices? That's a career-ending move. Why would two other reporters corroborate an untrue story?

The report was dismissed by a lot of Astros Twitter because they simply couldn't believe it was true. That's a fair take: how could Taubman possibly react in that way? At best, he's a douchebag and was drunk. At worst, he was extremely confrontational and targeting female reporters by bringing up Osuna again.

And this is what I don't understand. Taubman, a Cornell graduate, a former analyst for Barclay's Investment Bank, and a derivative valuation expert for Ernst & Young, is/was a self-described "really big fantasy baseball nerd". The linked article from Jake Kaplan was published in March 2018 - four months before the Osuna trade. Kaplan:
Daily fantasy sports leagues were still in their infancy in 2012 when Taubman, now the Astros' senior director of baseball operations (He was promoted to assistant general manager in September 2018) recognized an opportunity to outsmart the competition. He and a close friend developed a projections system that produced the combination of players expected to net the day's highest possible score, while still adhering to the site's salary cap.

It's simple enough to understand how and why the Astros traded for Osuna - and while we don't know the level of involvement Taubman had in this deal, he got promoted six weeks after the Osuna trade: Ken Giles wasn't getting it done. He punched himself in the face on national tv after cussing out A.J. Hinch on the mound (it just hit me how crazy that story is after typing out the short version). Roberto Osuna was young, under plenty of years of team control, and a really effective reliever. The market was depressed. The competition was outsmarted. Osuna has been better in Houston than he was in Toronto. These are facts.

But the Osuna trade was Day Zero for a lot of Astros fans. Not too many people cared for Carlos Gomez or the trade, but it was a baseball decision that could have paid off - and I firmly believe that, were it not for Gomez's oblique strain - the hindsight would be a lot different. But pretty much everyone has entrenched their opinions on Osuna and the Astros. Opinion (unscientifically-researched) runs the gamut from:

The rest of baseball seems to be firmly in Camp D. And that's how we find ourselves, as Astros fans, suddenly - or not so suddenly - the villains in the World Series, a strange place for a team with Jose Altuve, Michael Brantley, George Springer, Will Harris. Even Alex Bregman haters can agree they'd love to have him on their team. Bregman hate is a Baseball Decision. Yet here we are, the villain.

There have been plenty of Baseball Villains over history. The Yankees, because of all the money they spent on free agents, are the most popular target. The Astros are the villain today, not because they pay free agents (though the irony of tears of Yankees fans claiming the 2019 Astros team was "bought" were deliciously salty), but because of the actions of an assistant general manager.

There is simply no reason to think the report is not true. The downside of being wrong far outweighs the upside of getting it right. I do not think Brandon Taubman will face any real consequences - that's not really what the Astros do. But the story remains that, an hour after the Astros won their second pennant in three years, an assistant general manager went out of his way to be confrontational towards female reporters over a player acquired 15 months ago who was credibly accused of domestic violence.

I don't really care who fans of the other 28 teams whose favorite teams' seasons are already over want to win the World Series. But there's the balance: you watch because you want to see someone succeed, and you want to see someone fail. There's always a hero and there's always a villain. The Astros now know their role. For the 24 players not named Roberto Osuna, and this is the benefit, I guess, it's through no fault of their own.

Sometimes, even a die-hard Astros fan can say "F this team," and then nine hours later hope they beat Max Scherzer.
Posted by Astros County