Well that was something. According to Win Expectancy, when Bregman struck out swinging in the 5th, the Astros had a 5.3% chance of winning that game. Fast forward a Yuli grand slam and some more hits and the Astros come away with an 11-10 win in 10 innings. Houston goes into the Break with a 57-33 record.

*The Astros have a .633 win%. Amazing because they've had about 70% of a starting rotation this season. If they get that rotation to, like, 80-90%? Shoot. Astros going undefeated in the 2nd Half.

*I guess we can begin with what, I feel, should have been the go-ahead run: Marisnick's sliding play at home. While I know that Twitter videos are trash, this is the best one I can find, as it shows multiple angles and you get an idea of what Marisnick might have been thinking:

Here are several different angles of the collision at home between Jake Marisnick and Jonathan Lucroy. Marisnick went right to Lucroy’s side after he touches home. Lucroy was carted off after a scary sight at Minute Maid Park. #TakeItBack pic.twitter.com/KixPkDI6vM
— SportsTalk 790 (@SportsTalk790) July 7, 2019

*It felt to me as though Marisnick thought that Calhoun's throw was going up the line, so he committed to slide towards the inside of the plate. Lucroy caught the ball (good throw, Calhoun, though it pains me to say that) and tried to get in front of Marisnick. There are some issues here, which we will explore further. It did not feel malicious, to me. I'm not exactly an impartial observer, but I feel like I'm fair when it comes to criticisms of the Astros.

Notably, Rule 7.13 was passed prior to the 2014 season. It says:
-A runner may not run out of a direct line to the plate in order to initiate contact with the catcher...covering the plate. If he does, the umpire can call him out even if the player taking the throw loses possession of the ball. 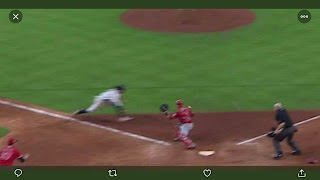 Verdict: It looks, again, to me, that Marisnick got out of a direct line in order to avoid contact with Lucroy. Lucroy receives the ball with his glove - the outside of the basepath as Marisnick approaches the plate - and Marisnick, in a split-second decision, thought the throw might take Lucroy up the line and away from the plate, so he dove to the inside.

-The catcher may not block the pathway of a runner attempting to score unless he has possession of the ball. If the catcher blocks the runner before he has the ball, the umpire may call the runner safe. 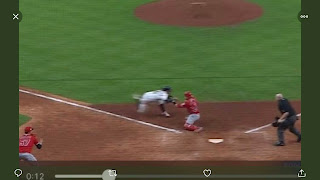 Verdict: Lucroy was in possession of the ball, but was blocking the plate before he had possession. This is what forced Marisnick to pivot off his right foot and dive toward the mound side of the plate. Lucroy dove back toward the inside in order to tag Marisnick. Jake Marisnick is listed at 6'4" 220lbs. Lucroy is listed at 6'0" 200lbs.

-All calls will be based on the umpire's judgment. The umpire will consider such factors as whether the runner made an effort to touch the plate and whether he lowered his shoulder or used his hands, elbows or arms when approaching the catcher.

Verdict: Marisnick did put his arm up but only after Lucroy got back into the trajectory in which Marisnick had already decided upon. Getty's Bob Levey got this great photo of the actual impact: 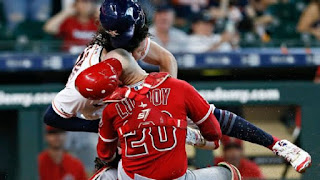 Note that Marisnick's arms aren't targeting Lucroy at the moment of impact. I guess my Takeaway is that it was an unfortunate collision, but Marisnick was trying to score the go-ahead run in what was a dramatic comeback, and Lucroy was trying to prevent the Astros from scoring that run.

Angels manager Mike Scioscia Brad Ausmus thinks Marisnick deserves a lengthy suspension. Ausmus:
It certainly didn't look like a clean play...It looked like Marisnick took a step to the left and bowled into him with his arm up. The call was right. MLB should probably take a look at it and consider some type of suspension quite frankly.

Let's back up a minute and see the first part of this quote: Ausmus
It certainly didn't look like a clean play. I don't know what actually happened....

So it's confirmed: Brad Ausmus should shut the f up.

On Instagram, Yadier Molina had a few words to say:
MLB (needs) to take action on this Bullsh*t play! Fu*k! Praying for Lucroy! slide slide slide fu*kkk (sic)! F*ck u if u think this is Ok..F*ck u!

Marisnick, in his own words:
Through my eyes I thought the play was going to end up on the outside of the plate. I made a split-second decision at full speed to slide head first on the inside part of the plate. That decision got another player hurt and I feel awful. I hope nothing but the best for [Lucroy].

*The Astros were down 7-2 at one point. Their previous largest comeback was a 3-run deficit, so that's a nice little building block for the 2nd Half. Previous records/leads at the All-Star Break:

*Alright, to the game. The Astros were 6x22 w/RISP. I have a Baseball-Reference Play Index subscription, and I don't know how you look up the record for hitting with runners in scoring position, but I can't imagine that 22 ABs w/RISP is not somewhere high on the franchise record list.

So obviously this means the Astros have never had two different players enjoy a five-game homer streak in the same season before this season.

*Bregman (2BB) and Chirinos were the only batters to have multiple PAs and not get a hit.

Anyone in the organization feel like stepping up and doing something for the rotation? No? Okay.

Let's recap the Astros' pitching depth coming into this season (this will be the subject of a lengthier post in the next three days):
-Justin Verlander: Great, gives up too many homers this season. Still awesome.
-Gerrit Cole: Better than Verlander, sign him to all the moneys
-Wade Miley: Brent Strom solidified his Legendary status:
-Brad Peacock: Hurt
-Collin McHugh: Bullpen

*Here's Jake Kaplan on why splitting Verlander and Cole makes sense. Coming out of the All-Star Break, Hinch is going with TBD (Thursday) then Cole, Miley, and Verlander, followed by another TBD on Monday. Hinch:
We'll see if the high fastball that Verlander throws followed by someone who doesn't elevate a ton (in Miley), followed by somebody who can do everything (in Cole) - we'll see if that's a combo we like.

Chandler Rome: J.B. Bukauskas knows he has absolutely jelly-dicked around this first three months of the season. Bukauskas:
I think we all had a little bit too high a standard for ourselves coming out of Spring Training, if that makes sense. Because then, as soon as there's any sort of failure, it's like, 'Oh, my gosh. What's going on?'...I think we need to take it all as a learning process and learn to adjust and develop and keep getting better.

*J.B. Bukauskas did not pitch in the Futures Game.

*FanGraphs: The physics of losing a fly ball