Hey it's your pal James here. Sorry for my caterwauling yesterday, but it was necessary. Anyway, I'm giving Flick a three-day reprieve from the Blogging Conclave. The Astros did not play last night. They are 29-15. Earlier this week I won Whataburger from a co-worker because the Astros swept the Rangers (if the Rangers had split or won the series, I would have been buying). Today is the beginning of the second of three bets with the same co-worker: if the Rangers are ten games behind the Astros at any point after May 17, he buys Whataburger. Houston is 8.5 up on Arlington. Third bet: the Astros will finish 25.0+ games ahead of the Rangers. I love making bets with Dallas homerz who barely watch baseball.

*A side story that I also put on Twitter last night: On the day our daughter was born, we gave her a little stuffed lamb that she eventually named Bob. She carried Bob with her wherever she went. About three years ago, my wife was away for the weekend and my daughter and I made a Whole Thing about it: baseball game, ice cream, museum trips, etc. When that weekend was over, we noticed we didn't know where Bob was. It was An Ordeal. Ultimately, I was able to get a Replacement Bob from Amazon, but it wasn't the same. One night, my dear wife told me that she wished I would have told her that I cheated on her rather than Bob getting lost under my watch. I felt the predictable Shame, but I knew I didn't lose Bob. Fast forward three years to last night. Daughter comes into the living room after brushing her teeth and says, "Bob looks weird." And he did! He looked like he needed to get thrown in the washing machine. Then she says, "Why is he different from the Bob in bed?" And I yelled, "There's another Bob in bed?" And she looks at me like I'm crazy and says, in the way that only she can, "Yeah." So I sprint to her bedroom (not a good idea: my knee still hurts from that half-marathon) and, sure enough, there's the Newer Bob. I sprint back into the living room and she's holding Janky Bob. I ask, "Where did you find him?" And she says, "Oh for the life of me I can't remember." She's six years old, talking like she's in a got dang Danielle Steele novel. She has no idea where she was when she came across the Actual Bob, but by God, he's back. Skros gonna win the World Series this year. Bob has made it so. #WorldSeriesBob

*Yesterday I wrote up how the Astros' bottom of the order is producing in historic fashion (just not *as historic* as the 2019 Twins' bottom of the order, which is kind of a bummer. Also the 2019 Astros are out-pacing the 1927 Yankees from top-to-bottom. Good day.) The Athletic didn't want it, so here you have it for free.

*Richard Justice: How George Springer became the "heart and soul" of the Houston Astros. Jake Kaplan has a great piece about why Springer has gotten more starts at DH in 2019 than he did in all of 2018.

*Jon Tayler says Forrest Whitley, who has really struggled in Round Rock so far, could make his Houston rotation debut around mid-season.

*Yeah the balls are different but Yordan Alvarez was 3x6 with 6RBI last night for Round Rock with two home runs and a double. He's hitting .410/.497/.903 with 30K:22BB. Take that for what you will. He will be 22 at the end of June, and the Astros got him for Josh Fields. A scout Peter Gammons knows mentioned "David Ortiz" when talking about Yordan.

*MLB.com's Jason Beck says it's way too soon to determine who won the Verlander trade. (Hint: it's the Astros).

*The Ellen DeGeneres Show asks this question:
Are you [an Astros] fan who lives in the Houston area, and could use help from Ellen? We want to hear your story! Share your personal story of why you think you deserve financial help, tickets to your favorite MLB game (Let's Go Astros!) and more. Tell us your story here!

While I could use some financial help [side-eyes The Athletic] I don't live in the Houston area, and also there are many more who are deserving than I am. So have at it. Make some dreams come true.

*Need another Astros shirt from BreakingT? 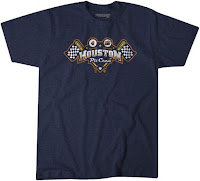 *Not-paywalled article from Craig Goldstein: On the end of the beginning of baseball season.

*Tyler Kepner: The Rays are a surrealist's delight.

*The Orioles had their Buttslide moment.

*The Square Ball, on Leeds' defeat to Derby, and the defeat which comes for us all.

*Complete Whack-Job/Absolute Delight Mike Leach teaches a class at Washington State called Leadership Lessons in Insurgent Warfare and Football Strategies. One assignment was to draw up some plays. Mike Leach graded them.

*Eater: The Myth of Authenticity is Killing Tex-Mex.

*Drew Magary: The Night the Lights Went Out

The Hot Links playlist on Spotify now contains almost seven hours of music, if you're into the kind of music I like.
Posted by James