Sunday Morning Links That Are As Hot As Your Toasted Bagel

At the bottom of the Saturday Morning Hot Links, the Constable informed all three of our readers that there would be no Sunday Morning Hot Links because he was unavailable.  Well, he didn't factor in some annoying busybody stepping in write a vastly inferior set of Hot Links.  Constable, enjoy your morning off.

* The mighty Houston Astros continued to to carve through the Rest of Baseball with a 5-2 win over the Orioles.  We will summarise the games' big moments shortly, but for now, let's take a look at what this means, in bullet-point format:


* Dallas Keuchel returned in the minimum time from a 10 day DL-stay due to a pinched nerve in his neck.  He lasted six innings (86 pitches), striking out 8 and walking two.  He allowed one earned run on 4 hits.  The runner who scored walked with two outs in the top of the third frame.

* I was interested in the need for the quick-ish hook for Keuchel (6 innings, 86 pitches) aside from the whole return-from-the-DL thing.  I also got the impression that in the early going, he was locating down consistently, whereas he seemed to be elevating later in the game - or at least not painting the bottom of the zone and below.  Brooks Baseball helped out a little with strike zone plots from the first two innings... 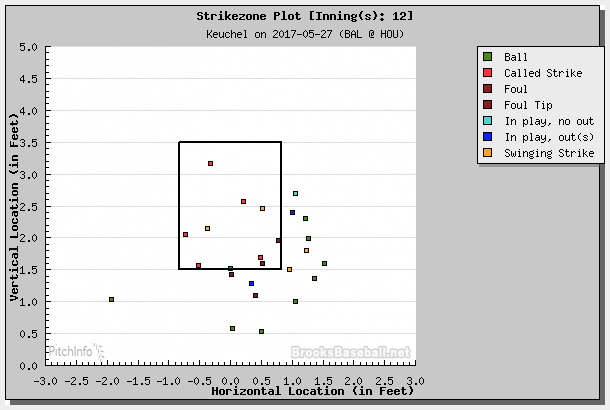 ... and then from the fifth and sixth innings: 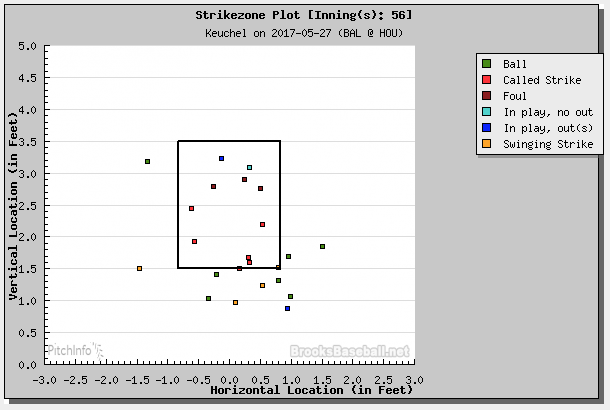 So Keuchel perhaps was elevating a little later in the game.  I guess this raises concerns around him not finishing his pitches off, and concerns about ongoing neck or shoulder pain / pathology.  Shoulder pain has been cited as being the main reason for his 2016 struggles, and shoulders and necks are closely linked, so it is possible that he wasn't feeling that comfortable, or that some mechanical changes crept  in later in the game that AJ factored in when making the decision to remove him.

(Obvious caveat here - Keuchel threw sinkers pretty much the whole time in the first two innings, and a much higher proportion of offspeed pitches the second and third time through the order.  So that may account for some of the location changes).

* Replacing Keuchel in the sixth (and pitching with a lead of less than 10 runs for the first time in a while) was Tony Sipp.  He allowed a long triple to Chris Davis on a pretty fat pitch, so this appearance didn't go well.  Sipp has been better lately, but the Astros still appear to be without a situational lefty.

* More slightly-odd pitching decisions - James Hoyt relieved Sipp and finished the sixth, including allowing Davis to score on a brutal wild pitch.    Then Hoyt stayed on to open the seventh, where he threw to one batter.  Hoyt wasn't exactly dominating - he seemed to have trouble locating with both his fastball and his slider.  Then Luke Gregerson relieved Hoyt to finish that frame.  Very weird, especially because I see Hoyt and Gregerson as quite similar pitchers - not sure why Gregerson wouldn't get to open the inning himself.

* Will Harris earned the save with a perfect inning involving two strikeouts.  Devo and Giles were presumably unavailable.

* Also returning from the DL - Brian McCann, who caught Keuchel, while going 0-2 with two walks at the plate.

* Springer scored in the first on a long double off the CF wall by Altuve.  He rounded third as the second baseman gathered the relay, but an impressive slide saw him beat the tag.  Springer followed with a long home run into the LF power alley - the ball must have rattled near the train for a while, 'cause it too a long time to come down.

* Amusing moments during the seventh - the crowd starting chanting "Rally Bird" because of the presence of a small bird that hung around on the infield grass near third base.  It looked plenty comfortable there.  Rally Bird must be a thing, because the Astros won.  At least Julia Morales didn't have to eat any insects this time.  Also: birds eat insects.  So perhaps eating insects is the key for the 2017 Astros.

* Check out this catch from Carlos Correa.  Wow.

* Finally, this game was televised nationally on Fox.  The colour-commentator was none other than ex-Astros great Preston Wilson.  Astros fans of last decade will remember him - Wilson was signed as a free agent to the Astros for the 2006 season to play left field.  I recall "Fast Eddie" Wade talking about how he may hit 50 home runs at MMP because of the short left field porch.  Well, Wilson was good for a .269/.309/.405 line in 416 PA's, managing only nine home runs.  He was subsequently traded to the Cardinals where he showed some late-season life, hitting 8 home runs in 120 PA's.  He retired after a partial season with the Cards in 2007.

Aside from that, I quite enjoyed listening to Preston Wilson.  I couldn't listen to him every day, but he was interesting, reasonably slick and friendly, and he was strong on the technical details of what he observed, especially the outfield defensive plays.  He certainly isn't the worst colour-guy on the national baseball circuit.

* AC favourite Bradley J Peacock and his 2.00 FIP will remain in the rotation, apparently at the expense of Mike Fiers and his 7.56 FIP.  Fiers heads to the bullpen.  This is going to be interesting, as Fiers out of the bullpen for Houston has generally not been good in very limited duty - 8 earned runs in 9 innings for Houston over 2015 and 2016.  I recall one awful relief appearance in Arlington when Lance McCullers got bounced early and Fiers gutted out a few innings while giving up a bunch of runs, but I don't recall Fiers ever being particularly good out of the 'pen.

* Jim Bunning, HoF pitcher for the Tigers and Phillies passed away.  Bunning's most recent time in the public eye came as a US Senator from Kentucky.  He died from complications from a stroke suffered in October last year.

* Jameson Taillon is going to return to the mound again, less than three weeks after surgery for testicular cancer.  He begins a minor league injury-rehabilitation assignment in AA Altoona.  Best of luck to Taillon - hopefully he avoids chemotherapy.

* Ex-Stro Nolan Fontana hit his first ML Home Run for the Angels against the Marlins.  The Astros thought Fontana was all about the strike zone judgment, but he has instead busted out as a power hitter.  Another black mark for Houston in the "player evaluation" column.

* And because we are starved of Astros-related news: two Yankees did something cute!! Let's post it on all of the prominent media outlets' baseball home pages, shall we??  Sigh...

* Lastly, the worst strikeout of all time.  Josh Fuentes (the batter) could have started for the 2012 Astros.  In the four-spot.

Hope you enjoyed reading.  With any luck, the Constable will return tomorrow.