Billy Wagner Gave Up An Inside The Park Grand Slam

Billy Wagner, as you may recall, was a very good pitcher. In 1999 he was such a great pitcher that he came in 4th in the Cy Young voting and 16th for MVP. But as the great Howie Day once said, even the best fall down sometimes.

On July 21, the Astros held a 2.5 game lead over the Cincinnati Reds. That night, they hosted the Arizona Diamondbacks, who were a game and a half back of the San Fransisco Giants out in the the NL West. Houston sent 23-year-old Scott Elarton to the mound to try and push their NL Central lead even further.

Elarton, who would end his first full big league season 9-5 with a 3.58 ERA, was okay. In only his fifth start of the season after moving from the bullpen, the lanky right-hander buckled down after allowing two runs in the first to go five innings and leave with a 4-2 lead thanks to a three-run Jeff Bagwell homerun in the bottom of the fifth.

Trevor Miller worked a perfect sixth, highlighted by a strikeout of fellow lefty Steve Finley. Miller then worked a non-perfect seventh, giving up an RBI single before being relieved by Jay Powell, who escaped a bases-loaded jam by inducing a Matt Williams pop-up to short.

Powell came back out for the top of the eighth and promptly issued two walks and hit a batter. With two outs and the bases loaded in a one-run game, manager Larry Dierker called on Wagner to get a four-out save.

The 5-10 Wagner peered in at the equally diminutive Tony Womack. With an 0-2 count, Womack choked up on his bat in an attempt to at least touch a pitch from Wagner. Wagner cocked his left arm back and fired a fastball that caught too much of the plate. Chaos ensued.

Womack was understandably late on an upper-90s fastball, but he managed to poke it into left field. Charging in and playing in just his sixth major league game was Lance Berkman. Knowing the game was on the line, Berkman layed out to try and make the catch. 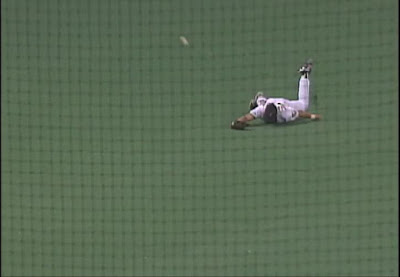 The ball rolled all the way to the wall. Berkman got up and relayed the ball to shortstop Carlos Hernandez, who appeared to beat Womack home. 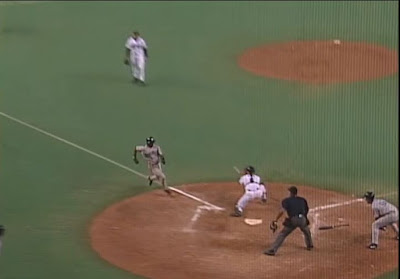 But the throw was just up the line and the home plate umpire signaled "safe." 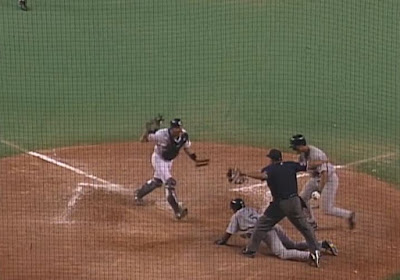 The score would remain 7-4 and the Astros would lose. It was the only loss of the season for Wagner.
Womack finished his 13-year career with just 36 homeruns and only three were off of left-handed pitching.