Astros lost 3-2 yesterday to Baltimore, taking three out of the four-game series. The Angels were off, the A's and Rangers won, and the Mariners lost. So the Astros' lead is at 5.5 games, and FanGraphs gives them a 49.5% chance of winning the AL West, and a nice 69.7% chance of making the postseason.

Of course the big news of the day is that Tal's Hill will be removed after this season. They had been talking about it since Crane bought the team, and Luhnow even mentioned taking it out in 2013, because anything associated with Drayton is not long for this world.

Artistic renderings (drawings, and fat, are the only objects that are "rendered") show that the redesign will cost $15m and include a "central observation tower," a section of seating, and other things that entertain dim-witted or otherwise occupied baseball fans. Centerfield will now be 409 feet, as opposed to 436 feet, from home plate.

Unfortunately the Astros have not as yet taken into consideration our suggestion of turning Tal's Hill into Crane's Canyon. 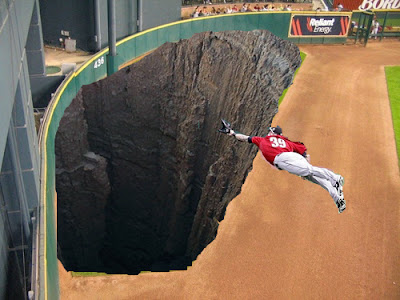 *Ned Yost asked A.J. Hinch to be a part of his AL All-Star team coaching staff.

*Hinch says McCullers is no longer staying in Houston on a start-to-start basis.

*Bob Klapisch lists the Astros as one of his ten surprises in baseball.

*Evan Drellich has a (possible subscription needed) profile on Will Harris.

*Jeff Sullivan talks about the risk/reward of preseason projections.