Hinch the fall-guy as Manfred paints himself into a corner.

Some quick, random thoughts about the Astros punishments handed down earlier today.  Of course, AC already covered this in detail.

A.J. Hinch is the fall guy:  Despite disapproving of the scheme, and damaging the video monitor twice, and being cleared of being the creative genius behind the scheme, A.J. Hinch copped the same suspension as Jeff Luhnow.  It seems that this was a predetermined decision - as clipped from MLB's nine page summary:

It seems that when the Red Sox got busted in 2017, Rob Manfred decided to ensure that management and front office staff would be part of the punishment, presumably mostly as a deterrent to other clubs.  I would think this would stem from the fallout of the Steroid Era - MLB was well criticised at the time in punishing the players, and letting the executives and field staff (who were either aware, or in some cases, assisted the players in using PEDs) off without punishment.  This angered the MLB Players Association, and I am sure that the decision in this case was made partly to appease the MLBPA.

The main counter-argument to this is that Hinch knowingly lied or misdirected people when the Yankees accused them of whistling in the dugout.  My memory of this is that Hinch discredited this for the 2019 playoffs, but it may have been that his comments could have been interpreted as dismissing the entire concept of noise notifications ever having existed with the Astros.  I haven't researched this, but it is possible that someone explores this angle shortly.

Allowing Hinch to serve a one-year suspension, then return to manage the Astros in 2021 would have created an untenable situation for the Astros, especially for whomever is appointed to manage the team in 2020.  So A.J. Hinch is fired.  His failure was one of leadership, but I think he wears the punishment disproportionally in this case.  I feel for the guy - he seemed like a really calm, collected, reasonable manager who made a lot of good, sensible decisions.  The Astros will miss him.

Jeff Luhnow:  The Commish, in his summary, confused the issue in my opinion.  He (i) imposed the same penalty on  Luhnow and Hinch then (ii) made a point of stating that Luhnow, in his opinion, has been unethical in his running of the Front Office for a bunch of other reasons.  He specifically mentioned the following... 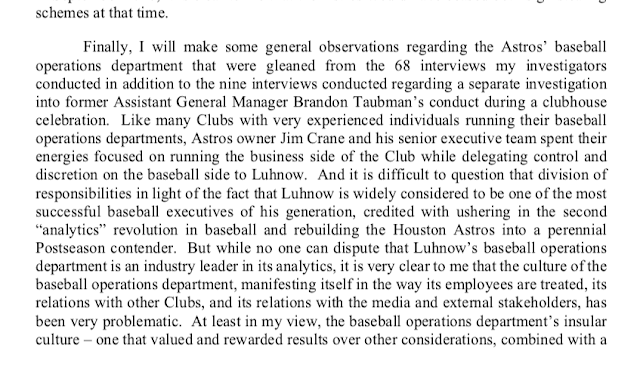 On top of all of that, Manfred's summary indicated that he thought Jeff Luhnow was not entirely truthful about his knowledge of the scheme, noting the following:

And yet, Jeff Luhnow gets the same penalty as A.J. Hinch despite (i) likely underplaying his knowledge of the scheme, and (ii) running a front office that treated its employees and everyone else associated with the game like crap.  I would have thought that this may have drawn a longer suspension.  Or perhaps Rob Manfred knew that Jeff Luhnow would get fired...

Jim Crane is blameless:  Of course he is.  The summary of the report says that about 60 times.  Plus, he (and 29 others) employs the Commissioner of Baseball.  It becomes a massive headache for baseball if the Astros ownership is also implicated.

I am not saying the Jim Crane knew about the scheme, of course.  I am perhaps just a little sceptical in a "the Lady doth protest too much, methinks" kind of way.  Preserving ownership and firing the GM and Manager does not involve serious headaches and forced multi-billion dollar transactions, so even if Jim Crane was the one holding the theragun against the trash can in Game 5 of the World Series, I am not sure the report would have said that.

I have overstated my position of this to make a point, but allowing Jim Crane to clear house in an effort to move on is probably the best way forward for everyone.

We can move on!!  It has been a frighteningly quiet offseason for the Astros.  There has been no free-agent chatter in relation to the Astros this year, and we can probably thank the Grienke trade for hamstringing the club for this upcoming season for the lack of chatter.  But it is also possible that potential FA's want no part of the pox-infested Astros.

The penalties pound the Astros:  These are harsh penalties.  Regardless of how psychopathic you may think Jeff Luhnow is, he is clearly one of the smartest and sharpest executives in the game.  And A.J. Hinch is one of the top few managers in the game too.  The Astros will be without them going forward, which was really the only realistic thing that Jim Crane could do.  The loss of the draft picks is harsh - not only do the Astros lose their picks, more importantly they the majority of their draft budget.  In 2019, the Astros were able to spend just less than $5.4MM, of which around $3.2MM was allocated to the first two picks.  While the bottom of the first round is often not *that* great in terms of baseball talent, this severely restricts their ability to sign talent falling to the later rounds, as they cannot reallocate any of their slot money into that round.  And, to make it sting a little more, the 2020 draft is supposed to be STACKED.  Sigh.

The measly five million dollars pales into comparison.  But that was the most the Commish could fine the club.  I would expect that would be reassessed at the next owners meetings, as pretty much everyone is of the belief that a monetary fine of this amount is simply is not enough to act as an effective deterrent.

The NEXT few months will be the interesting ones:  Rob Manfred has drawn a line here.  It is possible that he drafted the report and decided the penalties before the news of the Red Sox cheating broke.  But now he has a real problem.

Of course, the Red Sox cheated in a different way to the Astros.  As the currently available news indicated, they most likely needed an runner at second base to relay the sign to the batter.  The Astros bypassed that, preferring to communicate directly with the batter via noise, even with no runners on base.  But the Red Sox were penalised for this in 2017, then resumed doing so after they served their penalty.  It is possible that being a recidivist offender will attract a greater penalty from Mr Manfred.

There are a couple of other points that need to be made.  Obviously, Alex Cora is in trouble, and it is difficult to see how he would be employed in baseball in any capacity going forward after this report summary was released.  But the Commish has drawn a line in the sand around draft pick loss and Front Office penalties.  With regards to the latter, Dave Dombrowski is no longer employed within baseball, so he can't be penalised.  Chaim Bloom has only been in the job a few months, so it seems unfair to suspend him.  With regards to the Draft picks, the Red Sox have much greater payroll difficulties than the Astros, and a much weaker farm system, so a similar loss of draft picks may confine them to the AL East cellar for most of the next ten years.

But the Red Sox have a history of escaping serious punishment for transgressions.  The Mitchell Report into steroids failed to mention the Red Sox in any capacity as being a club which harboured steroid users.  George Mitchell held a board position with the Red Sox at the time of the report, which I thought put him in a position if an impossible conflict of interest.  As you can imagine, the New York press corps was not happy.  The Red Sox had Manny Ramirez (since proven as a steroid user) and a number of other players who were widely considered to be dopers at the time, but mentions of current Red Sox players were curiously absent, while the report extensively documented Yankee and Met users.

Where this really becomes interesting is if another team is accused of sign stealing.  From what I have read, it is possible that this all started with the Yankees six or so years ago.  So other teams are clearly likely to have been in on the act.  If another non-tendered pitcher in another organisation makes another accusation relating to the same time period, then Rob Manfred may find himself in a really tough (read: impossible) spot.  If the Yankees or another major team go down (for example) I think the Astros penalties will be reassessed as draconian by all and sundry

This hastens a rebuild:  I am about to do my annual ZIPS Projections Over Time article.  The Astros have a really good 2019 team, even if it has a Gerrit Cole-sized hole in the rotation.  I doubt they keep George Springer after this year, and I doubt Michael Brantley, Yuli Gurriel and Josh Reddick get re-signed as well.  After the 2021 season, Verlander, Grienke, McCullers and Correa are all free agents.  So by my estimation, the Astros will lose their three top starting pitchers and four top position players over the next two years, and I cannot see them filling those gaps out of their current farm system.

Theraguns are cheating:  As a middle aged man who does not exercise as much as he should do, and suffers the fallout of gym sessions for days afterward, I recently invested in a percussive massager (not, sadly, a Theragun).  They are definitely cheating.  I can vouch for that.  They work, and work really well.

I feel like turning the page and moving on:  AC, BatGuy, Jexas, Not Hank and your frequently-absent correspondant have been flicking around a few twitter messages.  All of us are serious Astros fans.  We all felt conflicted during the World Series, and at that point, we only knew about the bizarre Brandon Taubman debacle and self-inflicted fallout.  I have been even more conflicted this offseason - to the point where I have considered giving up baseball altogether - and I regard myself as a serious Astros fan.  This has not been fun.

But now, I feel like I can support the Astros again in good conscience.  A new GM will have "ethics" high up on the interview schedule, and the team will certainly promote better relationships within baseball.  The on-field product is immensely likeable (how can you dislike Jose Altuve??), but whispers around Luhnow and his legendary arrogance have been circulating for most of the last decade.  With any luck, we will finally be free of baseball snark.  Please.

Hey, thanks for reading down this far.  I wonder if AC will turn the comments back on so y'all can flame me below.  But these are just some quick thoughts that I have put together, with an emphasis on considering some areas that the media has not already jumped on.

Enjoy the rest of the offseason.