Apologies for yesterday's absence. It was the first day of school, my kid was super-jacked and woke up really early, and I had to leave early to get to my own classroom. Two things I'll need to reteach myself from this summer (and from last year when my conference period lasted all three lunches):

1) Learn to eat in 25 minutes. I ate half of my grilled chicken and broccoli.
2) Remember that you can't just go to the bathroom whenever you feel like it. Yesterday was the closest I've come to pissing my pants in 30 years.

*Aaron Sanchez threw 46 pitches over 2.1IP. 19 were balls. To the 37-85 Tigers. He left the game with right pec soreness. His titty hurt, and has hurt for "six or seven starts" - something I'm sure the Astros weren't exactly thrilled to hear. Sanchez:
It's been an ongoing thing. I've been trying to push through it. It's been up and down.

So now Sanchez is going on the IL. More Sanchez:
Obviously today when my (velocity) drops the way it did, there's no sense in trying to push through it. Especially knowing where this team is going, and I want to be a part of that down the stretch. So the best bet is to just figure out what's going on and work from there.

*Springer and Altuve hit back-to-back home runs to lead off the bottom of the 1st. It's the 10th time this season the Astros have gone back-to-back. Springer's 10th leadoff home run set a single-season franchise record. It's Springer's 34th career leadoff homer - he needs 20 more to break Craig Biggio's franchise record. Altuve:
We've gotten stronger. I see a lot of homers by Springer when I'm on deck and I love it. I think the fans love it, too. We need to keep hitting homers.

*So of course Monday's game featured Carlos "Mr. Glass" Correa leaving the game in the 1st inning with "back discomfort." Last night's update is that Correa is "likely" headed to the IL. Hinch:
[Correa's] doing a little bit better, but he's not doing well enough to play. I'm not optimistic that he's going to be able to avoid the IL. We'll make the determination tonight and into tomorrow. We haven't seen anything that's made us believe that this is anything major or massive, but it's going to take a couple days - and certainly up to 10 days - to mend.

I am extremely happy that Carlos Correa is an Astro for a long time to come. Carlos Correa is a generational talent, and his career has been extremely weird, given that he's had to deal with numerous fluky injuries to various parts of his body. I would very much appreciate Carlos Correa moving past the Fluky Injury stage of his professional career.

2014: Correa breaks his leg sliding into third at High-A Lancaster.
2017: Correa tears a thumb ligament on the catcher's shin guard while sliding into home. He later re-injures the thumb celebrating the Astros' ALCS G2 win over the Yankees, but deals with it.
2018: Correa misses significant time - and isn't the same for the rest of the season - when he hurt his back.
2019: Correa misses time with a broken rib he suffered during a massage. Then lower-back tightness is about to force him to the IL.

All of these are fluky. But a lot of flukes in five years isn't exactly fluky. I'm not about to say the dude is injury-prone, but I'm saying it's going to take a season of 140+ games to put a lot of this to rest.

Myles Straw got the start at SS for Round Rock last night. So that's how the next 10+ days is going to go. I bet Myles Straw doesn't post a .929 OPS like Correa did in the 22 games since he got activated from his last injury. The reasonable take is that the Astros don't need Correa to win the division, but they will absolutely need him to win another Pennant and World Series. This team should not be satisfied with just making the postseason. I will go to my grave thinking the Astros should have won the Pennant in 2018 but didn't, in part, because Correa wasn't healthy.

*Jake Kaplan looks at who the Astros might call up once September 1 hits.

*Have you seen this shirt from BreakingT? Remember that ya boi gets a small cut of the profits... 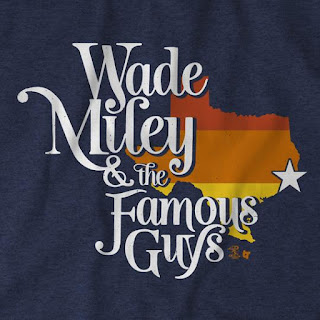 *Hey, why did Miguel Cabrera get ejected on Monday night? Cabrera, who has done nothing to Wrong anybody:
So, after the inning, I was talking to Altuve about [Yordan], because I think the guy is pretty awesome but he's 22, at such a young age, he's really good, he's got a good approach at home plate. And if you see the pitch he threw me out on, it was down. So it's no reason for me to argue that pitch. So I say it's unbelievable how he called the pitch and then he threw me out. I was saying that to Altuve and not the umpire.

Miguel Cabrera is a Hall of Famer, for his baseball skills and also for his passive-aggressive umpire burns. Fire all the umpires and replace them with non-titty-baby automatons.

*Tom Verducci says that Bregman vs. Matt Chapman is a Golden Age of 3Bs.

*Carlos Beltran's 8HR in the 2004 postseason is David Schoenfield's vote for best-home-run-hitting achievement in franchise history. Personally, I'd pick Game 5

*If you can read Spanish, you'll find that Former Astros Great Octavio Dotel has been detained in the Dominican Republic in regards to a little something called Drug Trafficking and Money Laundering. It's not looking good.

*The college student who decoded the data hidden in Inca knots.