What looked to be the dullest trade deadline in recent memory...


Turned out to be one of the most exciting in Astros history. I don't believe we've seen a crazier trade deadline for the Astros. You can read up on all the acquisitions and how the rosters look. There's even a post up on payroll outlook. Things are looking pretty good for 2019.

The Astros have quite possibly the most formidable rotations in the league. Justin Verlander and Zack Greinke are future hall of famers. Gerrit Cole is on his way. Wade Miley is a nice Dallas Keuchel replacement. (Charlie Morton, who?) Whoever slides into the fifth spot will be moved to the bullpen for the playoffs. Which begs the question, "Who is the Astros fifth starter?"

Aaron Sanchez is a candidate. So is, Brad Peacock, when he comes back.  Jose Urquidy is likely getting sent back to Triple A after tonight's start (he was just pulled as I was typing this). My bet is Sanchez will slide into the fifth spot for the time being. Depending on how well he does, Peacock will either slide back into the rotation or move to the bullpen. He was, after all, quite dominate in the 2017 World Series coming out of the bullpen. Sanchez will also likely slide into the bullpen for the playoffs. Again, depending on how well he does over the remaining two months of the season.

Martin Maldonado will replace Max Stassi, who was sent to the Los Angeles Angels for two low level prospects. Stassi is one of my favorite players in baseball, because he created a baseball moment I'll never forget and forever appreciate. While at Spring Training in 2015, he took time during one of his catching defensive drill breaks to come over and hand my daughter a ball. Not throw her a ball or ask her to come to dugout. He came over and handed her a ball. 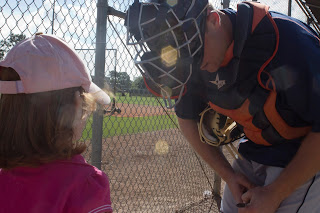 I've rooted for him ever since and will continue to do so even if he's not an Astros. Max Stassi is a saint.

Back to Maldonado. He's the new Jed Lowrie for Jeff Luhnow. After failing to reach an agreement over the winter. The Astros found themselves with an opportunity to re-acquire Maldonado after failing to do so from Kansas City. He provides a small offensive upgrade will keeping the same defensive and receiving skills of Stassi. All this at the cost of a recently DFA Tony Kemp. Which we'll get to in a minute.

How amazing is it that Luhnow in the span of week was able to trade three players either DFA or soon to be DFA. Luhnow found suitors for Tyler White, Tony Kemp, and Max Stassi and got something in return. I have never seen that before and it speaks to the depth of the Astros organization. It's not every day DFA players get traded. Two went to contenders that are very likely to make the playoffs. One went to six games out of a wild card spot. Welcome to the Golden Age of Astros baseball.

Tony Kemp. I'm going to miss him. A lot of people are going to miss him. He's provided us with some great memories both on and off the field. He has set the standard for what a hug should be. I wish him the best and look forward to checking in on Cubs games every once and a while.

Lost in all the acquisitions is Joe Biagini (I had to triple check the spelling of his last name). I love this guy immediately because of this tweet.


We’ll miss you, Joe Biagini. Here’s a few of the lighter moments he brought us. pic.twitter.com/KoM8fAPhgh
— Tim and Sid (@timandsid) July 31, 2019


He looks fun. And more importantly you always have to wonder what Luhnow and Brent Strom are up to when they acquire a pitcher with a 3.86 ERA and a 4.45 FIP and a really good curve that he's only throwing 7% of the time. This on top of Cal Stevenson and the already mentioned Sanchez for Derek Fisher. As Astros County put it, "Derek Fisher. That's it. Seriously. I looked. I looked for a long time."

I had meetings right at the deadline, so I missed the frantic hour after the trade deadline when deals were being reported left and right. I took the next hour to catch up and then drove home with the radio blasting Taylor Swift's new songs ME! and Calm Down (I hope I don't get fired for linking Taylor Swift on this blog. WORTH IT!).

It's been an exciting day. Take it all in, because I don't think this happens again for a long time.