Happy Spring Training Eve, everyone.  Hopefully, in a few days when Pitcher and Catchers report, it will bring to a close The Most Boring Offseason Ever.  In many ways, this offseason has been sponsored by the Astros of old.  The model of tearing down to rebuild-from-scratch is no longer a rarity, and the Astros' methods of evaluating talent and valuing Free Agents may have been instrumental in a number of top free-agents remaining unsigned.  People are whispering collusion, but it seems more likely that teams are getting smarter about who they sign, and for what price.  I mean a team could find themselves with one of Albert Pujols, Eric Hosmer or Chris Davis standing at first base, or have an outfield of Jacoby Ellsbury, Jason Heyward and Alex Gordon backing up a middle infield of Dustin Pedroia and Troy Tulowitzky.  There is a lot of dead money being thrown around in baseball with these old, overpriced contracts, and teams seem determined to not make the same mistakes that the wealthy teams of old made.

With that in mind, it seems useful to have a look at the development of the Astros teams of recent times.  Now please note that these are projections from the outset of each season, not the actual results posted by each player.  The projections, in this case, are also boiled down to the ubiquitous WAR, which tries to encapsulate a player's value into one number.  This represents a useful summary, but that is about all.  How the projections stack up against the actual performances is an article for another time, and probably a pretty interesting one.  But in this case, lets observe the development of a pretty darn good baseball team via yearly pre-season projections.

This series starts in 2013, when the Astros were still planning on running Brett Wallace out at first.  Bud Norris headed up the rotation, and Lucas Harrell was thought to still be worth a positive WAR.  ZiPS, like the Astros, whiffed on JD Martinez, and Fernando Martinez had been a pretty good prospect a couple of seasons before 2013.  This is what it 2013 was projected to look like, and try not to get nauseated.

In 2014, Dexter Fowler was the interesting acquisition when the Astros traded Jordan Lyles to the Rockies.  Jesse Crain threw no pitches for the Astros in his role as bullpen leader.  Josh Fields had been claimed in the Rule 5 draft, which sort of foreshadowed the Astros penchant for grabbing high velocity, high spin pitchers.

At least in 2014, Jose Altuve was joined by Brad Peacock, meaning that there are two 2019 Astros who were on the projected big league club 5 years ago.

In 2015, George Springer and Collin McHugh joined Bradley J and Jose Altuve in the projected team.  ZiPS was pretty bullish on Springer, especially given his difficulties with contact in the high minors and in retrospect, it was right to be.  McHugh had joined the Astros the year before, and he had pitched much better than anyone thought possible.  Dallas Keuchel's projected WAR also jumped because of his 2014 breakout.  And the Astros spent some money in the 'pen, signing Chad Qualls, Luke Gregerson, Pat Neshek to contracts between 1 and 3 years, after having added Tony Sipp early in the 2014 season.

And in 2016, the current-day Astros continues to take shape.  Handsome Jake, LMcC Jr and Carlos Correa were projected to seize playing time, and Max Stassi was projected to take on some backup duties. Will Harris is the other current Astro projected for significant playing time here.  Harris has been quitely excellent since the Astros claimed him after the 2014 season

I don't think Jon Singleton ever took the field for the Astros in 2016.  This team was seriously short of a couple of power bats, and Carlos Gómez's continued suck-a-tude didn't help either.

I don't remember the 2017 season that well.  It was lost in a 4 month hangover from excessive drinking that started around early November for some reason....  Yes, everyone this was a championship winning team, and the bones of today's team were pretty much all there... at least in terms of position players.  Alex Bregman became an overnight superstar at third base, Josh Reddick signed a 4-year contract (which the Astros now probably regret a tad) and Yuli Gurriel took over first base duties.  ZiPS really missed on Charles F Morton, who struck out 10 batters per nine while walking three (per nine) en route to a WAR of 3.2.  I will always remember Morton being entirely lost for words in immediately after Game 7.  When they tried to interview him, he was totally overwhelmed.  He was so in the zone for the last four frames of that season that he almost could not speak coherently.  I will really, really miss Morton this year.

This is an impressive team on projection paper.  The worst position player was replacement-level (2 WAR).  The rotation got a lot better when the Astros traded for JV late in August.  The middle infield was projected for 13 WAR, and the up-the-middle four (five, including backup catcher?) were supposed to be worth 20 WAR.  Yikes.

In many ways, this team was probably better than the 2017 team via projections.  Sure, the up the middle guys had dropped to a projected 19 WAR (still yikes!!) but the rotation and bullpen was projected to be much better, and none of the position players were forecast for a regression. The reality was different - Reddick, González, Correa, Altuve and McCann all didn't match their 2017 production, or their projections.  Devo scuffled a bit in the 'pen, as did Joe Smith for periods of time.  Ken Giles disappeared.  The Astros may as well have hit a pitcher instead of a DH because of continued weakness at that position.  In retrospect, the rotation was clearly the strength of this team.

And, you may remember, the Astros got bounced in the ALCS by a streaking Red Sox with an assist to an incompetent umpiring crew.  To think that Joe West chesting the ball back into the infield after an errant throw to second was not the stupidest umpiring moment of the ALCS.  Hell, it isn't even in the top 3...

So that brings us to the 2019 projections, which are in the diagram below.  Unusually for this series, Dan Szymborski has changed things up a little.  Firstly, Dallas Keuchel has been removed from the Astros rotation - normally they list an unsigned free agent with the team that they are exiting until they are signed.  Secondly, he seems to have bent over backwards to allocate playing time to Handsome Jake and Tony Kemp, creating a super-platoon or sorts in the outfield and at DH.  I am ignoring the other obvious changes (the font! the decimal points!), but it is clear that this a bit of time has been spent carefully projecting the Astros by the FanGraphs crew.

So what do we have??  We have more conservative predictions for the middle infield, which isn't surprising given the injuries in 2018 that Correa and Altuve struggled with.  We have continued regression from Yuli Gurriel.  We have a really good bullpen (Szymborski makes note of this in the article).  We have a less consistently good rotation, but an encouraging projection for Josh James.  This is still a team without an obvious weak point, and I really doubt that Yuli Gurriel will be handed the first-base job if he looks like he is scuffling for a 0.8 WAR mid-season.  There are a number of candidates to send him to the bench if he continues to regress.

Brian recently wrote about Wade Miley, and I think he was bang on in his prediction.  The Astros covered off the fifth slot in the rotation with a durable arm on the cheap.  He thought that that meant they are confident that the pitching prospects in the organisation can form the basis of a rotation on an ongoing basis.  Verlander, Cole and McHugh are all off-contract this year, so this is a time of likely significant roster-churn for the rotation.  I can see Josh James, Cionel Perez and Framber Valdez getting extended looks this year, with a sprinkling of Rogelio Armenteros and Forrest Whitley in there as well.  Corbin Martin, JB Bukauskas, Akeem Bostick and Dean Deetz are all still in the org, and they will be trying to prove themselves in the upper minors.

So I think that the Astros are gambling on some strong offensive seasons from some established major-league hitters to carry the team, while they try and develop the rotation into something that can compete in 2020.  It will be a pretty neat trick - they lost Morton and Keuchel from their 2017 championship rotation this offseason, and are due to lose Verlander this coming offseason (and Cole and McHugh of course), so that makes 5 above-average to excellent starting pitchers exiting the system in a really short period of time.  2020 may see Forrest Whitley, Josh James, Lance McCullers, Framber Valdez and, say, Rogelio Armenteros starting.  If this were to work out, that would be the core of a cheap and possibly excellent rotation for a number of years, and this would extend the shelf-life of the Astros considerably.  This is how dynasties are built.

Lastly, please note that ZiPS is high on Kyle Tucker, who does not appear on this depth chart.  He is forecast for a 3.1 WAR, including an OPS+ of 121 and a Shawn Green comparison.  Myles Straw also gets some love despite a noodle bat (78 OPS+) with a defense-heavy 1.9 WAR.  A couple of role players like this are bound to get some looks, and may make a real difference in the event that things get tight in the division. 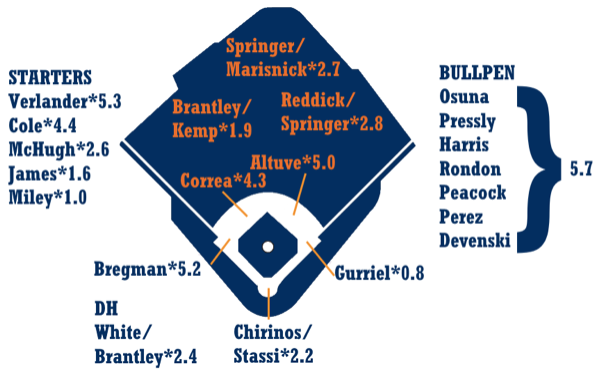 Hope you enjoyed this.  Thanks for reading.
Posted by Masked Marvel