Our long time readers will remember that we've put together our own season projections every season since 2012 (except 2013, when the team briefly made me lose my will to live). It's that time again, and this year I decided to give it a catchy name, complete with random capitalization changes, just like wRC, ZiPS, and other fun baseball acronyms. The Astros County annual projections are henceforth known as LEMoNGELLO, or Latest Extrapolated Mishmash of Numbers Guessing Everyone's Likely Latent Outcome. Rolls right off the tongue, right?

The same general disclaimer still applies: Anytime we put together projections the goal isn't to be perfect. While we're looking for a likely outcome for each individual player, the goal is more to get an idea of the team as a whole. Some players will have career years, while others will get injured or collapse unexpectedly. If I could predict those things, I'd be in a front office somewhere. We're just trying to get a reasonable baseline of expectations for the team.

Last year, I didn't see the offense becoming a GOAT. Gurriel and Bregman really stepped up in their first full seasons. Altuve proved that his new power wasn't a fluke. Springer took his game to another level. And if anyone told you they saw Marwin's season coming you should throw them in the water to see if they float.

On the other side, the pitching staff really struggled with injuries. Keuchel was penciled in for 200 innings and McHugh with 185. Thankfully guys like Peacock stepped in to keep things from going off the rails.

There are a couple questions coming into this year. First, can the pitching staff return to health. Verlander has been a workhorse most of his career, but no one else on the staff has a great track record concerning durability. Second, how much will the offense come back down to Earth, if at all. With the relative youth of their core, the Astros may not see as much regression as one would usually expect.

So, how does this season shape up? 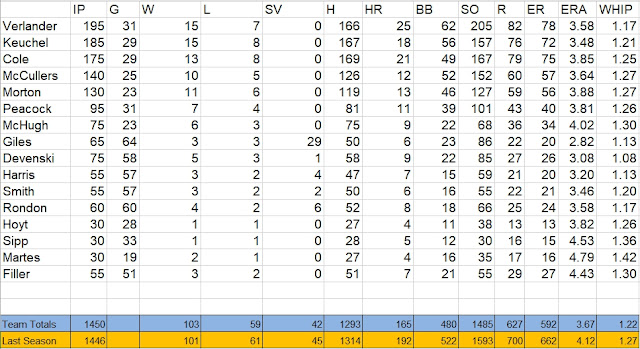 As usual, there is some rounding, so individual totals may not quite add up.

It's hard to see anything but success given that the team is returning the core of last year's Championship squad, plus a full year of Verlander and the addition of Cole.
Posted by The Batguy