What "Earn History" Means to Me

The Astros slogan of "Earn History" sounded like just another cliche sports hashtag when I first heard it. Yeah, winning the World Series means it's the first in Astros history, the first in Texas history, etc. That's great, but every team has a cute slogan, right? But as I pondered the depths of my soul following the most amazing routine grounder the second ever, I realized there was more to Earn History. Maybe it also means that this club has finally earned our history. The history of every fan who has waited for this moment. Every fan who grew up cheering for the orange and blue (and brick red) (and navy and gold). Every fan who inherited their loyalty to the Astros from our fathers and mothers, aunts and uncles, grandparents. The history that includes the heartbreaks of the past, the expectations never fulfilled, the Hall of Famers who, through all of their individual greatness, could never bring home that ultimate team accomplishment.

For me, that history starts with my grandfather. "Big Lou" was a giant of a man, at least to the child version of me. He was a landscape architect who did quite well for himself during Houston's booming growth of the late 70s to early 80s. He lived on a golf course and was a member of a country club, where he made the kind of connections that got him a prime spot as an extra in Bad News Bears Breaking Training. Here you can see my grandparents joining in the "LET THEM PLAY" chant. 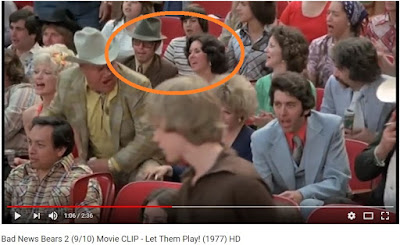 Sadly, Big Lou passed away before I really got to know him. But one of the things I got from him was his ticket from Opening Day, 1962. It is one of my most prized possessions. 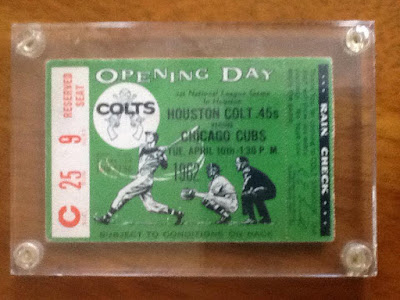 I discovered baseball during the 1986 season. I was 7 years old and all I knew was that Mike Scott was the greatest pitcher who ever lived. The excitement of that season led me to start playing Little League the next summer and introduced me to the wonders of baseball cards. By that time, my family had moved from Houston to Memphis. In the pre-internet days, getting information about an out-of-town team was tough. I scoured box scores, recreating the action in my mind as I read down the lineups and pitching lines. My favorite days were when something exciting enough happened that Houston got a two paragraph blurb by an anonymous AP writer. I also turned to my baseball cards, quickly flipping through the opened packs to see if I had found the Jim Pankovits, Danny Darwin, or Dave Rohde card that would complete my team set. Flipping to the back I discovered stats! I spent untold hours sorting players into lineups. Players with lots of steals hit 1st and 2nd. Doubles hitters were 3rd. Homers got you into the cleanup spot. RBIs slotted into 5th. Triples hitters batted 6th. The 7th and 8th place hitters were determined by batting average. And, of course, the pitcher batted 9th. The Astros were, of course, a National League team.

I got an Astros pennant to hang on my wall. My dad got a snapback hat with a mesh back and a batting practice jersey. The pennant is long gone, but I now have that hat and jersey.

On the ball field I was a pitcher. Most of my teammates were Cardinals fans, but not me. My family was from Texas. We were Astros Fans. My delivery was a mimic of Nolan Ryan's. Arms over the head from the windup, high leg kick for extra oomph on the fastball. My step-dad was my coach, my batting practice pitcher, my bullpen catcher.

Around this time, the old USA Today publication Baseball Weekly started coming out. I got a subscription for Christmas. Now I could read about my Astros every week! And even more stats!! For this era it was Bagwell and Biggio, Kile and Drabek.

Then, like most kids with lofty dreams of superstardom, my baseball career came to an end in high school and other interests took precedence. I soon graduated, started a family, and moved to South Carolina. The Astros were no longer an everyday thought. I checked in on them from time to time, though. It was cool when they did well, but, again, this was before the internet could be carried around in your pocket. I was in the wilderness.

Then, in 2004 and 2005, the Astros burst back onto the scene and into my consciousness. The Killer B's. Clemens and Pettitte. Oswalt and Lidge. And, what's this? Randy Johnson and Carlos Beltran?! WE'RE GOING TO THE WORLD SERIES!!! I was working 12 hour night shifts at the local golf ball factory while going back to school during the day to get my degree. I had a 2 year old and a 3 year old. Every single game fell on a night I was scheduled to work. I missed every game and the Astros, now once more My Astros, were swept.

I was in danger of wandering back into the wilderness.

But now...there was the internet. Now all the Astros information I wanted was available 24/7. OMG, ADVANCED STATS!!!! And the birth of blogging. The birth of Astros County. Back then, James was going it alone. There was no SB Nation or Fansided. This was just a dude talking about my team.

And I joined twitter. Astros County was the 4th account I followed, right after Tags and Justice and Footer. After a while James tweeted that he wanted some help. I volunteered and started writing daily recaps of the minor league games. That's where I learned about guys like Altuve and Keuchel. JD Martinez and Jordan Lyles. Telvin Nash and Jason Chowning and Jordan Scott. Things were so bad back then, and these kids were all the hope we had.

My reentry into Fanatical Astros Fandom led to the creation of the How Many Altuves website, which led to so many amazing opportunities. I got to go to a couple of games at Minute Maid Park, meet Jose Altuve, and take in an inning next to Jeff Luhnow in his suite. I told Jeff that I wasn't too sure about this Villar kid that had just come up, that he seemed inconsistent and like a bit of a hot head (he had broken his hand punching a door the prior year.) Jeff thought he played with passion and had a great future with the Astros. Guess we both missed the mark on that one.

A couple years later I made the 16 hour drive up to Cooperstown to see the first ever player get inducted with an Astros cap. I cried when the parade crowd chanted B-G-O, B-G-O, B-G-O as he rode by. I made the trip again for Bagwell's weekend (this time I flew) and had a chance to meet so many people connected to the organization.

So, that's my story. My history.

Or, it was, until last night.

Not only did the Astros earn their own history last night, but they also earned my history, and the history of all of you, and of so many others who have come before us.

For the first time ever, THE ASTROS ARE WORLD SERIES CHAMPIONS!!!!!!
Posted by The Batguy