*The Astros will each receive about $438,000 for winning the World Series - an MLB record.

*SportsTalk 790 will re-broadcast Games 5 and 7 starting at 6am tomorrow.

OaklandClubhouse says of Bailey:
Bailey has swing-and-miss stuff dating back to college and he has a starter's repertoire. He has a four-seam fastball, a four-seam changeup, a spike curveball and a slider. Bailey was also working on a cut-fastball late last season.

The Astros added Cionel Perez and Dean Deetz to the 40-Man roster, which is now full.

*Y'all know I pimped the mess out of some t-shirts that I had a hand in helping design. Starting tomorrow (Thursday) through Monday, BreakingT is offering a Black Friday sale in which you get:
-25% off the entire store
-Free shipping at $50

So click this link and check out the Houston collection. Get your friends and family some *actually affordable* shirts you can't get at Academy. 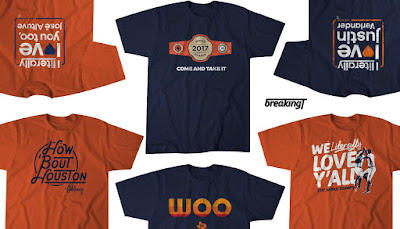 *ESPN will show the Astros' season opener at Arlington at 2:30pm on Thursday, March 29 as well as the Astros' home opener against Baltimore on Monday, April 2.

*Mark Appel was designated for assignment by the Phillies.

*So I guess Kevin Comer was signed by the Tigers.

*The Braves got absolutely hammered.

*SportsNet's Jeff Blair might *only* vote for Bonds and Clemens this year.

*Meet the guy who built a homemade rocket. To launch himself into space. To prove that Earth is flat. The big yellow "RESEARCH" tag below the cockpit lets you know he's for real.
Posted by Astros County