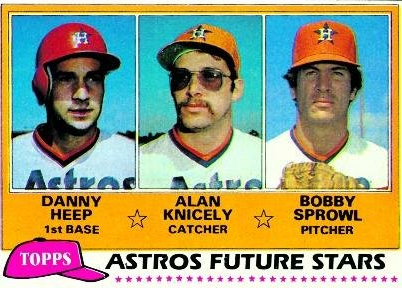 And if you'll walk this way you will see a real treasure. A gorgeous piece of American Folk Art. Indulge me for a second...

As an aside, Heep's lone walk for the '79 Astros came in a crucial series against the Reds, with whom the Astros were locked in a tight division race. Tied 2-2 in the bottom of the 13th, with runners on 1st and 2nd, Heep pinch-hit for closer Joe Sambito. Reds pitcher Tom Hume intentionally walked Heep to face catcher Bruce Bochy. Bochy hit a one-out single to left to score Craig Reynolds and win the game, cutting the Reds' NL West lead to 1.5 games. Houston would go 4-5 down the stretch, the Reds went 3-4, but the Astros couldn't catch Cincinnati.

1980 saw Heep at Triple-A Tucson. In 96 games he hit .343/.398/.570 with 36K:36BB. When Art Howe got hit in the face with a pitch at Montreal, Heep was called up to play a sporadic first base. Over 33 games (97 PAs) Heep hit .276/.340/.368 with 9K:8BB to go with eight doubles and 6RBI. Heep went 3x3 with a walk and an RBI in the front-end of a double header against Montreal on July 19 and added three more hits at Montreal on July 25 and 26. Heep had another great day on August 17 at San Diego, going 3x5 with two doubles and an RBI and starting a season-high five-game hit streak. The 1980 Astros went 93-70, winning the NL West and of course losing a heart-breaking NLCS to the Phillies. Heep's lone NLCS action game in the bottom of the 10th in the deciding Game 5, pinch-hitting for RF Gary Woods. He popped out to short to lead off the inning.

Heep's minor-league numbers got him included on the above baseball card.

We all know how the 1986 NLCS went, but Heep went 1x4 with a sac fly and an RBI in a pinch-hitting role.

In 1980 Knicely spent the season at Triple-A Tucson where he hit .318/.396/.515 - 18 doubles and 22 homers with 76K:61BB. He spent 124 games behind the plate where he committed 23 errors and allowed 16 passed balls. With catchers Alan Ashby and Luis Pujols faring better defensively at catcher, Knicely needed to find another position. He was 0x1 with a strikeout for Houston in 1980.

Still, the 55 homers in two seasons got him a spot on a baseball card.

Again Knicely spent 1981 in Tucson, hitting .306/.393/.502 with 73K:73BB and 32 doubles to go with 18 homers. He spent three games in Houston in 1981, getting a memorable seven plate appearances. Nicely got a single in his ML debut, pinch-hitting for Terry Puhl in the 9th inning of an eventual 9-0 Houston win on September 17. On October 3 at Chavez Ravine, Knicely hit a homer off Bob Welch in his 2nd career ML plate appearance, getting the Astros on the board in what would be a 7-2 Astros loss. The next day Knicely got his first ML start, hitting 5th and playing catcher. He went 2x4 with an 8th inning homer off Dave Goltz in the 8th to tie the game in an eventual 5-3 Astros win.

Bobby Sprowl, a left-handed pitcher out of the University of Alabama, was drafted by the Boston Red Sox in the 2nd Round of the 1977 draft - after Kevin Bass (Brewers) but before Mookie Wilson (Mets) in the round. In his senior season at Alabama Sprowl led the nation in K/9 with 115 strikeouts in 92 innings.

Sprowl soured Red Sox fans with his start on September 10, 1978, the second game after manager Don Zimmer called him up from Triple-A Pawtucket. Remember that the Yankees were 14.5 GB of Boston in July 1978. In the 4th game of a September series against the Yankees, Zimmer tabbed Sprowl for the start over Bill "Spaceman" Lee (who was 10-10 with a 3.50 ERA, though 44K:57BB to that point in the season) . It was Sprowl's - who was drafted 15 months earlier - second career Major-League start. Sprowl didn't get three outs. He threw 0.2IP, 1H/3ER, 0K:4BB in a game that allowed the Yankees to tie the Red Sox for the AL East lead. The Yankees would win the division on Bucky Dent's 7th-inning, 3-run go-ahead homer in G163. Sprowl - according to the aforementioned-link - would take on Bill Buckner-level scapegoating for that start.

Sprowl spent his entire 1981 season in Houston - 28.2IP. He was 0-1 with a 5.97 ERA and 1.88 WHIP. His first three appearances of 1981 went okay: 3IP, 3H/0ER, 5K:1BB. He allowed 3ER in consecutive road appearances at Chicago and Cincinnati. Sprowl got his first Astros start against St. Louis on May 14, when he allowed 4H/1R (0ER), 3K:2BB in a game the Astros would somehow lose 7-6. Five days later he'd allow 4H/3ER in 2IP against the same Cardinals. He would five up at least one earned run in six of his next eight Astros appearances, bouncing between Tucson and Houston.

Following the 1983 season the Astros traded Sprowl to Baltimore for Craig Minetto, who never pitched for the Astros. Sprowl is currently the head coach of the Shelton State Community College baseball team in his hometown of Tuscaloosa, Alabama.
Posted by Astros County