I threw a poll question on Twitter shortly before beginning to write this article:


Working on a trade article for @AstrosCounty.

What is the Astros biggest area of weakness?
— Timothy De Block (@TimothyDeBlock) July 17, 2016


Here are the early results as I begin writing this article: 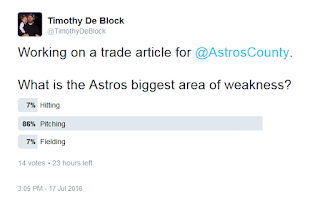 I think the early struggles play into these early results. I mean the Astros have a guy snubbed from the All-Star team, an MVP candidate, and a potential future hall of famer. The offense is fine right? Well until you see that Marwin Gonzalez is batting second. Don't get me wrong, I love me some Gonzalez. He's a good utility player with solid defense and a knack for getting clutch hits. The problem is that he owns an 87 wRC+ (100 is average). That's 8th on the team for guys with at least 40 plate appearances (PA).

The Astros biggest needs are in fact the offense. That doesn't preclude them from upgrading the pitching for a playoff run. Lets dive in.

*All stats prior to Sunday's game and from FanGraphs.

I will be using wRC+ extensively.

Depending on your stat of choice, the Astros are in the middle of the league offensively. Their wOBA, wRC+, and WAR land between 13th and 16th in the league. Going a little deeper we see four players with wRC+ well above 100. Jose Altuve (151) leads the team. George Springer (123) and Carlos Correa (121) are next. Then Luis Valbuena (118). Yes, Valbuena. He's been hot lately.

Taking batting average on balls in play (BABIP) into account, White, Gattis, Reed, Tucker, and Marisnick all are expected to improve given more playing time. We've seen some of that from Gattis recently. White and Tucker aren't on the team and Marisnick is a reserve. Reed it's a question on how quickly he can adjust to major league pitching. Which might not be this year considering his rookie status. Overall the team sits at .296. Which is only slightly below average.

*Danny Worth is at 22 wRC+ for those wondering.

This is probably why the Astros signed Yulieski Gurriel to a five year $47.5m contract despite having a similar player in Alex Bregman ready for a call up. The Astros can move Valbuena to first where the Astros have had little to no production. Then plug in Gurriel and Bregman at third and left field. Those moves are likely to occur in August and September. Can the Astros wait that long and hope the pitching carries the team until then? The non-waiver deadline is August 1 (two weeks).

*I will be using WAR extenstively.

The Astros could use another starter to strengthen the rotation. They have options in the bullpen. Both Chris Devenski and Michael Feliz came up through the minors as starters. Scott Feldman also seems to be pitching much better. The bullpen could us another lefty and I would expect the Astros to try and add one at some point before September.

I will spare you the individual breakdown of each player on defense. Defense is a tricky thing to measure and the stats available need a large sample size (three years) to truly tell us something about a player. Overall the Astros are again top 10 in the two main advanced defensive metrics DRS (3rd) and UZR (9th).

Moving Valbuena to first base would benefit the Astros defensively. Valbuena's numbers are not glowing at third base. In the sample we have, he appears to be much better at first base. Correa's defense is below average, but so was Altuve's when he broke into the league. Altuve is above average this year. In the outfield Springer and Rasmus are really good. Gomez has been good and bad depending on your metric of choice.

I doubt the Astros improve this team based on defense. It will potentially improve with a Gurriel or Bregman call up and a Valbuena move to first. In the outfield the Astros are probably willing to give up a little of defense to improve the offense.

Checking in on the poll results so far it appears that hitting has gained some ground. Pitching still leads. 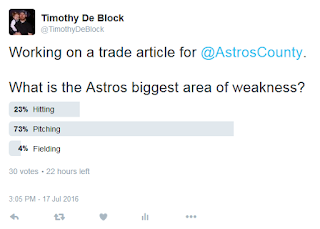 It would be beneficial for the Astros to improve the offense. They may have already done that with the Gurriel signing. Bregman is ready for a call up. The only issue is that both players are untested at the major league level.

It would also be beneficial (but less necessary) for the Astros to add another top of the rotation starter to the mix. They have three solid starters at the top and Fister who is a nice story. Someone like the rumored-available Chris Archer would be a nice fit. For the bullpen a lefty.

The pitching and defense has been a strength for this team so far. The offense is not terrible but could use a boost.