From the Office of the County Clerk: G22 - Astros in Seattle

The worse the Astros play, the more you get to read / listen to on Astros County, it seems.  The plethora of articles posted recently about the Astros' poor play (all AC links) should all be read in ernest by anyone interested, as the writers here vent their collective spleens at the Astros.  The first two games of the Mariners series, plus the two series' prior to that have been about as frustrating as it gets for a team with high expectations at the beginning of the year.  Much of it has been self-inflicted too - at least in terms of the situational hitting and defense - and the pitchers have simply not been executing.

But things have taken an upturn!!  To quote ESPN: 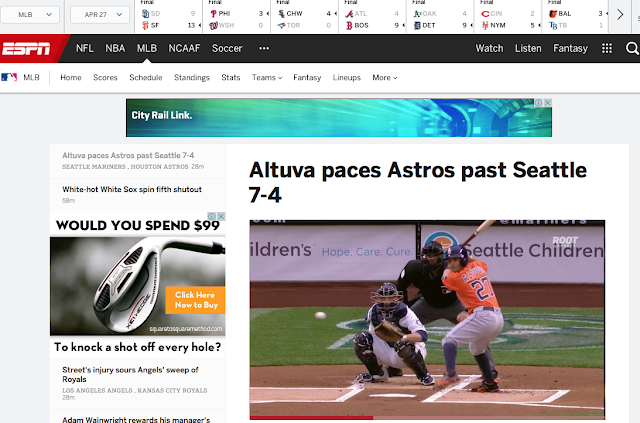 So José Altuva (gosh, he looks kind of short) had a great night, Collin McHugh pitched solidly for five innings, the Astros had an inning where they scored runs after putting runners in scoring position while not hitting home runs, and the bullpen worked around some runners while preserving the lead.  That resulted in a 7-4 win, and the Astros head into the badly-timed day off with a little bit of momentum.

On the Mound:
McHugh took the mound in the first with a 1-0 lead, which lasted exactly two batters.  After getting a line-out and a grounder to open the frame, Robinson Canó - who has killed the Astros this series - hit a home run to RF.  The pitch was a 1-2 curveball that was meant to be a back-door strike, but McHugh missed glove-side, and it had a bit of a cement-mixer movement to it.  Anyhow, the pitch rolled in there and caught too much of the plate, and Canó hit a drive that got just out over the RF fence.

McHugh worked around a one-out Seager double in the second frame - a fly ball to LF that Rasmus mis-played going back on the ball, really  should have been an error.  A grounder and a strikeout (of backup catcher, Steve Clevenger) did not allow him to advance, so a scoreless frame was logged.  A two-out double in the third (Seth Smith hit a hard drive over Gómez's head in CF) put a runner on second, then Robinson Canó drove Smith in with a single - a bit of a jam-shot / soft liner that blooped over shortstop, into shallow CF.  Nelson Cruz struck out on a full-count called fastball to end the frame.

McHugh retired the side in the fourth facing the minimum despite a one-out walk.  He only needed nine pitches for that frame.  In the fifth, McHugh was in possession of an expanded lead (5-2) and he allowed only a two-out single to CF in that frame.  However, McHugh was sitting at 101 pitches, facing the heart of the order for the sixth, so Hinch opted to go with Tony Sipp.  Sipp retired Canó and Cruz, but Adam Lind took a high fastball deep for a two-out solo shot.  Castro was asking for a fastball away, but Sipp missed arm-side and up, and the pitch ended up being a fat fastball on the inner third.  Lind hammered it 25 rows back into over the RF power alley for a no-doubt solo shot.

Sipp followed by hitting Kyle Seager with the next pitch - a fastball a little inside, not too far from the plate which Seager turned in to.  Will Harris was summoned from the 'pen to clean the inning up.  After allowing an infield single on a chopper down the line that Valbuena did about as well as could be expected with, Harris struck out Steve Clevenger for the third out.

Harris stayed on for the seventh, and he allowed only a Ketel Marte infield single in a scoreless frame.  The single was to Correa, and he also did about as well trying to make the play as he could - Marte just beat it out.  Ken Giles was in trouble in the eighth for a while - he walked Nelson Cruz as the leadoff hitter, then Adam Lind singled to LF against the shift, sending Cruz to second with no outs.  But two strikeouts and a groundout (which Valbeuna nearly muffed because the ball got stuck in his glove) meant that neither runner scored.  Luke Gregerson was also in a little trouble - he also walked the leadoff man, then allowed a single with no others.  But two grounders (one of which was a swinging bunt that advanced the runners) and a strikeout ended the frame with only the leadoff runner scoring, so Gregerson had an earned run added to his ledger in a non-save situation.

McHugh's final line was middling: 5IP, 5H, 2R/ER, BB, 3K, but he had his high, riding fastball working well, and he mixed in a cutter and a curveball frequently.  I think it is the best he has looked in a while.  A couple of the hits were cheap and / or errors, as well.  Sipp and Gregerson allowed earned runs, Harris and Giles didn't despite allowing a couple of baserunners each.  Harris went one-and-one-third in continued excellent relief work, allowing only a couple of singles on choppers to the left side.

At the Plate:
José Altuve led off the game with a home run - of course he did! - while continuing his early-season awesomeness.  He finished the night with a .330/.422/.659 triple-slash, which speaks to how very good he is.  The home run pitch was a 2-0 fastball down and on the inner third, and Altuve drove it over the bullpen in LF, estimated at 375 feet.

That was all the action until the top of the third, when Jason Castro hit a one-out double to LF.  José Altuve followed with another double, plating Castro for his second RBI of the night.  Altuve's double was on a good pitch - a 2-1 sinker down-and-in, and barely catching the strike zone.  The result was a hard grounder that eluded a diving Kyle Seager, and rebounded into play off the LF grandstand.  George Springer then singled to LF (through the 5.5 hole, sending Altuve to third) before Carlos Correa hit a clean line-drive single to shallow RF, scoring Altuve.  But that was all for the inning, as Rasmus popped out and Gattis struck out to end the frame.

Carlos Gómez was hit by a pitch to open the fourth - a pity because I have seen some good at-bats from him, including some at-bats when he fouled off a bunch, and some 400-foot fly-outs.  He was stuck on the under-side of his right hand, which is probably less important in terms of power and recovery, unless a bone was broken.  Gómez (0-1, HBP) was replaced with Preston Tucker (with Rasmus moving to CF), but González (0-4, 2K) GIDP'd and Valbuena (0-4, 2K) struck out swinging to end the frame.

More runs in the fifth.  Jason Castro, who the Lima Time Time Podcast has been hatin' on (but who has had three decent nights in a row at the plate) walked to lead off the frame.  José Altuve (3-5, HR, 2x2B) followed with another double to LF (a line drive over Seager, the third baseman), sending Castro (1-3, 2B, BB) to third.  After a Springer strikeout and a Correa walk,  Colby Rasmus singled just over Canó's head to drive in Castro, then Gattis hit a sac-fly to CF to drive in Altuve.  Preston Tucker struck out to end the frame.

The Astros went in order in the sixth, then loaded the bases with one out (via a Springer single, a Correa reached-on-error and a Rasmus full-count walk) in the seventh.  Then - a hit!! - Evan Gattis (1-3, 2B, SF) mashed a long line-drive double (on an elevated fastball - his specialty) to CF, which hit the wall about 2 feet below the yellow line.  Springer (2-5) and Correa (1-4, BB) scored easily, the relay throw was behind Colby Rasmus (1-3, BB) into third base, then he was trapped in a run down between third and home for the second out of the inning (interestingly, he was called out for leaving the baseline, which Hinch argued).  Preston Tucker (0-2) struck out to end the frame with Gattis on second.

And that was all the Astros baserunners for the evening, with four strikeouts punctuating the eighth and ninth innings.  But the damage had been done, the Astros actually scored some runs when they loaded the bases for the first time in a while.  Some guys with slow starts also looked a little like breaking out, so perhaps there is hope after all.

Turning Point:
... hopefully of the season.  Evan Gattis' deep drive to CF with the bases loaded scored Springer and Correa easily.  Who cares that Colby Rasmus TOOTBLAN'd for the second out, Gattis sealed the game with a 2RBI drive, and the Astros took a lead that they wouldn't relinquish.

Goat(s) of the Game:
6-7-8 hitters (Gómez / Tucker, González and Valbeuna) combined for an 0-11 night with 7 strikeouts. Still massive black holes in the order.  The top 4 hitters (Altuve, Springer, Correa and Rasmus) have actually been pretty consistently solid.

Then: Astros at Athletics.