From the Office of the County Clerk - G75: Astros versus Yankees

Apologies, loyal readers, for missing the recap of Game 74 - the rubber match between the Astros and the Angels.  It was a peach, with extra-innings baseball, with the Astros eventually going down on a bloop single over the head of Chris Carter.  Chad Qualls was the pitcher.  The Astros TOOTBLAN'd themselves out of multiple scoring opportunities earlier, with three important outs recorded on the bases via a pickoff, a caught stealing and a runner thrown out trying to stretch a single into a double.  Add Lance McCullers' strong but wild starting display, and the Astros being shut down by another lefty starter - in his Major League debut - and the Astros lost the series in frustrating fashion.  But they still recorded a 4-4 road trip, which is something, and they remain atop the AL West by multiple games.

The first game against the Yankees was aaaallllllllll Keuchel in a 4-0 win.  The Astros eeked out some runs - enough to allow Kuechel to finish the game with the bases loaded, anyhow, resulting in a complete game win.  Details below....

On the Mound:
Dallas Keuchel has been a good pitcher for quite a while now, but only when he starts against the Yankees does he get some national attention.  (Please look at the first link - over the word "some" - to find an embedded tweet from the Constable, who took a break from his vacation to tweet out a funny).  He was fabulous tonight - on the night of the introduction of Keuchel's Korner, too - throwing a nine-inning complete game, allowing only six hits, walking one, while striking out 12.  He allowed 10 ground balls versus 5 fly balls, and threw 116 pitches, 79 for strikes.

Keuchel allowed a single to the first batter of the game, then struck out the side in order to end the first.  He allowed a two out single in the second, but the hit was of the infield single variety, and it was sandwiched around two strikeouts.  A double play after a one-out single ended the third frame.  Another two-out infield single to ex-Stro Carlos Beltrán was the only blemish in the fourth.  The side went in order in the fifth, including a strikeout of old friend and ex-Stro Gregorio Petit, and Keuchel struck out the side in the sixth.  The side went in order on a ruthlessly efficient six pitches in the seventh, and Keuchel required 10 pitches to set the side down in order in the eighth.

The only drama of the night - and by drama, I mean a runner at or past second base - was in the ninth.  Keuchel retired the first two hitters without incident, then he allowed a single to recent 3,000 hit-club inductee Alex Rodriguez, a four pitch walk to Mark Texeira and a 3-1 single to Carlos Beltrán to load the bases.  A grounder to third off the bat of left fielder Jose Pirela ended the game without further incident... or drama.

Multiple comments were published about Joe West's strike zone.  Multiple Yankees turned to talk to Cowboy Joe West after at-bats, and Mark Texeira in particular seemed to be embittered by some of the calls against him.  Here, in the Astros County offices, we like to take an objective look at the strike zones.  From the fabulous brooksbaseball.net: 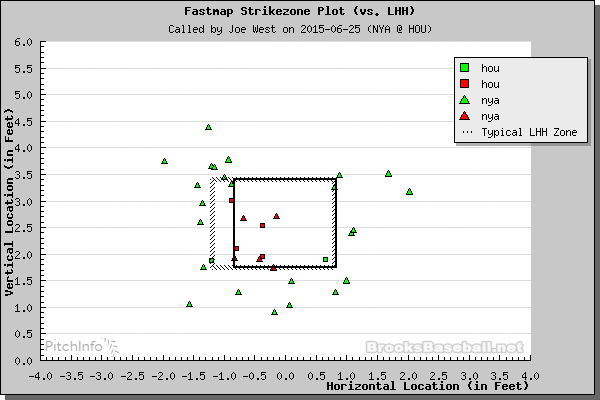 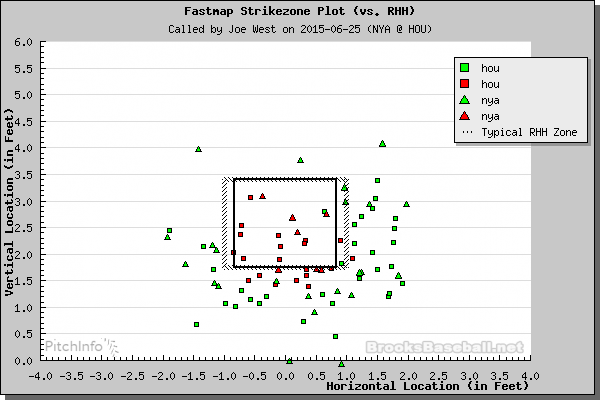 Firstly a quick reminder.  The top graph is the called strikes from all pitchers against left-handed hitters, and the bottom graph is called strikes against right-handed hitters.  The squares are pitches thrown by Keuchel (and all the other Houston pitchers that threw in this game, which is nobody), while the triangles are pitches thrown by Yankees.  The graphs are from the catcher's perspective (i.e. looking out toward the mound).

With righties, it could be observed that Keuchel clearly got the benefit from a number of called pitches down... but in that same zone, the Yankees only managed to place one pitch there (remember, these are called strikes only).  Kuechel was hosed on one pitch up and away, but got the benefit of another couple of pitches down and away.  Again, the Yankees weren't able to hit that zone.

I will let the handsome, observant and intelligent readers make up their own minds.  Feel free to comment below, but this looks a little like sour grapes to me.  The strike zones look pretty consistent.  Plus, I kind of feel that the Astros got a little hosed on their road trip with the umpires, and this may represent some kind of karmic return.  Not that karma should detract from Keuchel's performance at all.

At the Plate:
George Springer returned to the lineup, batting leadoff in front of Carlos Correa and Jose Altuve.  Those three went in order in the first.  In the second, Luis Valbuena just missed a home run, pulling it feet foul of the RF foul pole, before being hit by an Adam Warren pitch and taking first.  Valbuena was erased on a fielder's choice, but Colby Rasmus got to take his place, and he scored when the old Preston Tucker (i.e. not the slumping guy) hit a line drive down the LF line on a fastball away.  The outfield was shifted toward the right, the ball went to the wall, and Rasmus scored all the way from first.

The side went in order in the third before the Astros scored again in the fourth.  Jose Altuve led off with a double into the LF corner, and Luis Valbuena reached on an error which did not advance Jose Altuve.  Altuve did advance on a Gattis fly out, then he scored on a sac fly to medium-depth right field off the bat of Colby Rasmus.  Luis Valbuena got caught in a run-down - not sure what happened there, but he was called out for leaving the baseline for the third out.  Not sure whether he was trying to draw the throw or what, but Altuve was easily safe at home if the throw hadn't been cut.

Preston Tucker walked leading off - but did not advance - in the fifth, and the Astros scratched another run across in the sixth.  After a Correa strikeout, Jose Altuve reached on an infield single to shortstop.  He stole second, then advanced while the throw was being retrieved in CF, but Luis Valbuena struck out for the second out.  With two outs, Evan Gattis hit a single up the middle on a fastball away, off the end of the bat.  Astros 3, Yankees 0.

Springer walked and was caught stealing in the seventh - again, he was called out for leaving the baseline, the second of the game - before the Astros pushed another run across in the eighth.  Jose Altuve doubled to left for the second time in the game - a grounder down the line that Chase Headley knocked into foul territory - then stole third base easily.  Valbuena walked and tried to score when Evan Gattis lined a pitch away down the left field line.  Valbuena was ruled out, but Altuve scored easily - the fourth run of the night for the Astros, and the third time that Altuve had scored in the game.

Turning Point:
Dallas Keuchel struck out the side in the first.  Chris Young - an Astros Killer of yesteryear - singled leading off the game.  Keuchel rebounded to get Chase Headley swinging on a breaking ball inside, A-Rod looking on a fastball down and in, and Sour-Grapes Texeira looking on a cutter inside.  That established Keuchel inside on three of the more potent Yankees hitters, and once Keuchel gets on a roll, he has proven hard to stop.

Man of the Match:
Geez, this is a different side when Altuve is reaching base and stealing bases, and he bounced back well tonight after a few games off to rest his legs (and a slump-y last six weeks).  But the MoTM for tonight clearly goes to Dallas Keuchel, who shut the Yankees down, and gave the bullpen a needed rest.  And now he has a Korner named after him.  Keuchel improved to 7-0 at home.

Up Next:
Second game of the four game set.

8 Eastern, 7 Central.  The Astros will be in orange.
Posted by Masked Marvel