From the Office of the County Clerk - G61: Astros at White Sox

Another loss, running the losing streak to 7 games.  This loss was by a score of 4-1, with all four White Sox runs coming off the bullpen, as Will Harris, Tony Sipp and Pat Neshek added their names to the list of now-struggling relievers.  The Astros scored four runs in the series, but again had enough baserunners to make some noise.

Anyhow - going to try another format tonight, and feedback is welcome.

Happy Vince Velasquez Day!  The Astros righty make his first start above AA, and he equipped himself well, much like Lance McCullers.  Also like Lance McCullers on his debut, he lasted only until the middle innings, needing 89 pitches to get through five frames, mostly because of 4 walks.  He allowed 3 hits, but worked around baserunners well.  He struck out five, and the Velasquez-Castro tandem recorded two caught-stealings - perhaps a sign that he controlled the running game well.

Velasquez's first hitter faced in the Majors was ex-Stro J.B. Shuck, who rudely greeted him with a long double.  However, he was stranded as Velasquez bounced back to record three outs on a pop out, a strike out (of Jose Abreu - his first in the majors) and a ground out.  In the second frame, he walked the first two, but a caught stealing minimised the damage.  In the third, Velasquez worked around a one out single followed by a two out single, striking out Adam LaRoche on a back-foot breaker to retire the side with runners on the corner.  In the fourth, he walked the leadoff hitter, but faced the minimum thanks to a strike-em-out throw-em-out double play to end the frame.  In the fifth - leadoff walk only.

Also going well was George Springer, who went 5-5 (all singles).  The first one was a bit of a cheapie - a pop up down the RF line that dropped just fair.  Tonight improved Springer's triple-slash to .254/.364/.433 - I like the OBP, but his power numbers could do with a boost.  Springer also recorded an outfield assist when he gunned down Adam LaRoche at the plate, and a stolen base.

Chris Carter and Carlos Correa had the other two hits for the Astros.  Carter continued his climb back to respectability with a 1-3, BB night which included a double.  Correa continued to establish his career with a 1-4 night that included a solid double - a line drive to the RF wall which had enough to get out with a little more elevation.  Correa is yet to walk in the major leagues, but he has two extra-base hits already, and he looks pretty good at the plate.  Exciting!

Jason Castro allowed no stolen bases today, and caught three stealing.  One was speedster J.B. Shuck.  The other was Avisail García, non speedster, who was caught twice.  Castro has really improved his defence this year, but any improvements that he has managed at the plate are thus far not turning into improvements in production (.212/.280/.384).

The Texas Rangers and the Los Angles Angels of Anaheim also lost, so the Astros lead in the AL Central remains two and four games respectively.

The 'pen kind of regressed tonight.  Will Harris allowed the tying homer in his one inning of work, Tony Sipp allowed another homer in his one inning of work, and Pat Neshek struggled in 0.2 of an inning, allowing three hits and one walk, including a two-run shot to Jose Abreu.  So the team in the AL with the fewest homers hits three home runs off the bullpen in the AL with the third highest strike out rate and second highest WAR in the league.  Regression is a horrible mistress, and she is outside your house boiling your bunnies right now.

The hit sequencing is really starting to get my goat.  The Astros, in recent years, have never seemed to have good clutch hitting teams, but this is starting to get seriously annoying.  In the first, a single, then a throwing error put runners on the corners, but Evan Gattis grounded it right to the third baseman, and Altuve was toast at the plate.  He may have been too far off third, but the grounder was hit hard to the wrong spot.  In the second, a leadoff double then a wild pitch allowed Chris Carter to get to third with one out.  After a Castro pop up, Marwin González walked - for the SECOND time this year - before Handsome Jake drove Carter in with the second out of the frame.  George Springer singled - runners on the corners again, but Altuve grounded out.  In the third - two groundouts followed by a double and walk, but a K ended the frame.

So if you are counting at home, SEVEN baserunners in three frames, all for one run scored (on a non-hit, as well).  The Astros could have scored multiple runs in the first three innings, perhaps allowing Velasquez to pound the strike zone, and preventing a 'pen meltdown.

The Umpires seemed to have pounded the Astros when they have had the opportunity these last two series'.  This series, Larry Vanover made an awful call on Correa's first ML hit which was overturned on review in, like, 3 seconds.  Last night, George Springer barked at the umpires after he failed to get in done in the ninth - erroneously as it seemed.  So tonight??  Lets look at the strike zone plots: 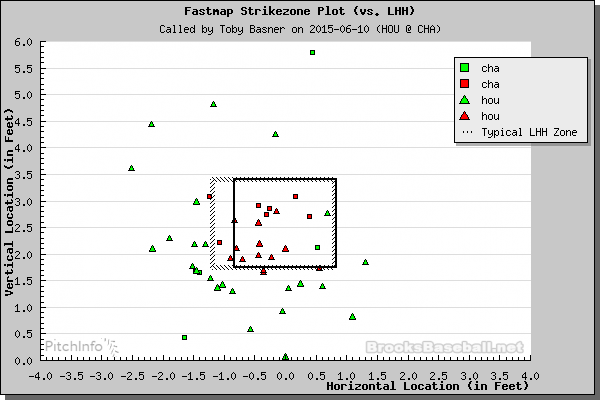 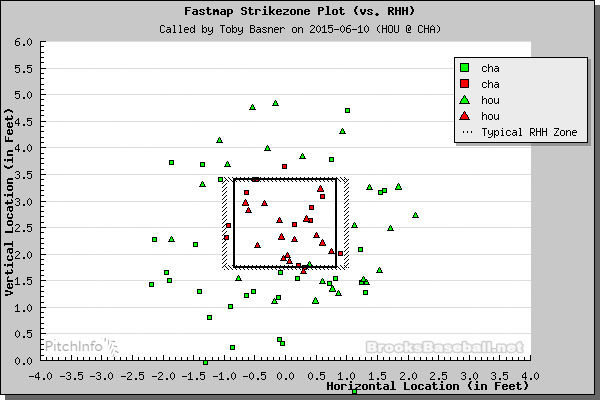 Thanks, umpires.  The Sox (marked by the squares) consistently seemed to get the benefit of the edges of the plates tonight.  Of the nine pitches called that I see were wholly outside the zone, six were called benefitting Sox pitchers.  Of the three missed pitches inside the zone, the Astros were the victims of two of the calls.  Smoking gun?? No.  Irritating?? Yes.  The umpires don't seem to like the Astros at the moment.  Yelling at them may not help.

Up Next:
Day off tomorrow.  Next game is on Friday night at home: