From the Office of the County Clerk - G2: Indians at Astros

Game 2 of this young season represented a reversal of Game 1, with the Indians collecting all of the clutch hits, and managing to pitch out of the occasional jam.  The Tribe hit two solo homers while keeping the Astros scoreless in what was an otherwise well pitched ballgame.  The final result was a 2-0 loss.

Sadly, this loss means that the Astros relinquish their stranglehold at the top of the AL West.  Don't believe me??  Here is a crappy photo taken of my work monitor using a well-out-of-date IE8 that no longer works with the new ESPN website.  To wit: 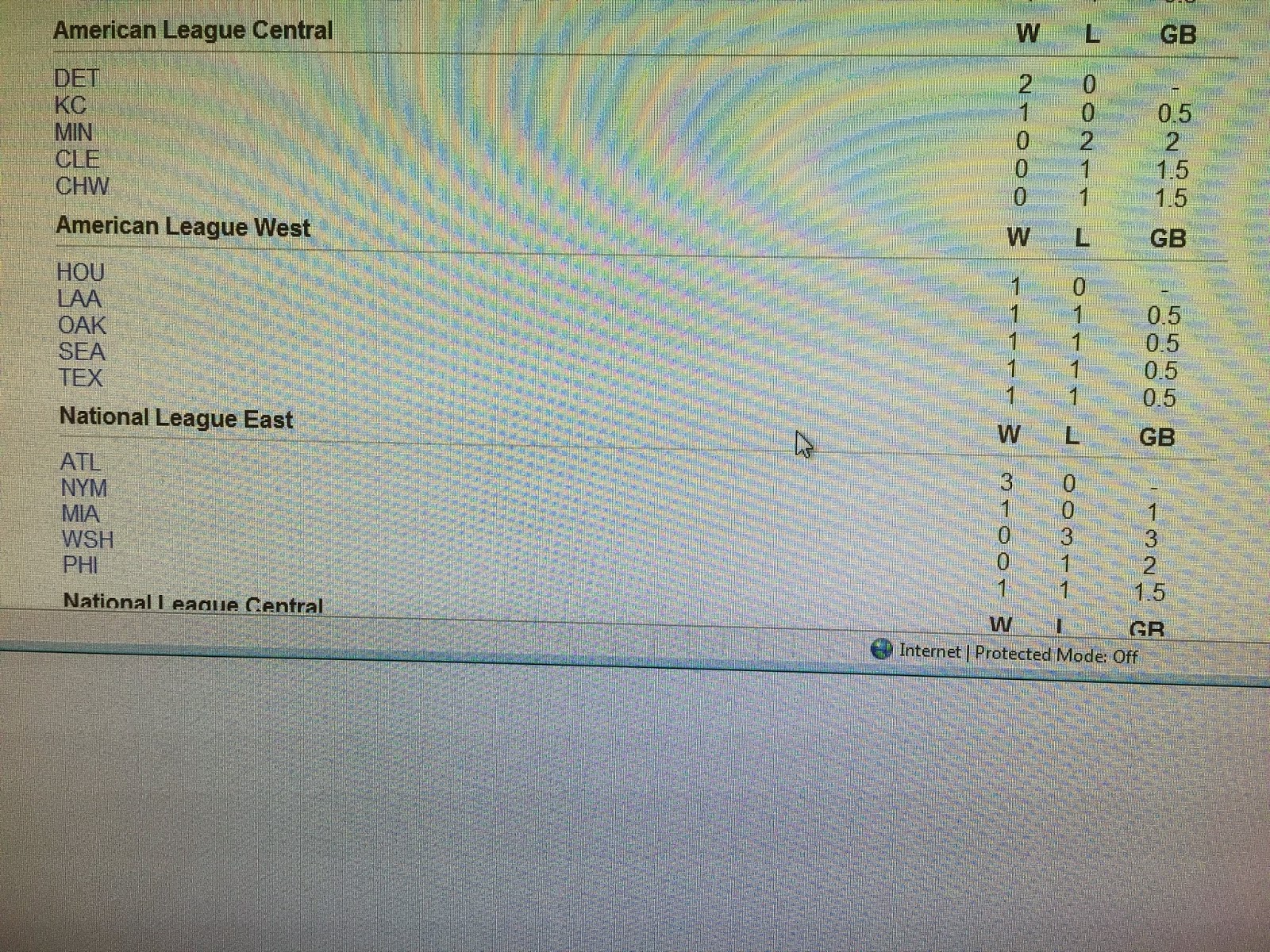 Holy cow, look at Atlanta's start.   Presumably, because Evan Gattis is not there to hold them back...

On the Mound:
Fun fact: Scott Feldman had 8 out of 29 starts last year where he gave up one or fewer runs, earned or otherwise.  That isn't a bad ratio from a guy who you are playing only 10MM a year to throw 180-odd innings over the course of a season.  Tonight, Feldman gave up just a solo home run in the fourth inning - just into the first row of the seats in RF - and hung in there for six and two-thirds solid innings, allowing 5 hits (and no walks) while striking out five.

Feldman cruised through the first two innings, giving up only two-out singles in each frame before retiring the final batter on both occasions.  In the third, he retired the side in order, assisted by Jason Castro who made a nice play on a Bourn bunt.  The fourth was remarkable for the Carlos Santana home run - just over the leaping George Springer and into the hands of a fan reaching over from the second row.  The pitch was a 3-2 rolling curveball - needed to be another few inches lower, perhaps, but Santana (on his 29th birthday!) was certainly good enough to handle it.

Another two-out single was the only blemish in the fifth inning.  Then, perhaps Feldman wanted to mix it up a bit, because he gave up a one-out single (this time) in the sixth, but Carter cleaned up Moss' hard-hit two-out grounder a batter later to finish the frame.  Feldman retired the first two batters in the seventh before yielding to Joe Thatcher, who struck out Lonnie Chisenhall for the third out.

Pat Neshek made his first official pitching appearance in an Astros uniform, and it didn't go well.  Mike Aviles jumped all over a 1-1 elevated fastball off the façade above the Crawford Boxes for a leadoff home run.  The pitch missed a little up-and-in on the righty Aviles.  Neshek then allowed a single to Michael Bourn, but he got the next three hitters on a sac-bunt, a pop out and a strikeout.

The ninth was all Will Harris', and his first official pitching appearance in an Astros uniform was excellent.  Brandon Moss struck out swinging on three pitches, Yan Gomes flew out to right on a 1-0 pitch, and David Murphy grounded a 1-1 force out to second.  Eight pitches, six strikes.  Quite a debut - almost as good as Luke Gregerson's first official inning two days prior.

So the Astros don't have a recent history of consistently starting slowly, and perhaps they have opened the season against the best 1-2 punch in the majors at the moment.  But they have certainly struggled offensively in the first two games of the regular season, as well as the last two games of the exhibition season, so lets hope that the bats wake up soon.

Jason Castro (1-2, 2K) represented the Astros' first baserunner, with a two-out walk in the second.  Jed Lowrie (2-3) singled behind him to put runners on first and second, but Rasmus (0-3, 5 LOBbies) flew out to CF to end the threat.  Jason Castro was also their next baserunner - in the fifth - after he singled on a ground ball.  Lowrie followed with a force-out, then stole second on Rasmus' strikeout.  Handsome Jake (Marisnick, who went 0-2) grounded out to end the threat.

A George Springer (1-3, BB, 2B) one-out first-pitch double on a breaking ball catching the inside corner represented the Astros' first extra-base hit of the season.  But he was stranded as Valbuena and Gattis both struck out, both on pitches not particularly close to the strike zone.  Valbuena went 0-4, 3K, and Gattis earned a large, gold-coloured, Mexican hat with an 0-4, 4K performance.  He seemed late on fastballs up and in.

Jason Castro and Jed Lowrie did their thing again in the seventh - Castro walked with one out against Nick Hagadone, who had relieved Carlos Carrasco.  Carrasco had struck out Carter (0-4, K) as his last batter, and was presumably removed on a pitch limit.   Lowrie then "singled" and Castro took second (looked more like an error to me).  But Rasmus grounded into a perfect first-pitch twin killing to second base to end the frame against a relief pitcher with a variety of letters randomly arranged on the back of his shirt (Rzepczynski).

George Springer was the only baserunner for the Astros for the remainder of the night, after he drew a 2-out walk in the penultimate frame.

Turning Point:
Having Springer on second with one out and the heart of your order up in a tied game is one of my many Astros-related fantasies.  On this occasion, it quickly turned nightmarish, as Valbuena and Gattis both struck out.

Man of the Match:
Jason Castro was on base three times tonight.  He will apparently sit tomorrow (or step in at DH), so that Handsome Hank (let's give that nickname a whirl and see if it sticks) Conger partners with Asher Wojciechowski to form the battery.  But Castro looked ok two nights ago, and he looked good again tonight, so hopes are high for another 130 OPS+ season, á la 2013.

Goat of the Game:
The Valbuena - Gattis offensive black hole earns the goat, for managing only one at-bat between them that didn't result in a strikeout.  And that non-strikeout was a hard hit line-drive that the pitcher snared in a nice bit of glove work.  But because the shortstop was stationed directly behind the pitcher, it is highly unlikely to have resulted in a hit.  May as well have been a strikeout.  Sigh.

Next Up:
A getaway game tomorrow, as the Astros meet the Indians at 2pm Eastern, 1pm Central, 6am NZST.

Trevor Bauer versus Asher Wojciechowski, in his big-league debut.
Posted by Masked Marvel