As you may know, the Astros are hosting this year's Civil Rights Game at Minute Maid Park, taking on Baltimore on May 30.

The Astros' official Twitter feed tweeted out a picture of the uniforms the Astros will wear for the game: 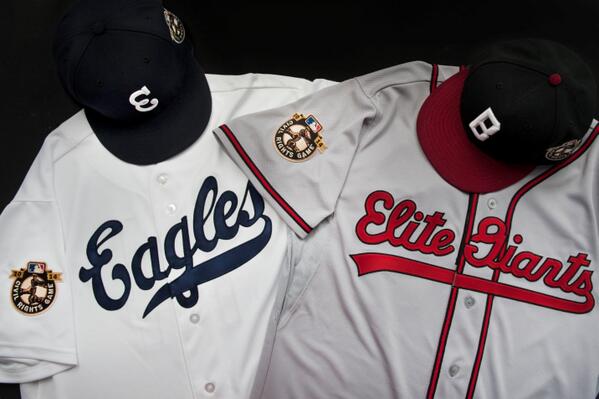 Wait what? you ask? The Houston Eagles? Huh?

Yes. Allow me to take you back to history class...

Andrew Foster was born in Calvert, Texas (Highway 6, between Hearne and Marlin) on September 17, 1879. At Age 17, Foster began his professional career barnstorming with the Waco Yellow Jackets.  By 1902 he was playing for the Chicago Union Giants, which has been credited as being the best black team in the Midwest. He didn't fare well in 1902 - though he did apparently earn his nickname of "Rube" be defeating future Hall of Famer Rube Waddell in 1902 -  and was released, signing with an inter-racial semi-pro team in Michigan. There he showed his potential as a pitcher and signed with the Cuban X-Giants for the 1903 season, where he dominated, and the X-Giants defeated the Philadelphia Giants for the black baseball championship.

John McGraw, manager of the New York Giants, allegedly tried to hire Foster to coach his pitchers. Foster allegedly taught Christy Mathewson how to throw a screwball. Frank Chance said Foster was "the most finished product I've ever seen in the pitcher's box," and Honus Wagner mentioned Foster's name as "one of the greatest pitchers of all-time."

Race riots in Chicago in 1919 convinced Foster to unite black baseball in an effort to improve African-American relations. At the Kansas City YMCA, Foster organized a group of owners into the Negro National League - the first time a league of black baseball teams had been formed, for the 1920 season. As the president and treasurer (and manager of the American Giants), Foster turned the NNL into a successful business. He routinely paid poorer teams' payroll out of his own pocket in order to keep them afloat, and the popularity of the American Giants and the Kansas City Monarchs helped lead to the establishment of other leagues in the country.

Foster was exposed to gas in 1925 and suffered a complete physical and mental breakdown. He was institutionalized and died at an asylum in Illinois on December 9, 1930, and almost 3,000 people were in attendance for his funeral. The first Negro National League folded after the 1931 season, but a second NNL was created for the 1933 season. Three years later Abe and Effa Manley, co-owners of Brooklyn Eagles, purchased the Newark Dodgers and merged the clubs into the Newark Eagles, which boasted one of the finest collections of talent in all of baseball, regardless of skin color: Ray Dandridge, Leon Day, Larry Doby, Monte Irvin, Don Newcombe, Willie Wells, and Biz Mackie were all Eagles. Effa Manley handled the day-to-day operations of the team, making the Eagles the first professional team owned and operated by a woman (Effa Manley is the only female to be enshrined at the Baseball Hall of Fame),

In 1946 the Newark Eagles went 47-16, winning the NNL by 16 games, and faced the Kansas City Monarchs, champions of the Negro American League. The Monarchs, led by future Major Leaguers Satchel Paige, Willard Brown, Connie Johnson, Hilton Smith, Hank Thompson, and the legendary Buck O'Neil, were favored to win the 1946 title, but were upset in the seventh game, giving Newark their first and only title.

Of course Jackie Robinson broke the color barrier in 1947, which brought about the end of the Negro National League following the 1948 season. Baltimore, Philadelphia, and the New York Cubans moved to the Negro American League for 1949. The Manleys sold the Newark Eagles to Memphis businessman W.H. Young, who moved the franchise to Houston and became the first and only Negro Leagues franchise in Texas history.

The Houston Eagles played at Buff Stadium (present day Gulf Freeway and Cullen Blvd) and were in existence for the 1949 and 1950 seasons before low attendance and indifferent media coverage forced them to move again to New Orleans before disbanding forever.