The National Baseball Hall of Fame did something really cool last year when they made thousands of historical scouting reports available to the public. This post is the first in a series in which we'll look at the reports of players that have passed through Houston during their career. A lot of these are, understandably, difficult to read, so I'll do my best to transcribe them as-is while including pictures of a few of them.

First up is Lee May, who played 1st base for the Astros from 1972-1974. Lee came to Houston from Cincinnati with a couple other players in the trade that sent Joe Morgan to the Reds. He was an All-Star in 1972 and hit .274/.317/.471 with 81 home runs during his three years in Houston. After the 1974 season he was traded to Baltimore in the deal that brought Enos Cabell to the Astros.

We have one report from 1968 and two from 1969 that are unattributed, and one from 1977 by Rangers scout Joe Branzell. It's too bad they don't have one from his time with Houston.

1st baseman--Improved over last year. Still has some trouble adjusting to certain pitches. When he learns the pitchers in the League, he could turn out to be a pretty good hitter. Handles things around 1st base o.k. Likes to play, has a lot of bounce.

1st Baseman. Well established hitter. Handles most pitches o.k. Consistent player, didn't slack off all year. Like his make up. Good attitude, and can play.

1st Baseman. Has a little trouble with breaking ball, this keeps his average down. Dont make a bad pitch, tho, he'll get with it. Has some power, and he'll reach most of the fences pretty regular. Does an adequate job around 1st base. Gives you a lot when he is on the field. Could help any club.

GETTING NEAR THE END OF ROPE. STREAK HITTER AND FIRST BALL HITTER, BUT, CAN REALLY CONSECRATE WHEN HE HAS TO GET A HIT, LIKE A RUNNER ON THIRD. HE IS A DIFFERENT HITTER THEN, A MORE DISCIPLINED HITTER AT THIS TIME AND USUALLY MAKES CONTACT WHEN HE HAS TO. GOOD TEAM PLAYER. NO RANGE AT FIRST BASE OR MOBILITY. MURRAY WILL PLAY FIRST BASE HERE NEXT YEAR AND THIS GUY WILL BE THE D.H. COULD HELP A CONTENDER AS DH FOR AT LEAST ANOTHER YEAR. 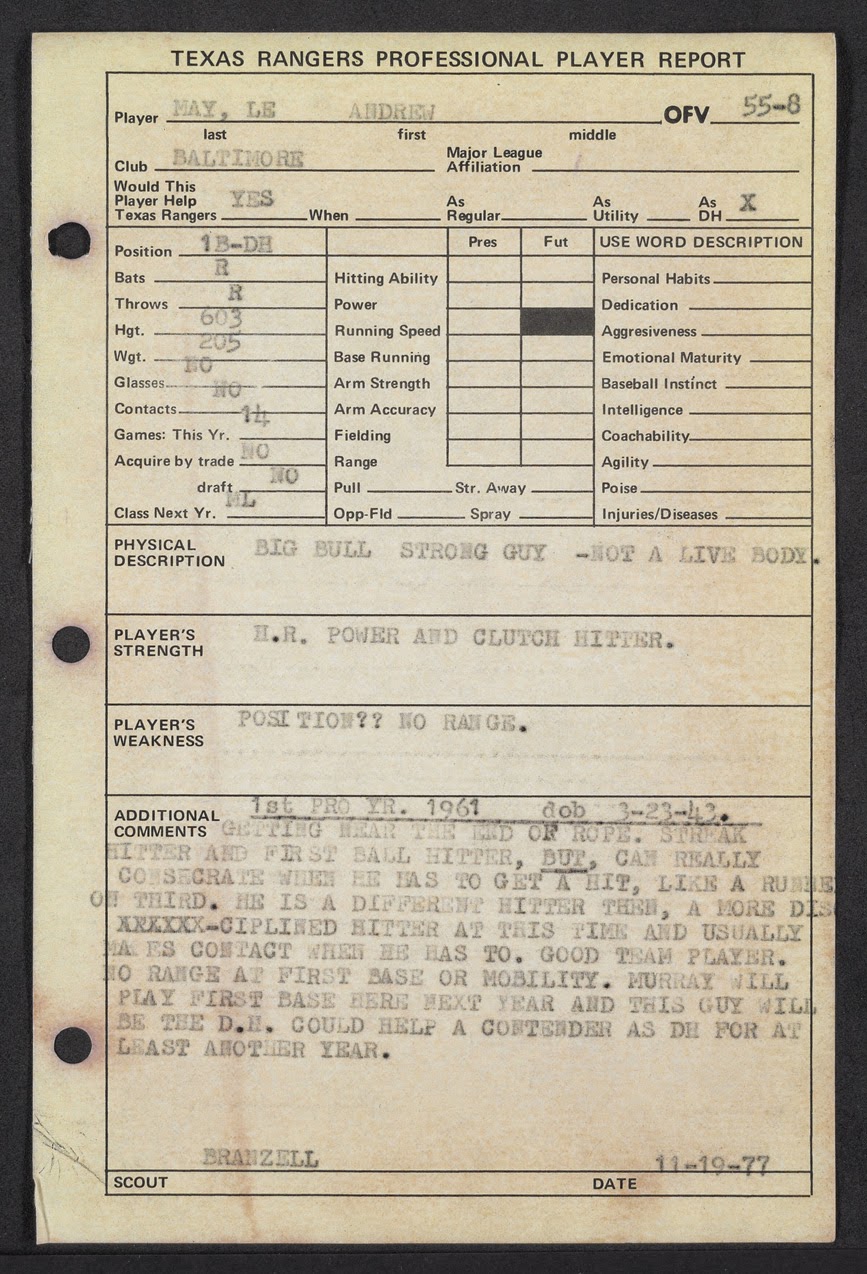