From the Office of the County Clerk - G50: Astros at Mariners

Brett Oberholtzer was recalled and started today in order to grant another days rest to Dallas Keuchal, after his 128 pitch outing against the Angels 5 days ago.  George Springer provided unequivocal proof of not only his power, but also of the healing properties of a uniform number placed close to an injured body part: 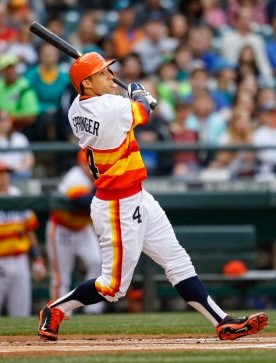 Brett Oberholtzer returned from AAA and pitched effectively despite having some command difficulties with his inside-fastball to righties.  His final line was reflective of a quality start: 6IP, 6H, 3R, 2ER, BB and a career-high 8K.

Obie gave up two runs in the first in a ground out-walk-single-single-throwing error-fly out-K sequence.  The throwing error was made on a hard-hit ground ball to Marc Krauss with the bases loaded, who cleanly fielded the ball and attempted to start the inning-ending double-play at second.  Villar was covering second, and was caught with his feet too close together, so when the throw went to the third-base side of second, he was not able to easily change direction, and the ball rolled into LF.  Two runs scored, and the Mariners erased the deficit that they faced as a result of the two runs the Astros had scored in the top of the first.

Oberholtzer bounced back well, giving up a single and stolen-base in the second, retiring the side in order in the third, fourth and fifth (the last of throes after the Astros scored five runs in the top-half).  He struggled a little in the sixth, giving up a run on a single-fly out-single-RBI single-fielders choice-ground out sequence.  His night was done at that point, and Oberholtzer was able to reflect his first winning performance since 1 September 2013, when he pitched a shutout over the Mariners.  Oberholtzer was 0-10 in his last 11 starts, even after a relatively solid performances in his first four 2014 starts (5.2IP, 3ER; 5.1, 3ER; 7, 1ER, 5.2 1ER).

Darin Downs relieved to start the seventh, and managed to retire the side after Willie Bloomquist's leadoff single.  In the eighth, Downs continued, striking out Justin Smoak, then allowing a single to Kyle Seagar, who scored when the next batter grounded out to third base off Josh Fields.  Fields then retired Michael Saunders to end the eighth.

pr0FF3ss0r_F4rnsw0rth finished the game without incident on a strikeout and two groundouts - the latter of two being a lovely barehanded play by Marwin Gonzalez, standing in for Jose Altuve at second base.

The star of the game was George Springer and his five RBI's.  After Jose Altuve led off the game with a walk, George rocked a thigh-high 93mph fastball which missed out over the plate, and deposited it 6 rows over the right field fence to give the Astros an early two-run lead.  Maurer then settled down, allowing one baserunner over the next three innings, until the Astros broke through and sent 10 batters to the plate in a 5 run fifth.

Chris Carter (2-5, 2B, batting seventh) opened the fifth with a double down the left field line, shortly after missing a home run by hitting a long drive to left field just foul.  Alex Presley (2-4) hit a single to right, and Carter held at third.  Jonathan Villar (0-3, BB) then hit a tailor made double-play ground-ball to Robinson Cano, who could not glove it cleanly, but still managed to tag Presley out at second.  Jose Altuve hit a line drive into right field, and when the throw home was cut off and redirected to second, Villar scampered home all the way from first.  Then George took a 90mph low fastball from Brandon Maurer (again, missing a little over the plate) and deposited it over the Astros bullpen in left-field for his second homer of the day to make the score 6-2.

Tom Wilhelmsen relieved, and walked Fowler (0-4, BB, SB), got Castro (1-5, 2K) to pop out, walked Dominguez (1-4, BB), and gave up a bloop to right field from Marc Krauss (1-3) which scored Fowler.  The inning ended when Chris Carter struck out or popped up grounded out back to the pitcher.

Tom Wilhelmsen started the sixth, and more runs were to follow.  Presley and Villar walked, Altuve singled to load the bases.  A wild pitch scored Presley, and Springer's groundout to short scored Altuve to make the game 9-2.

Jose Altuve's fifth-inning single to RF put the Astros ahead for good.  Three pitches later, George Springer extended the lead to three with his second 2-run home-run on the day.  I encourage the interested reader to pull up the highlight videos and just listen to the sound off the bat.  Goodness me.


Man of the Match:

George Springer makes a triumphant return from an owwie-enforced break to take the MoTM award today, but Brett Oberholtzer also earns himself an honourable mention.  I am going to sew a number over my achey left knee, and see how well it works.


Goat of the Game:

Marc Krauss' throwing error (although Villar gets an assist due to his footwork or lack thereof) muffed a potential double-play.  Thankfully, the Astros pulled away in the fifth and sixth, and it didn't matter.

If the Dallas Keuchal that we have seen over the last month-plus is for real, then tomorrow's game will me an excellent matchup:

The Astros then travel to Kansas City for a 3-game set, then return to Houston to play Baltimore in a 4-game set before having an off day.
Posted by Masked Marvel