On Springer and the Astros

Nobody really seemed too focused on the fact that Jarred Cosart retired the last 15 batters he faced last night. There were two things that seemingly the tens of Astros fans who still care were up in arms about: Carlos Correa's HBP, and the Ken Rosenthal story that the Astros offered George Springer a 7yr/$23m contract last September. That Springer/his agent declined is why Springer is all but assured of starting the season in Oklahoma City, and will be there until the Super Two cutoff has safely passed.

Quick Note: "Super Two" is when a player acquires enough service time to earn an extra year of arbitration. This can cost teams an awful lot of money. More on that later.

The 2011 Astros were the final year of the McLane/Wade Era. They went 56-106, spent over $90m in salaries, and had 13 players on the roster in their 30s. This includes Nelson Figueroa, Carlos Lee, Jason Michaels, Clint Barmes, Jeff Keppinger, Bill Hall, Brandon Lyon, and Jeff Fulchino (among a few others). 47 players suited up for the 2011 Astros. Only Jose Altuve, J.D. Martinez, Carlos Corporan, and Lucas Harrell remain in the organization. That's a 91.4% three-year attrition rate, and Martinez isn't even on the 40-Man roster.

Prior to the 2012 season then-BP employee/current Astros employee Kevin Goldstein ranked the Astros' organization 26th in terms of farm rankings. Since then, you know what has happened: Just about everybody got traded, the farm system is now either at the top or in the top five in all of baseball, and - oh yeah - the Astros are fighting to get out of their existing terrible RSN in which they haven't been paid since July 2013, and they lost 218 more games. We dubbed 2011-2013 as the Astros "Crynasty," because in those three years the Astros lost 118 games more than the Rangers (who had the best three-year record), and they lost 33 games more than the 29th place Twins. We've had the blocked bunt and the buttslide.

The Astros have a plan. And by God, they're going to stick to it, regardless of what Buster Olney, Ken Rosenthal, Derrick Goold, Scott Boras, or any fans (especially bloggers) collectively think about said plan. And the plan, in a nutshell, was to tear an aging, expensive franchise down to the nubs, and then burn those nubs. Only when they had milked every last drop of that older team would they turn things around, and it has started.

So when Rosenthal's column dropped like 3rd period French, it was a shock and a surprise. Rosenthal took shots at the Astros by way of taking shots at The System. But let's not kid ourselves, The System rewards teams, not players. Regard what MLB has done over the past 36 months: Spending caps and taxes on the draft. Spending caps and taxes on international free agents. Reconfiguring the posting system for Japanese players. Qualifying Offers. Keeping Super-Two statuses.

And it's that Super Two status that leads us to where we are today, and it leads us back to The Plan. The Plan includes not spending on overpriced free agents that won't help the team in the long run. This is why the Astros were allegedly in on Shin-Soo Choo, Jose Abreu and Masahiro Tanaka, but weren't willing to commit the money it ultimately cost to actually sign them. It's certainly why the Astros weren't in on Robinson Cano, Bronson Arroyo, Grant Balfour, Joaquin Benoit, A.J. Burnett, Marlon Byrd, Jacoby Ellsbury, Matt Garza, Phil Hughes, Ricky Nolasco, Ubaldo Jimenez, Nelson Cruz, Kendrys Morales, name a free agent that cost more than $10m per year. The last three were particularly unpalatable because the Astros would have to give up the comp pick they received from the Orioles in the Bud Norris trade. But none of the above players were signed because the Astros have prospects coming down the pike that - while they may not be better - they're certainly cheaper.

Remember this from last August? 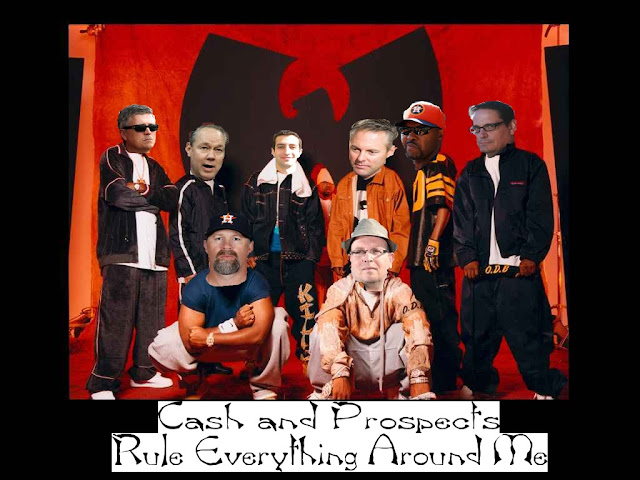 If George Springer made the Opening Day roster, his service clock would begin on April 1 and would ensure - provided he didn't get sent down for a decent period of time during the season - that Springer would receive an extra year of arbitration. Mets blog Amazin Avenue posted a great look at the true cost of a Super Two player last Spring, figuring up that a Super Two player costs a team approximately an extra $12m. That's nothing to sneeze at for a team that looks like it won't receive any television revenue from their own damn network any time soon. And let's not forget that you can bet Jon Singleton and Mike Foltynewicz are in line to enter arbitration years (and, of course, free agency) at the same time as Springer.

Still, it seems as though the issue comes from the offer the Astros made: $23m over seven years (almost $3.3m/year) seems awfully low for a player like Springer, even if it is based on potential. Keeping in mind that this offer was presumably made before the end of the season, it's worth noting that Marlon Byrd got a contract this offseason worth $16m over two years. Rafael Furcal fergoodnesssakes will get $3.5m this year from Miami.

(Not Hank) Aaron wrote earlier this morning that the Astros were essentially trying to buy a year of George Springer's service time. If he had accepted the deal, the Astros wouldn't have to worry about Springer's service time. He didn't, so the Astros are going to send him back to Triple-A until they don't have to worry about it, after all. And it's easy enough to look and see that Springer was 5x31 with one extra-base hit in Spring Training this season.

The news that Springer was getting sent back to the minors was met this morning with much hand-wringing. Matthew Pouliot wrote this for Hardball Talk last night:
Jacoby Ellsbury is about to make $21 million this year in his seventh big-league season. The Astros wanted to pay Springer barely more than that for seven seasons combined. Even though it’s $23 million guaranteed for a player who hasn’t set foot in the majors yet, it simply wasn’t a competitive offer. I might even consider it extortion.

I'm not willing to go that far. Do I want to see George Springer in Houston on April 1? Yes. But the Astros have long taken a Big-Picture-View of the organization. The Astros are planning on needing Springer more in 2019 or 2020 than they are for the first 60 games of a season in which avoiding 100 losses will result in nude dancing (at least in my house). Is it shady? Maybe. Is it "gaming the system?" Heck yeah it is, and that's what the Astros have been doing for two years now, beginning with the 2012 draft that produced Carlos Correa, Lance McCullers, and Rio Ruiz.

The difference, though, is that it's the Astros holding Springer back because of what is assumed as the Super Two deadline. The Mets received a sentence in Rosenthal's post for doing the same thing to Matt Harvey, Zack Wheeler, and now probably Noah Syndergaard for three straight years. Maybe everyone is just tired of beating up on the finances of the Mets.

Basically the only time in the last two years that anyone on a national level has taken a look at the Astros, it's to wring their hands about the Astros' payroll and process. Well, the top-to-bottom process has always been to sacrifice the present - and that includes fans - for the future. The Astros are betting that there will be more fans in 201X (fill in the blank), when we're all used to the American League, can actually watch games on television, and the team is (ideally) contending for the playoffs.

Is it fun now? Absolutely not. But if everything works out the way we've been promised - or at least the way we've rationalized the Crynasty to ourselves - maybe, just maybe, we'll look back on this six years from now and smile.
Posted by Astros County