Surprise! The Astros are AL West Favorites in 2021

Yesterday, pitchers and catchers reported to the Astros Spring Training facility in West Palm Beach. Thus, the 2020-21 off-season—both the shortest and longest in history--ended. We can now turn fully toward the 2021 season and assess where the Astros stand. 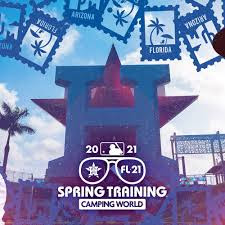 I will a claim that seems obvious to me yet feels controversial based on the conversations I’ve had with Astros fans this off-season: the Astros are the favorites to win the American League West.

Vegas agrees with my fellow pointy-head types. The sportsbook at the Wynn Casino opened up betting on over-under win totals for MLB teams last week. Their number for the Astros was 90, above both the Angels (85) and A’s (84).

The reason that the Astros are the favorites for the division is clear. They have the strongest and deepest core of players of any team in the division. The offense is led by five star level players-- Bregman, Correa, Altuve, Yordan, Tucker—and is supplemented by quality regular Michael Brantley. It’s the best core in the division.

The Angels have the division’s best player in Mike Trout, and another MVP candidate in Anthony Rendon.  But after that, their best position player is Jose Iglesias, who came over from the Orioles in an off-season trade. They are not as deep as the Astros.

The A’s have a strong core of star level young players in Matt Chapman, Matt Olson, and Ramon Laureano.  But outside of these three stars and catcher Sean Murphy, that’s it for star power, or even potential star power in the A’s lineup.

The pitching staffs are closer together in projected value. Projections show little difference between the starting rotations of the three AL West contenders. The Astros have more depth in the #3 through #5 spots of their rotation than A’s or Angels, but have less quality in starters who replace an injured member of the rotation.

The teams are even in the pitching staff, but the Astros have the best lineup in the AL West. It’s why they are the favorite.

Despite the projections, the Vegas odds, and the strength and depth of the Astros lineup, my sense is that most Astros fans do not think that the team is favored to win the AL West this year. There is a sense of dread and despair that I have found among my friends and among Astro Twitter.

There are several explanations for this phenomenon.  The first and most obvious is that the Astros did not win the AL West in 2020.

The second is that the major off-season story for the Astros was the loss of George Springer, who signed with the Blue Jays.  Certainly, the loss of a player whose on-field talents were matched by his enthusiastic and effusive personality hurts both on and off the field in 2021.

And third, the Astros hot stove this off-season was not all that hot. The biggest move was re-signing their own player (Brantley); the additions were modest (Ryne Stanek, Pedro Baez, and Jason Castro won’t sell any tickets), and the front office has eschewed signing a free agent centerfielder and will do with Myles Straw as he everyday centerfielder. None of these moves will fire up the fanbase.

The Astros have prioritized staying under the competitive balance tax threshold of $210 million, treating it like most teams do, as a de facto salary cap. The biggest beneficiaries of this choice are Jim Crane’s heirs.

The choice to sign Brantley at $16 million a year for two year compelled the budget conscious front office to back off on signing a replacement for Springer in CF. And with the largest item on the Astros CBT sheet being the $33 million that will go to Justin Verlander and his Tommy John recovery, the Astros payroll situation limited the off-season choices.

But I recommend a focus on the big picture of the roster. Off-season news focuses on the shiny objects that join the team. But in the big picture, the Astros retained their strong and deep core of lineup options. The talent we have watched in each of the last four American League Championship Series is here again in 2021.

With that being said, there is a fourth explanation for the fanbase’s pessimism. The Astros status as division favorites is more tenuous than it has been in previous years. The Astros have been the pre-season AL West favorite for every season since 2017. But the current team is not as strong as the 100-win juggernauts of 2017-2019. With stars such as Springer, Cole, and Verlander not on the roster in 2021, the squad’s margin over its AL West rivals is not as large as in previous years.  The Astros lost the division in 2020 in large part because its stars underperformed. There is not enough depth on the roster to overcome a repeat performance.

It will be harder for the Astros to win the AL West in 2021 than it was from 2017 to 2019. But difficult it not impossible, or even unlikely. Despite losing star players and the modest additions to the team in the off-season, they still retain the broadest and deepest set of star players in the AL West. If these players perform at their career norms, we can expect the Astros to win the division, go to the playoffs again, and to challenger to reach their fifth straight ALCS.

Be optimistic. They can do this.