I remember the first time I said, "who" when they mentioned Tyler White's name. 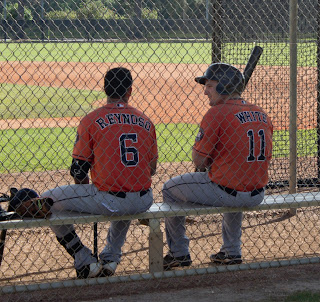 I was promptly scolded for not knowing he was a hitting beast. He was drafted in the 33rd round out of Western Carolina. In 519 minor league games he hit .305/.404/.509. In 234 major league games he's hit .239/.320/.425 with a 104 wRC+. He's been an average major league hitter for the Astros. That's not to be overlooked when you consider the Astros have to play interleague games and potentially use pinch hitters more in three or four games for the World Series.

White's out of options, which is why the Astros are hesitant to just let him go. He'll be picked up by another team and I imagine the Astros would like to avoid another JD Martinez (a 20th round pick) decision. We need to appreciate White for who he is. White isn't a starter. He's a bench player that will give you a solid at bat at the plate and could potentially be more.