Should We Astros Fans Care About the Super 2 Deadline

Now would be a good time to call Yordan Alvarez to the big club @Astros #TakeItBack #Now
— JediMindTrix (@OldJediMindTrix) May 25, 2019

Some used gifs to convey their point.

Some gave survey answers that make no sense, but make perfect sense 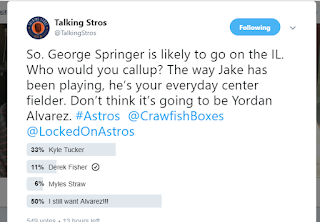 But seemingly all agreed with this sentiment.

The Astros responded by calling up Derek Fisher to take Springer’s roster spot, leaving Alvarez in Round Rock.

So why did the Astros ignore the wisdom of the Twitter masses and keep Alvarez in AAA for now. Chandler Rome gave the answer in his most recent mailbag “Houston appears ready to wait until the ambiguous Super 2 cutoff passes” to call up Alvarez.

Now, as a fan who doesn’t spend his life obsessing over the details of the MLB Collective Bargaining Unit, you may be asking “What in God’s name is the Super 2 Deadline?” Click the link for details.  The most important thing to know is that while the Super 2 cutoff date is ambiguous, it is usually between June 3 and June 13.  In short, we are unlikely to see Alvarez in Houston for a couple of weeks still.

I focus in this article on the question of why we Astros fans should care about the Super Two deadline.  There are two reasons to care—saving money and staying under the Competitive Balance Tax threshold (also known as the Luxury Tax).

The first reason to care about the Super Two deadline is that the Astros will save money if they hold back Alvarez until after the deadline.  And by the Astros, I mean Jim Crane.  As a result of holding back Alvarez, Jim Crane will now have more money to pass on to his children and his children’s children, and so on.  Congratulations to the yet-to-be-born Crane heirs on their purchase of new ivory back scratchers.

But saving some money on Alvarez may hold benefits not just for future heirs of Jim Crane. It may hold some benefit for the Astros teams of the future. Holding back Alvarez past the Super 2 deadline means that the Astros will be able to offer a contract at or near the league minimum of $550,000 in the 2022 season. If the Astros call up Alvarez now and he never gets sent down to the minors, Alvarez will be eligible for the salary arbitration process that season.

How much money is the arbitration process worth?  Here is one example. George Springer qualified for arbitration under the Super 2 provision after the 2016 season, He signed a one-year contract for $3.9 million. Carlos Correa was held down in the minors until after the Super 2 deadline (June 8, 2015). As a result, the Astros avoided arbitration with Correa in 2018. They paid him $1M that season and are paying their star shortstop $5M this season.

Avoiding the Super 2 deadline is thus worth about $3-4M for the Astros payroll in 2022, assuming that Alvarez is an everyday player. But there are also implications for seasons beyond 2022. The arbitration system is designed to increase salaries of players as the increase in service time. So a player who gets $3.9M his first year in arbitration gets a salary increase his next season, and the next, and the next, and the next.  In short, the team saves $3-$4 million in future years as well. In the case of Alvarez, those savings will continue in the 2023 through 2026 seasons.

Does that savings matter?  Well, it depends on what the budget is for the Astros payroll. Like many baseball teams, it appears that the Astros are using the luxury tax as a salary cap.

One would expect that the team’s payroll will remain near the luxury tax threshold for the next several years. The team already has $138.9M in guaranteed payroll for 2020. And that does not include salary figures for players up for arbitration (Correa, Springer, Roberto Osuna, Lance McCullers) and any free agent signings (we are again going to sign a catcher in free agency next year).

The Astros have a team of good players and they are going to want commensurate salaries. If the team is going to bump up against but not go over the luxury tax threshold, saving $3-$4 million dollars a season might by very valuable.  This off-season, the team signed Robinson Chirinos for a salary of $4.5 million.

Now, the question of whether the Astros should stay under the luxury tax threshold is a separate question.  I have posited that future Astros teams (and thus us as their fans) will benefit from staying under the luxury tax threshold. But all it costs to go over the tax threshold is Jim Crane’s money. So staying under the tax is just another way to save Jim Crane’s great-grand children money.  And while I’m sure they will appreciate it, I will note that they do not yet exist. Yordan Alvarez certainly does.  He’s right down there in Round Rock, where he will remain for the next several weeks.