Whither the Great White Shark

Opening Day starts with promise.  And that promise surely brought more happiness to Tyler White than any other player on the Astros 25-man roster. After years of working his way up from a 33th round draft pick and three years of going up and down between Fresno and Houston, White had secured a spot in the Opening Day starting lineup as the DH. 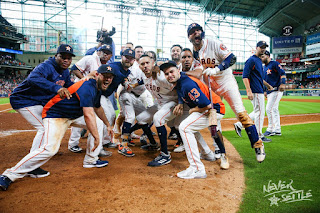 As the 2019 season began, there was every reason for an Astros fan to be optimistic about White. Various projection systems projected him to have a wRC+ of between 110 and 122. Not an All-Star level, but a contributing level on a team packed with offensive stars.

The reality of Tyler White's 2019 season, so far, has not met the promise of opening day. White is slashing .212/.333/.242 with a 71 wRC+.  That mean White is batting 71% of league average...and that's not even accounting for the fact that he plays the easiest defensive position--DH.

As White's production has decline, so has his playing time. He has started only 9 of the team's 21 games so far this season, and only 7 at his position on opening day--DH. The other potential DH candidate on the roster has done just as poorly. Tony Kemp has slashed .156/.270/.250.

As a result, AJ Hinch has tended to rotate the DH spot around the regulars. George Springer has served as DH in 5 (!) games, Michael Brantley for 3, and Jose Altuve once (Kemp has started at DH 4 times). With the team at the beginning of a stretch of 26 games in 27 days, expect Hinch to more liberally use the DH as a way to get his regulars some time off of their feet.

But the big question that White's (and Kemp's) horrid start leaves for the Astros is should they keep these two on the roster, or should they try to find another alternative at DH.  Complicating this question is that both White and Kemp are out of minor league option years. The front office cannot send either one down to the minors without first exposing them to waivers, and both White and Kemp are almost certain to be claimed by at least one of the other 29 MLB teams. And while both White and Kemp are valuable enough to occupy one of the 750 active major league roster spots in MLB, neither is so valuable that they would be likely to bring back anything more than a Grade C prospect in a trade.

White and Kemp also serve as valuable depth pieces for the Astros. The team has been blessed by good injury luck so far in 2019. Carlos Correa and Alex Bregman have both had to miss a couple of games with minor injuries, but both quickly returned to form. As a result, the Astros have avoided using the disabled list for a position player so far this season. But that will not last. Somebody will get injured, and there will be PAs available.

I think the best solution to the slow start of Tyler White is to give him time to see if he can turn it around. His track record indicates that he is a much better hitter than he has shown so far, and the season is only about 13% complete.  Players tend to move toward their projections over time. And while that means we are extremely unlikely to get the 144 wRC+ version of White was saw last season, we are likely to get the 112 to 120 wRC+ version that was projected for this year.

It is worth noting that despite the struggles of White (and Kemp) the team is playing and batting well. The team has a .612 winning percentage, which would produce 100 wins over the course of 162 games. The Astros have 10 players with a wRC+ of 100 or greater. The Astros lead the American League in batting average and on base percentage, and are third in slugging and OPS. In short, there is no reason to panic right now (we're not the Red Sox).

Obviously, patience does not have to last all season. The Astros have two excellent hitting prospects at Round Rock in the persons of Kyle Tucker and Yordan Alvarez. The promotion of either could lead to an improvement at DH--Alvarez would probably step directly into the DH role while Tucker would push Michael Brantley to DH. The Astros also have the prospect capital to acquire a power hitter to replace White.  There are potential solutions if White (or Kemp) continue to struggle.

But for now, the best course is to see if Tyler White can get back the power stroke he used so effectively in 2018. White has maintained his eye at the plate, and has a walk rate of 15.4%. If he can cut down on the strikeouts (a 33.0% rate this year compared to 20.7% last year, he can hopefully get back to form. That is the best hope for Astros fans...for now.