I AM THE SMARTEST MAN ALIVE

So when I first started the harrowing application process to become an Astros County contributer, I was pretty unsure of myself and my abilities. I had no idea I could be so awesome and entertaining. I didn't know my words would bring me tens and tens of followers on the twitter dot com. I was completely unaware that my wife would actually believe me when I said I was watching the Astros 'for the website', and most important of all, I didn't realize that I was basically Miss Cleo (RIP).

When I first drunk DMed Mr. County, I was sure he'd just flat out ignore me. I mean, it's been a while since I was single, but I'm pretty sure that's how DMs work. You send them, you get nothing back, you send another with your shirt off, you get blocked. Circle of life! Well much to my surprise, he hit me right back saying even though he was going to be a famous writer for The Athletic, he was still going to be cranking out those sweet sweet hot links. Me not being someone who would pass up an opportunity to ride the coattails of a more successful and less scatter brained person, asked if I could contribute a line or two from time to time. I offered to send him over a few ideas, and AC said he'd gladly take a look. That was mid March. I heard NOTHING back for two weeks. Oh and I KNOW he saw it cuz the little thing said 'read' and he was on twitter like every damn day so I was all "well screw this, man! I'll start my own blog called Astros City and I'll post pictures of my dog Willie Nelson and make fun of Jackie and Chance and NO ONE ELSE WILL BE INVITED!

So, a day or two before the season, I get another message from the big guy saying he forgot to reply and he loved my ideas and the only rules were don't sweat the petty and don't pet the sweaty, or something like that. I was stoked. I told you all that to tell you all this... One of my prompts was a hypothetical future where the Astros just played their 50th game of the year, and I was doing a review of the week. You guys ain't gonna believe this shit. I was off a little on the record (had em at 44-10), Correa's HR total (20? oops), and a few other stats, but I pretty much nailed the rest. I even had the good guys winning on 5/22 by a score of 10 to 2! Close! Let's break it down....


Here's a screen shot from the email: 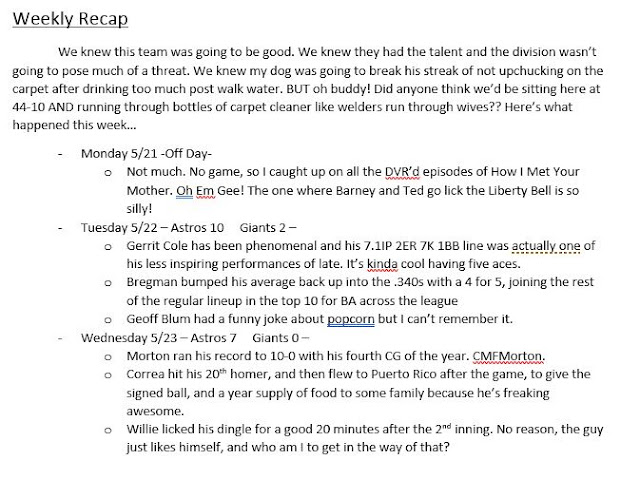 Ok so first off I watched a bunch of Friends episodes on Monday, not HIMYM, but everyone knows Friends is just a cheap knock off of HIMYM and DONT YOU EVEN COME AT ME WITH A CALENDAR TRACI WE BOTH KNOW SOMEONE MESSED WITH OUR REALITY'S TIMELINE AND MY FAVORITE SHOW IS WAY BETTER THAN DUMB OLE ROSS MOPING ABOUT BECAUSE HE HAS SAD FEELINGS ABOUT RACHEL AGAAAIINNN...

Next we come to Tuesday. First of all, they won 11 to 2, not 10 to 2. That's neat! I assumed the rotation would stay in tact, so Cole did actually start the game. His real life line was 6.0 IP 2ER 8K 3BB. Pretty damn close, folks. "actually one of his less inspiring performances"? Check. "It's kinda cool having five aces"? CHECK. Bregman isn't leading the league in BA but he's been solid as hell, and he's a second half dude. Blum had a couple jokes that made me chuckle but that's every night. Safe bet on that one.

Wednesday I missed on Morton because Hinch likes changing his rotation and lineup almost as much as my dear friend Chance likes wearing eyeliner and looking like Old Greg. BUT Morton IS undefeated. He IS CMFMorton. And the Stros DID beat the Giants again. Springer homered, not Correa, but in my defense they kinda look alike sometimes. My dog lickin his dingle is about as common as anything else, so that was a layup, if I'm being honest.

So there you have it! I'm awesome and you are all lucky to have me in your lives. I will be spending this weekend in Bolivar with Jackie, Gary, our wives, and a bunch of local slopness monsters, watching the Injuns struggle against Morton thru Cole, and come Monday we'll have a finely tuned, and thoroughly researched series recap for you guys.