Good job, Roggits. Justin Verlander turned in a dominating early performance, the Astros finally got the Big Hit they needed, and Jose Altuve finally hit his first home run of the season. Ken Giles locked it down and the Astros salvaged a win in the series before the off-day. Jexas has the series recap.

*Check out Jose Altuve getting the silent treatment:

Altuve:
It feels like a dream come true. I was the last guy in the lineup without a homer, and I wanted to get that one out of the way, and I finally did.

*Alex Bregman collected his first multi-RBI game of the season. He has hits in seven of his last eight games. Bregman:
The guys did a great job getting on base in front of me...When we get people on base we've got to lock it in and come through for the team.

*So Derek Fisher hit a home run on Tuesday night and then Jake Marisnick broke one off himself yesterday. These are the End Times.

*Verlander was dominant, throwing 7IP, 4H/2ER, 9K:0BB. Verlander:
You don't ever want to be the guy starting on the last day of the series and your team is facing a sweep, but my job's to end it. We are tough to sweep because of our pitching matchups, our 1-5, and our rotation. The old adage, 'You're only as good as the next day's starting pitcher,' and I think we like our chances every day.

*By the end of the 4th he had thrown just 38 pitches. He threw 31 pitches in the 4th inning against the White Sox his last time out. While it was his 3rd start (out of six) with 9+ strikeouts, it was his first walk-less start of the season and his first 9K:0BB game since World Series Game 6. He had two such starts in the 2017 regular season.

*Max Stassi has now caught all seven of the Astros' starting pitchers. Hinch:
There's some familiarity that comes with that and his comfort is showing up in how confident he is receiving the ball.

*Do you want a Charlie F. Morton shirt? 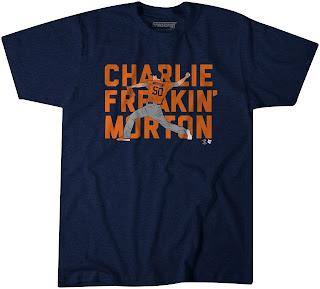 
*The LA Times' Dylan Hernandez says this series - this series in April, this series in April in which the Astros and Angels both scored twelve runs - proves that the Angels are For Real:
They might not finish ahead of the Astros in the American League West, but they are certain to push them. Their victories in Houston were a symbol of the team's resilience and a testament to manager Mike Scioscia's resourcefulness.

It was also a testament to how terrible Joe Smith was on Tuesday, but if you want to interpret that as Geniuscioscia and a key to meaningful baseball in September for Anaheim, okay.

*Over at FanGraphs Jay Jaffe wrote about the Astros eight-game streak of allowing two runs or less, and put it in historical context.

*Missed this from a couple of days ago, but MoiseKapenda Bower brought up this crazy story. In Baseball Prospectus, Matthew Trueblood makes a convincing case that Albert Pujols isn't 38, but rather 40-41 years old.

*In HEADS-UP The Athletic:
-Eno Sarris asks if trying to lift the ball leads to more strikeouts.

*From Jerry Crasnick: How Trevor Bauer set about becoming a better teammate.