14.9% of the fly balls Astros relievers allowed left the yard, 3rd-worst in the Majors, worst in the AL.

*I teach two subjects: two sections of AP US History and four of regular US History. I have one baseball (Rangers, of course) super-fan in one of my AP classes that just happens to coincide with lunch and, after the slump the Astros went through in August, he was expressing doubts about the 2017 Astros' chances. I flippantly said that, if the Astros won the World Series, I'd buy them pizza. One of them told my other AP class, and they wanted in, too. So I said okay, if the Astros win the World Series, I'd buy both AP classes pizza.


Told my AP US History students I’d buy them pizza if the @Astros won the World Series. So that’ll be $54, guys. pic.twitter.com/EWDbcsKn68
— Thickie Don (@AstrosCounty) November 10, 2017

Response A: You can piss right off. $5 pizzas are right in my budget. I'M A PUBLIC SCHOOL TEACHER DADGUMMIT, I CAN'T AFFORD TO BUY YOUR FREAKING ARTISANAL WOOD-FIRED PIZZA FULL OF FINE CURED MEATS AND CHEESES FOR 40 HIGH SCHOOL JUNIORS, MUCH LESS THE 85 OTHER STUDENTS WHOSE PARTY IS COMING BETWEEN NOW AND CHRISTMAS BREAK.

Response B: I had to find a place that would have them ready to pick up at 10:30, so I could be back to school in time for class.

Response C: One of the students who received said pizza works at the Little Caesar's store from which I ordered them.

Which led to this:

Well since you've already bought it set up the account and they can have another pizza day on me #gostros https://t.co/0LQTLArATX
— Tyler White (@twhite409) November 11, 2017

Update - 5:25am: I created the Venmo account and will wait to see what happens. I've never had a bad thing to say about Tyler White, and even the gesture makes this one of the coolest things to ever happen. Tyler White is a Real G. 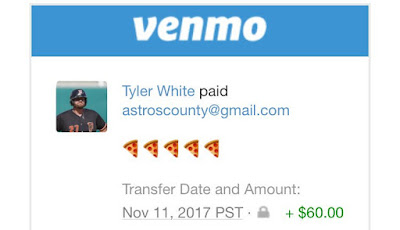 All The Shoutouts to Tyler White. My students are going to flip when I tell them. Solid all around.

*Peter Gammons talked to a GM who compared Alex Bregman to Paul Molitor, and that is just fine by me.

*ESPN's Howard Bryant has a good retrospective of the 2017 baseball season.

*Paul Quinn College turned its football field into an organic farm, and it changed the community.
Posted by Astros County