From the Office of the County Clerk: G84 - Astros versus Mariners

The big news of the baseballing day is probably nothing to do with this game, but was rather the announcements of the 2016 All Star Squads.  On that note, and shortly prior to this game, José Altuve learned of the unsurprising news that he will be starting the game for the American League at Second Base.  Will Harris learnt that he will be going with José Altuve in San Diego next week, and rightly so.  All Harris has done since being claimed off waivers in the 2014-15 offseason (entering this game) is throw 107.2 frames of 1.50 ERA ball, allowing 68 hits and 28 walks against 104 strikeouts.  His triple-slash over that period is .178/.234/.257, so he has turned every batter he has faced into April-May Carlos Gómez.  Only 13 of his 68 hits have been for extra bases (including none in 2016).  All that equates to 4.2 WAR (according to Baseball Reference) or 2.0 WAR (according to FanGraphs), which spells nothing but consistent excellence for a reliever.

So congratulations to both Harris and Altuve, and I hope they get plenty of rest during the All Star break, in addition to enjoying the experience and celebrating their excellence in 2016 as well.  George Springer deserves to be there as well, so we should all be trying to vote him in.  However, Springer is also a walking injury risk, and it wouldn't be the worst thing to have him rest for the four day stretch, either.

Turning our attention to this game, the Astros hit three home runs, including the first Colby Jack at MMP since Craig Kimbrel pitched in late April.  Dallas Keuchel was effective, and logged clutch outs as the game went on, as the Astros won by a score of 5-2.  That gave the Astros two in a row against the Mariners, on a night when the Ramgers pounded on Craig Kimbrel late in Boston.  Read on for more detail (well, about the Astros at least, 'cause I sure-as-heck ain't writing about my two least favourite AL teams)...

On the Mound:
Dallas Keuchel has scuffled a little in 2016 - that will surprise no Astros fans - but he was pretty solid tonight, without returning to his dominant 2014 or 2015 self.  He needed exactly 100 pitches to pitch six frames, allowing six baserunners (5 hits, 1 walk) against six strikeouts.  Two earned runs were the damage, one of them on a freakish piece of hitting by Nelson Cruz.  Not the greatest start, but solid progress it would seem.

Keuchel recorded two perfect frames - the first and the third.  He struck out one batter in each of those frames.  In the second he allowed a run on a one-out Dae-Ho Lee swinging bunt to third base (for an infield single), and Kyle Seager double off the bottom of the bullpen wall in RF (sending Lee to third, and also with one out) and a Chris Iannetta 3-0 grounder to shortstop, scoring Lee.  Dan Robertson was the next hitter up, and he lost out to Dallas Keuchel in a footrace to first base after he grounded it to the right side.  No mean feat for Keuchel to win that one - Robertson is fast.

That takes us to the fourth inning.  Keuchel quickly retired Robinson Canó, which brought up Nelson Cruz.  This at bat is better summed up with an image: 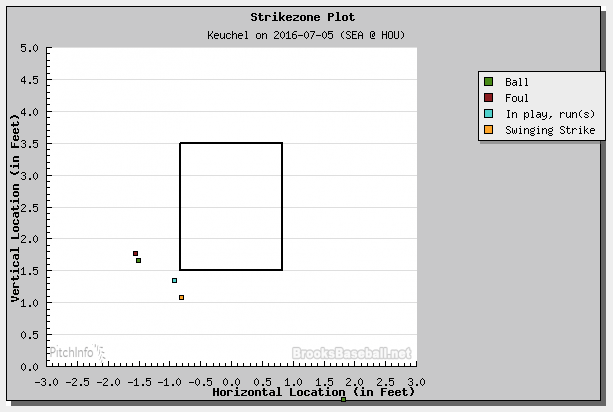 Dallas Keuchel threw five pitches to run the count to 2-2.  The fifth pitch is not seen - it was low and away, clearly out of the strike zone.  So Keuchel threw five pitches, none in the strike zone, to run the count to 2-2.  Then Cruz homered.  Off a pitch down and well off the plate, probably more impressive than the plot would suggest because of Cruz's height.  As you can imagine, it was a breaking ball, and Cruz golfed it into the LF power alley, hitting the bottom of the fence that stops the punters falling off the concourse onto the field.  Wow.

Keuchel worked around more traffic in the fifth and sixth innings, getting third outs with runners on third base both times.  In the fifth, Chris Iannetta singled off the wall in left - Colby played the carom perfectly to keep him to a single.  Dan Robinson then grounded to second base, and the Astros were unable to turn the DP.  Robinson advanced to second when Correa spiked the throw, which got away from MarGo, and later to third on a wild pitch.  He was stranded when Leonys Martín looked at an 0-2 fastball down the middle for strike three.  In the sixth, Robinson Canó singled and Nelson Cruz walked with one out, but Keuchel set down Dae-Ho Lee and Kyle Seager to record the scoreless frame.

Pat Neshek got the seventh against the 7-8-9 hitters, and he set them down in order (including the lefty pinch-hitter, Shawn O'Malley).  Ken Giles allowed only a one-out single on a broken-bat soft line-drive to RF in recording a scoreless frame (including a strikeout of Nelson Cruz on an unhittable slider).  Will Harris added another scoreless inning to his resume, allowing only an anti-shift ground-ball single with one out.  Harris struck out the next two hitters to preserve the win and close out the game.

At the Plate:
Taijuan Walker has traditionally had the Astros' number, but tonight he struggled a bit, giving up five runs on three home runs.  He left the game after four with an apparent foot injury.  He looked uncomfortable for the last few batters that he faced, which was at the end of a four-run fourth inning.

But the first run scored in the second inning.  Walker had set the side down in order in the first, and in the second Colby Rasmus struck out on high cheese for the second out.  That brought up Luis Valbuena, and he got a 1-1 splitter that was middle-up.  Valbuena turned on it, hammering a deep drive that landed about 10 yards fair, half way up the second deck.  Impressive drive - Valbuena's tenth of the year.

Walker bounced back to allow only a two-out single in the third.  A.J. Reed struck out for the first out on a fastball up and away in the third.  In the fourth, José Altuve reached on an infield single to shortstop (Ketel Marte double-clutched going to his right) and stole second.  After a Correa strikeout on an inside splitter, Colby Rasmus followed by pounding a low fastball in the middle of the plate over the Astros' bullpen in RF.  That made the score 3-2, and gave the Astros a lead they would not relinquish.

But they weren't done there.  Luis Valbuena followed with a walk and a bat-flip (more of a bat-flip than when he hit the home run, anyhow) and after Carlos Gómez flew out, A.J. Reed got a 2-2 fastball, up and away and similar to the one he previously struck out on.  He hit a towering shot to the LF power alley.  A spectator up by the gasoline bowser tried to catch the ball - it was clearly gone - but he defected it a little toward the Crawford Boxes, and as a result, it bounced off the yellow line where it drops from below the concourse to the lower setting near Tal's Hill.  The umps had a look and ruled that the spectator hadn't interfered because the ball was destined for home-run-ery anyhow (the correct call) and Reed managed the second home run of his young career.  This was by far the more impressive of the two home runs on the basis that it was a deep opposite field shot - something to dream on for Astros fans.

And that was it for Astros runs scoring.  Mike Montgomery relieved - he was unlucky to have been bumped from the rotation after a strong spring - and he ended up pitching four innings of two-hit ball (walking one).  He allowed a hit to the first of the Astros that he faced (a George Springer single), but aside from Valbuena reaching on an error in the sixth, and a Correa single and Rasmus walk in the eighth (followed by a well-turned 5-4-3 GIDP), the bases were free of traffic and the scoreboard operators weren't troubled.  Montgomery did well to hold the Astros down and preserve the bullpen.

Turning Point:
Perhaps Taijuan Walkers' foot discomfort was the reason, but the Astros got to him in the fourth frame with two two-run home runs.  After the game, he lamented the fact that he was leaving a lot of his pitches up in that frame, although the one Rasmus hit out was low in the zone.  Regardless, the Astros turned an infield single, a walk and two home runs into four runs in the decisive inning of the game.

Man of the Match:
Will Harris, All Star.  Harris' performance was no better than the rest of the bullpen's performance tonight, but he has been consistently excellent for all of his time in Houston.  He should be mentioned more in the MoTM dispatches.

Goat of the Game:
González, Gómez and Gattis all have surnames beginning with G.  G is also the first letter of the word Goat.  All three players carried 0-fers this evening.

Look for another righty-heavy lineup.  Plus, Sweeeeep.