*Sports on Earth's Will Leitch named Carlos Correa 2015's Top Newcomer:
Every once in a while, a player shows up and makes you thing: I'm watching a Hall of Famer.

*In order to stay on the team it's time that Jon Singleton performs, says Jeff Luhnow.

*The Astros were the 4th-most searched MLB team on Google.

*Now that I'm gone, there's a new contender for Biggest Astros Fan in Nashville. I talked to the guy that owns it when we lived there - real nice guy, gets his supplies shipped in from Texas. This would have been 2013, or so, you know - the tail end of the Crynasty. He wasn't as jazzed up about the Astros then, and who could blame him. Yeast Nashville's kolaches are excellent.

As an aside: there is a legendary donut place in the Green Hills neighborhood of Nashville called the Donut Den. They have kolaches and, up until Yeast Nashville opened, that was the only place I could find them. There was a Shipley a few miles away from our house, but they were hit or miss on whether they would have them. Anyway, the Donut Den is fantastic. And one time I asked them, "Do you have a jalapeño and cheese kolache?" And they all basically were like: 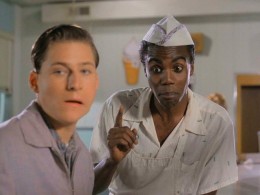 Like they had never even thought of such a thing as putting jalapeños in the kolache. Hopefully I changed history that day.

*The Rangers seemingly want Fort Worth to try to lure them to that side of the Metroplex.

*The jacknut that stopped traffic on I-45 to propose to his girlfriend will face a misdemeanor charge.
Posted by Astros County