From the Office of the County Clerk - G83: Astros in Boston

Crud.  It appears that Clay Buchholz is The Stopper after all.  He dominated the Astros tonight, coming one out short of recording a complete game shutout in a 6-1 loss.  He still managed a complete game.  The Astros bats weren't very impressive, but Buchholz dominated.  From what I saw of the game, he located most of his pitches very well.  When he missed his spots, he missed big, and it never came back to haunt him.  He certainly didn't miss over the plate much.

Anyhow, the Astros dropped Game 2 of the series to set up a day-game rubber match tomorrow.  Read on for a more complete description...

On the Mound:
Collin McHugh got the start, and he struggled from the get-go.  He lasted 5.1 innings, allowing 10 baserunners (10 hits, 3 walks, not including two errors which also allowed runners to reach) while striking out one.  The Boston offence has started to click recently, but McHugh was not sharp, again having trouble getting batters to bite on his curveball.  This is not a good sign, but perhaps this moves McHugh closer to solving the problem of why he isn't sharp sometimes, and what he needs to do to be sharp and effective.

In the first, McHugh did well to restrict the Red Sox to one run.  He walked Mookie Betts on five pitches, then Brock Holt! singled to right to put runners on the corners with no outs.  Xander Bogaerts followed with a single the other way - the pitch was an elevated breaking pitch off the plate away, and it kind of rolled up there with no sharp bite.  McHugh bounced back to get David Ortiz to pop out to right (and throw a tantrum in the process), Han-Ram to fly out to CF and Sandoval to go down swinging.

McHugh allowed another run in the second.  It started well, when Jon Singleton fell over while fielding Napoli's grounder, but flicked it to McHugh who was covering first in the process.  McHugh picked up the rebound and stepped on first base to record the out.  Shane Victorino singled on a seeing-eye grounder through the left side, then Sandy León - entering the game hitting .146 - singled to put runners on the corners.  A sac-fly followed, scoring Victorino.  McHugh bounced back to face one over the mimimum in the third and fourth, with the only baserunner having a reached on error when McHugh dropped the ball covering first.

An unearned run scored in the fifth.  Brock Holt! reached second after nubbing it just in front of the plate.  Conger threw it away, with the throw sailing on him - it may have been drizzling around that time,.  Bogaerts doubled to left field on another rolling breaking pitch low in the zone, scoring Holt.  David Ortiz then walked, but McHugh again retired the next three in order, not allowing either runner to advance.  The sixth was McHugh's final inning, and he allowed Sandy León to lace a single to right on a 2-2 count - the hit was off a rolling curveball that hung in the zone, and landed just out of the reach of a diving Presley.  Mookie Betts doubled down the LF line - the ball hugged the grandstand and rolled all the way to the corner, allowing the catcher León to score from first.

Hinch had seen enough, so he called on Roberto Hernández to mop up, down 4-0.  Hernández was effective retiring two of the next three to end the inning.  He came out for the seventh - retiring the side in order - and eighth.  In the eighth, he allowed two runs on a single, single (against the shift into short-left field), double to deep CF, grounder, grounder, walk, infield single (where Hernández failed to cover first) and pop out sequence.  The infield single was especially galling - Singleton made a solid play on a hard-hit grounder down the line around 10 yards behind the bag.  But he was left posted because Hernández didn't cover first - his only play was to get the force somewhere, but he instead tried to beat a diving De Aza to first, and failed by a hair.

At the Plate:
This won't take long.  Buchholz was very solid, which continued a good run of form for him.  He pitched 8 innings, allowing one run in his last start.  Prior to that, it was 7IP/1ER, 7IP/0ER, 6IP/4ER, 4.2IP/4ER and 8IP/0ER in reverse chronological order.  If I were a Red Sox fan, I would be maddened by his inconsistency.

Anyhow, the side went in order in the first.  Valbuena led off with a ground-rule double in the second - a pop up down the LF line that bounced into the stands.  He advanced to third with one out on a Gattis grounder, but Rasmus and Singleton struck out to end the frame.  The side went in order in the third, including another two strikeouts.  In the fourth and fifth, Buchholz set the side down in order on a total of 14 pitches - seven each inning.  Hank Conger reached leading off in the sixth - a line drive into RF, but he was retired on a fielder's choice, and his replacement was only able to advance one base on a wild pitch.  In the seventh, the Astros had singled sandwiching a double play.  The double play was pretty slick - Sandoval was standing where a shifted second baseman would be, and the ball was hit to his glove side.  He fielded it cleanly, turning his back to the infield and throwing to second in time.  His future is as a first baseman or DH - I wouldn't think he wasn't signed with the expectation that he would play third in the long term - so perhaps that piece of fielding plus his recent success abandoning switch-hitting may have Sox fans feeling a little better.

The Astros returned to normal function, going in order in ten pitches in the eighth.  In the ninth, Jose Altuve led off with a single, then went to second on a wild pitch and third on defensive indifference before Luis Valbuena singled to CF to score the lone run for the Astros.  Evan Gattis hit an 0-2 pitch onto the turnpike, but it was just foul, and he was the 27th out, flying out to RF on pretty much the same pitch about 45 seconds later.

The Astros had six hits, but four were leading off an inning.  They didn't walk, and struck out 8 times.    Luis Valbeuna went 2-4 with a double and drove in the only run of the game.  Altuve, Correa and Gattis all went 1-4, and Conger went 1-3.

The Astros weren't helped by the umps, but weren't really hindered either.  Buchholz got some calls away to lefties in a zone that the Astros struggled to hit, and down to righties.  One particularly flash call was up and away by about 6 inches in both dimensions.  No smoking gun here, but proof that Buchholz was able to hit his spots, and he got some calls that reflected that.  To wit: 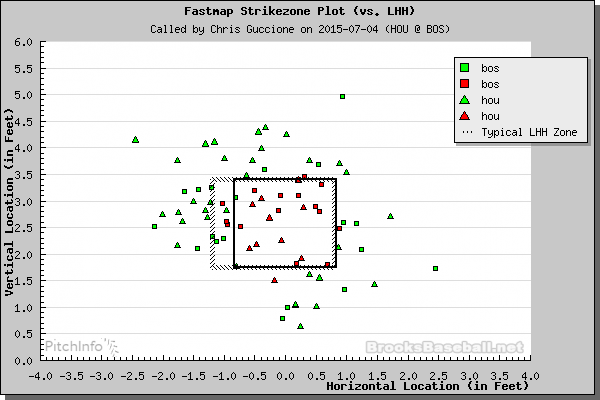 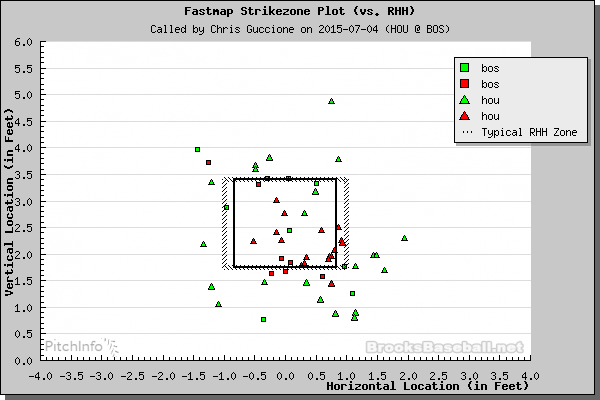 Turning Point:
Collin McHugh never had his best stuff tonight, so if Buchholz was strong, the Astros were in trouble.  Despite that, McHugh battled, twice recording three outs with runners in scoring position and runs having scored in the inning.  The Astros really needed to bounce back early, and when Luis Valbuena hit a ground-rule double to LF and went to third on a grounder, he really needed to be brought home.  Not to be, as Colby Rasmus and Jon Singleton with struck out to end the frame.

Man of the Match:
The various commentators (both radio and TV) have talked about Luis Valbuena a fair bit recently.  His all-or-nothing approach is well described by his .201/.281/.440 stat line.  He seems to be demonstrating more of a line-drive swing lately.  Tonight, he was good, going 2-4 and recording the only RBI and only extra-base hit for the Astros.  Combined with his solid defence, the Dexter Fowler swap has helped the Astros a lot (and also helped the Cubs).

Goat of the Game:
Toss up here between McHugh (5.1 IP, 4R, 3ER, 12 baserunners and only one strikeout) and Colby Rasmus (0-4, 3K).  Rasmus hasn't been well, but someone needs to stand up with Springer out, and Altuve getting hot leading off, and Marisnick, Rasmus and Tucker all working their OBP up a little would go a long way toward that happening.

On the Morrow:
Another day game, and another tough matchup for the Astros, who have struggled against Lefties all season.  Note is made that Domingo Santana was optioned for Handsome Jake Marisnick earlier today, so a righty corner outfielder with power has been replaced by a versatile righty outfielder with speed.  This will also be a big test for Lance McCullers, especially since the youthful top of the lineup is raking for Boston, and the veteran threats in the middle of the lineup are always umm... veteran threats.