From the Office of the County Clerk - G71: Astros in Seattle

The Astros lost the first two games of the series, so this game was only to salvage some pride and continue some recent solid form.  They are 2-2 on this road trip, and with an upcoming detour home via Anaheim, these intra-division games take on a little more importance.  And speaking of inside-the-division, the Rangers and Angels both lost today and yesterday, so the Astros had an opportunity to pad the lead a little - as well as keeping Seattle at arms-length.

This game was another tough-fought affair, with Velasquez struggling early, the Astros holding a narrow early lead, then pulling away late with a couple of insurance runs.  The end result was a 6-2 win, but Velasquez's lack of a put away pitch was exposed, and the 'pen had to clean up the last five-and-two-thirds of the game.

So the Astros' lead over the Rangers is 3.5 games, and they roll into Anaheim with a 5.5 game lead over the Angels.  Although the Mariners creep one game closer over the series, they fell to 8.5 games behind the Astros as a result of this loss.  The Athletics bring up the rear at 10.5 games behind the Astros.  The sometimes-used proprietary ".500 watch" has the Astros heading into the penultimate game of the season with an 86-75 record - possibly enough for a post-season berth.

On the Mound:
Velasquez's first inning took 43 pitches to complete which was a bit of a disaster - although he gave up only one run.  The Astros led entering the bottom of the first 1-0, thanks largely to some aggressive baserunning from George Springer in the top half of the frame.  Velasquez opened by walking lead-off hitter Logan Morrison on 11 pitches, before Mark Trumbo popped out to Marwin González on the eighth pitch of his at bat for the first out.  Robinson Canó walked on five pitches, then Nelson Cruz turned on a low breaking ball, and he lined it to shallow LF to score Morrison from second.  Kyle Seager flew out, then Seth Smith walked on a full count before Brad Miller struck out swinging.  In all, thirteen pitches in that frame were fouled off, nine by the first two batters.  The last pitch which struck out Brad Miller hit 97 on the gun (fastest of the day for Velasquez at the time), and seemed to have more explosive movement.  I think that Velasquez felt he had found his fastball during that at-bat.

The results seem to bear that out, because the next three batters went down on strikeouts.  The second inning still took 16 pitches, however.  Velasquez also retired the side in order in the third.  He retired the first batter of the fourth before allowing a line-drive double on a full count to Seth Smith, and then walking Brad Miller, who fouled off four pitches of his at-bat before getting his free pass.  Brian Gorman missed a strike call on one of the 2-2 pitches.

Hinch had seen enough, and he turned to Tony Sipp for relief.  Sipp retired the next two batters on a fielder's choice and a fly out, which closed the book on Velasquez's night.  He allowed two hits and four walks in three-and-one-thirds, throwing 93 pitches (including 31 foul balls) while striking out five.  He allowed only one earned run.

Sipp started the next inning (the fifth) and he was immediately in trouble.  Logan Morrison - no one's idea of a lead off hitter, but he was leading off tonight - led off with a double into the RF corner.  Mark Trumbo grounded him to third, and Robinson Canó drive him in with a sac-fly to left field.  Hinch called on Will Harris, who walked Nelson Cruz on four pitches and Kyle Seager on six pitches before enticing Seth Smith into an inning-ending ground out.

At that point, the score was 3-2 Astros.  The Mariners were to have only one more baserunner in the game, however.  Will Harris set the side down in order in the sixth, Joe Thatcher continued his solid pitching of late by setting the side down in order in the seventh.  Pat Neshek retired the side on seven pitches in the eighth.  Luke Gregerson allowed only a two-out single to pinch-hitter Dustin Ackley in an otherwise perfect ninth.

At the Plate:
The Astros offence continued to produce runs in the first inning - by my count, 8 of the last 10 have involved runs scored in the first inning for the Astros.  Much of that is due to George Springer's recent hot streak.  Entering this game, he has batted .370/.427/.570 over the last four weeks, hitting five home runs and five doubles in the process.  That streak continued tonight - Springer singled to CF, went to second on a wild pitch (a decent throw would have had him dead-to-rights), advanced to third on Carlos Correa's grounder to short, and scored on Evan Gattis' single past the drawn-in infield.  Had Springer still been on second, the infield likely would had the luxury of playing back, and perhaps that run would not have scored.

In the second, Colby Rasmus doubled down the RF line - the ball landed on the warning track and bounced out of play.  Domingo Santana struck out - he was down 0-2 early, but he fought back to even the count, and was called out on a dubious called strike by the home plate ump - one of many dubious called pitches recorded on the night.  Luis Valbuena hit a first pitch line-drive to CF, and Rasmus scored.

A Correa two-out single was the only baserunner in the third, and a Santana walk was the only action in the fourth.  In the fifth, the Astros extended their 2-1 lead by one - Jason Castro hit a clean single to CF with one out, George Springer singled to CF as the next batter, then with two outs, Evan Gattis hit a hard grounder to short that Brad Miller mis-played, allowing it to bounce right through his legs.  That scored Jason Castro, and Springer again ran the bases aggressively, heading to third on the play. Chris Carter walked to load the bases, but Colby Rasmus struck out looking to end the threat.

A Valbuena walk and González single with one out created some opportunities in the sixth.  But Jason Castro struck out looking on a dubious low strike on a breaking ball - the inconsistent strike zone calls were coming thick and fast at this point - then George Springer went down swinging.  In the seventh, the Astros plated two when Chris Carter worked a walk off Tom Wilhelmsen, then Colby Rasmus took a 1-0 fastball down the pipe, and he deposited it deep into the RF stands.  George Springer homered in the next frame, hammering an elevated off-speed pitch into the LF power alley for the sixth run of the game.

Offensively, George Springer was the standout of the night.  He went 3-5 with a home run.  Colby Rasmus was nearly as good, going 2-2 with a home run.  Luis Valbuena went 1-3 with a walk (against a lefty, too).  Jason Castro and Marwin González both went 1-4, and Carlos Correa and Evan Gattis went 1-5.

Turning Point:
Evan Gattis threaded one through the wickets of Brad Miller with two outs in the fifth.  That scored Jason Castro from second, and gave the Astros a third run.  They would not relinquish the lead from that point.

Man of the Match:
George Springer is now hitting .284/.378/.490 and carrying the offence for the last month for so.  He is an unconventional lead-off guy, and I think Hinch sticking with him in that slot is a very good use of resources.

Goat of the Game:
The home-plate umpire was the crew chief, Brian Gorman, and he was... ummm... not good.  How not good??  Behold: 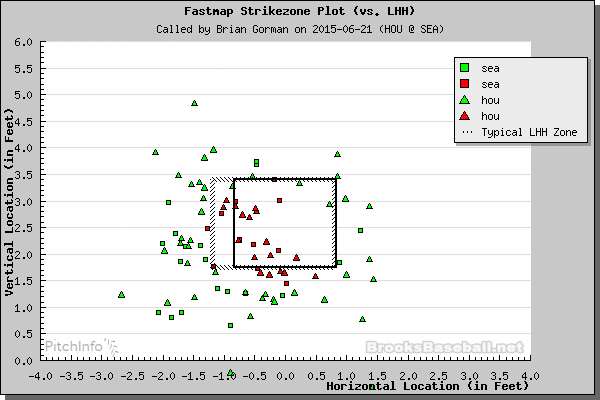 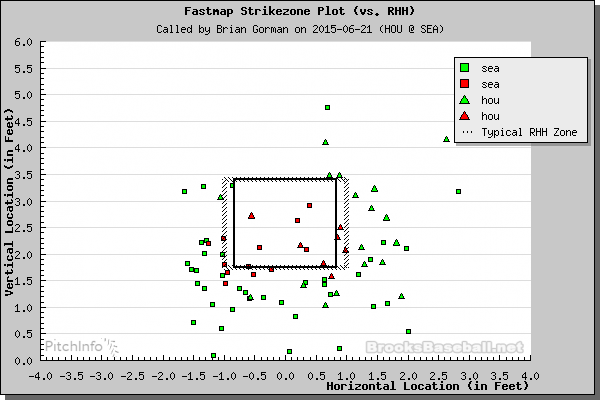 The Astros got squeezed.  Thanks, Brian Gorman.  You are the Goat.

Up Next:
The Astros are in Anaheim.

He is opposed by fellow lefty, Hector Santiago (4-4, 2.77).  Expect to see Marisnick and Altuve in the lineup if they are he is ready to go.