UPDATE 7:33pm: NEVER MIND. Correa is now in the game for Corpus at Midland. Colin Moran has an injured shoulder. So now it's "Correa still in Corpus and Colin Moran is hurt." Something *is* happening, it's just not good. 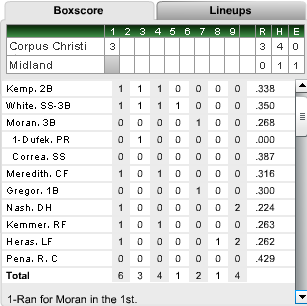 So about 6:15pm Central time Jeff Luhnow tweeted this...


What do y'all think? Houston’s Supervillain: Should the Astros Activate the Death Star Ahead of Schedule? http://t.co/IVnHrA6Yxg
— Jeff Luhnow (@jluhnow) April 30, 2015

WELL. Fast forward to this:

Who isn't on that list? Shortstop Carlos Correa. Weird, huh? Now, it could just be a scheduled day off - Correa got the last game of the Tulsa series off on April 21 and then there was a travel day on April 22. So if the Astros are working to give Correa a day off every week or so, then this might be it.

That said, MLB.com's Jim Callis said he wouldn't be surprised to see Correa in Houston:
Correa hasn't played above Class A before this season and the Astros don't want to rush him, but they're also hoping to contend and his immense talent can't be denied. He'd help Houston win more games than Marwin Gonzalez or Jonathan Villar will.

And THAT said, the New York Post's Joel Sherman wrote this morning that Lowrie's injury won't play a factor in calling Correa up. Luhnow told him:
Carlos is getting close, but he's had 70 at-bats above A-ball so we'd like to see more. We are going to go with Gonzo/Villar for now, but we will be monitoring the situation closely.

Then the suddenly-chatty Luhnow told MLB.com:
It's different for every player. Carlos is a unique player, so the typical time for each level may not apply to him...Altuve was able to skip Triple-A completely, and I think Carlos may be able to, but right now it's something that we're discussing internally.

But Tuesday Luhnow told the Chronicle:
There's some value to him staying longer in the Texas League. There's also value in him going up to the next level and seeing better pitching. So we're going to weigh those options as we go forward and continue to evaluate what's happening in Houston. But he's certainly coming into the discussion as he should be. He's a potentially franchise type player.

It could be that the Astros don't like what they're seeing in Marwin and/or Villar. But Correa isn't going to skip Triple-A and ride the bench, he's going to start. So it would have to be a big knock on Marwin/Villar in order for them to promote Correa. That said, the Astros are weird and who knows what they think?