So...something just happened. Brad Peacock was scheduled to make the start against Felix Hernandez and the Mariners tonight, but that's not going to happen now:

#Astros officially recall LHP @Rudy_Owens from Triple A OKC to make tonight's start at Seattle. RHP Josh Zeid has been optioned to Triple A.
— Houston Astros (@astros) May 23, 2014

Via Evan Drellich, we find that Brad Peacock has some forearm soreness, which basically means that he'll have Tommy John surgery before needing full amputation.

This will be Zeid's 3rd stint in OKC this season. He last threw on May 19, giving up the hit that broke up Keuchel's 2nd straight CGSHO.

Meanwhile, we have exclusive video of Mike Foltynewicz's (who is not on the 40-Man roster, remember) reaction:

Update: Now this is getting weird. According to McTaggart, the Astros will call up Brett Oberholtzer later, indicating that Peacock is headed to the DL and, probably, organ harvesting. But now Evan Drellich is reporting that Peacock may not be a DL-case, and there aren't any more moves planned of which Luhnow is aware. And check out this screencap of Astros.com under Latest News (H/T @BBfanlady): 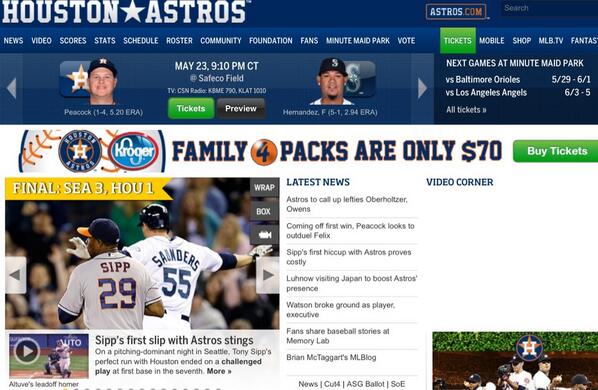