The last time I tried this was before the 2012 season, and that didn't go so well. That year, I said the Astros would finish 74-88. Hahahahahahaha. So, before I put these together I went back to see what had gone so wrong, according to my projections.

Now, anytime you put together projections the goal isn't necessarily to be perfect. You're looking for a likely outcome for each player, yes, but my goal isn't so much each player but the team as a whole. Some guys are going to have unexpected breakouts and some are going to deposit feces on their mattress, but the idea is that you can project a reasonable baseline of expectations for the team as a whole. What I found from my last crack at this is that I did a pretty good job with the pitchers. I said they would allow 770 runs and they gave up 794. I'll take that.

The offense, however, missed horribly. I had projected 706 runs scored. They only scored 583. That's a big miss. So what caused such a big difference? Well, first I hadn't factored in that pitchers would hit. I guess I was still consumed with the impending move to the AL. But I had missed by 17% and pitchers didn't have 17% of the teams plate appearances. What happened was we had significantly poor seasons from six players who had a decent amount of playing time. JD Martinez, Jordan Schafer, Chris Snyder, Brian Bogusevic, Marwin Gonzalez, and Matt Downs, I'm looking at you. They had all seen various levels of success in the past, but colluded to make me look bad. It's the only explanation. Altuve and Castro tried to pick up the slack that year, but it's hard to counteract almost 2000 REALLY bad plate appearances.

Thankfully, I don't have to worry about pitchers hitting anymore, but with a young club there's still a good chance of significant variability in their performance versus projection. Basically, I'm saying if I'm right I'm a genius, but if I'm wrong it's not my fault.

Ok, enough words, here are the numbers for 2014. I debated redacting Cosart's name for fear of being called an idiotic, mentally disabled bundle of sticks who sub-blogs players, but decided to live dangerously. 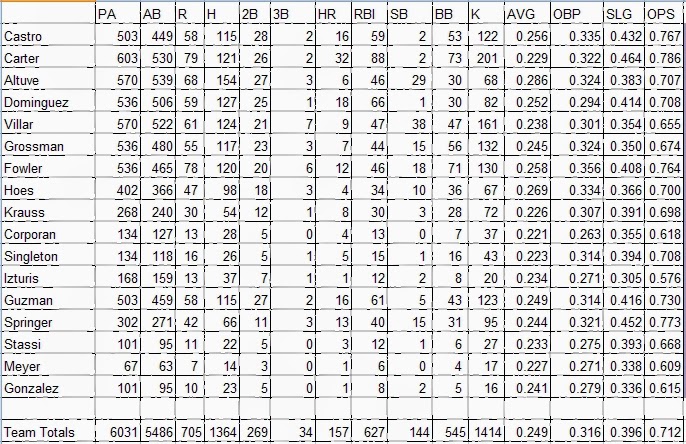 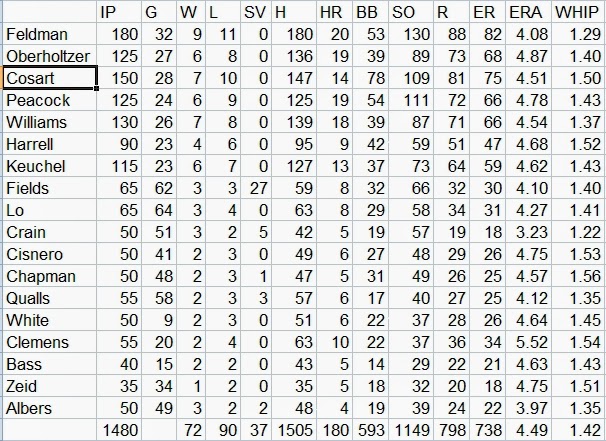 Like I did in 2012, I used the projected run totals to come up with the clubs pythagorean win rate. If these projections are accurate in total, the Astros will go 72-90 this season, good for a 21 win improvement over last season.