What did the A's and Rangers just do?

There's been a lot of hand-wringing about the relative lack of Astros moves, even news, lately. Brian McCann, Ricky Nolasco, Phil Hughes, and A.J. Pierzynski have already signed with new teams, and some trades are going down as well. The Mariners are getting linked to every single free agent you can think of (including, apparently, Robinson Cano). At least the Angels are just crying into a bucket and making their fans drink their bucket of tears. The trade today between the A's and Rangers was an intra-division trade, one of those that actually makes both teams better. So what happened?

A's receive:
30-year old fast outfielder who is good at defense named Craig Gentry. He hit .280/.392/.409 against lefties in 2013, and also hit .338/.428/.454 in the second half of the season. This season he also hit .421/.450/.474 at Whatever Oakland's Official Baseball Playing Sewer is called. Dave Cameron said that Gentry's baserunning valuations make him virtually equal to Jacoby Ellsbury. As mentioned, Gentry is a good defender, posting a 13.8 rating by FanGraphs, and his UZR rating was 14.2 and 14.3 in 2012 and 2013, respectively. Linking back to the Cameron article, Gentry has the best UZR/150 rating among centerfielders with at least 1,000 innings in the last three years.

26-year old pitcher named Josh Lindblom. He's alright. In 132IP for the Dodgers, Phillies, and Rangers over the last three years, he has a 3.82 ERA (helped by solid stints with the Dodgers), who walks about 10% of the batters he has faced at the ML level. Going back to a bigger stadium ought to help him.

20-year old 2011 4th Round draft pick Chris Bostick. Hit .282/.354/.452 for Low-A Beloit in 2013. My immediate thought of Bostick is that he has the exact same name as a (formerly) prominent car dealer in Nashville who would ride around in a news station's trafficopter, and make terribly annoying commercials like this one:

I also have a very funny, but untellable, story about seeing him leave a bar with a woman who was not Dessie. Spoiler: Chris would later be accused of physically abusing Dessie, whom you see at the end.

Point is, things are happening for a lot of teams. And things are not happening for the Astros, or so it seems. And that's a very important clause there at the end. The Astros, under Luhnow, have run a pretty tight ship in the Leaks department. We don't get to hear much about what the Astros are doing because either (1) they're not saying or (2) no one cares. As much crap as we like to give Gammons and Olney about not talking about the Astros, it's possible that the media has nothing to talk about, because the Astros aren't going to let their offseason play out through them - like they did with Pettitte, Clemens, Beltran, etc.It should be pointed out that, when the Astros seemed hard in on Jose Dariel Abreu, that got plenty of mention. 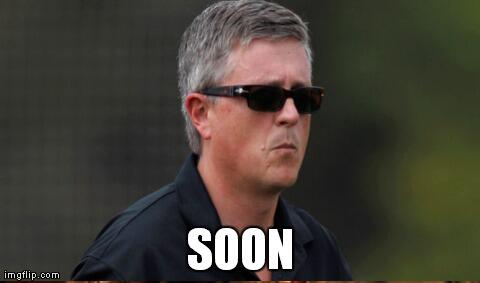