Oh Travis Blackley so funny! He had a whole host of things to say in a cute Australian accent. Let's see if what he had to say is accurate! (Everything in italics are quotes from Blackley in the linked article) 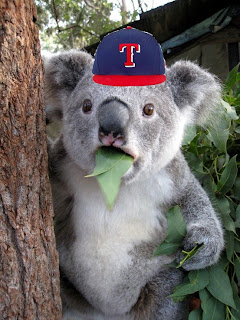 It went from couldn’t wait for the season to be over to don’t want it to end.

Now this is highly likely. Because the Astros were in last place, he wanted the season to be over. Now that he's in first place, he doesn't want it to end.

It was good when you were pitching well.

And then you have a couple bad ones in a row, try to pull yourself out of that hole...

Like the aforementioned first two games of the season? 3IP, 4H/4ER, 1K:2BB, 2HR? Or the three straight outings between June 25-29 (2.1IP) where he allowed 5H/5ER, 2HR? Or the July 22/24 back-to-backs where he allowed two homers in five total batters? Or his last game with the Astros, when he faced two batters - both of whom reached?

This never happened. Twice he pitched on six days of rest, and one of those stints was because of the All-Star Break. He pitched once between July 6 and 20. There were nine games in that span (again, the All-Star Break and two off-days in a calendar week). Blackley made 42 appearances for the Astros. 31 of those appearances were on two or fewer days of rest. Five times he pitched on three days rest, three times on four days rest.

That was my first experience doing that, sort of relieving.

I felt like I ended OK, and most of the time I got it done when it counted, especially the one-run games...

Blackley came into one-run games 12 times for the Astros in 2013, and while he gave up earned runs in only three of them, he allowed baserunners in eight of them.

...or coming in with the lead or tied.

25 of his appearances came with the Astros ahead, or tied. They were in a worse position when he left in 12 of them.

Most of the ERA came from the blowout games...

Blackley never faced a team down ten runs. He did face the Indians at home in his Astros debut on April 20 down nine runs, and gave up 3H/3ER, 0K:2BB, and the Tigers on May 5 down nine runs at home, and gave up 1H/0ER in 0.2IP. Against Oakland on May 25 at home, down six, he struck out two in a scoreless inning. Yes, all three of those appearances were down 6+ runs (but not ten) and at home. 117 of the 152 batters he faced came with a margin of three runs or fewer.

I gave up one run on the road; all the other runs came at Minute Maid. I’m not a big fan of pitching there.

It just felt like the mound was 75 feet from home, and it was just a weird feeling for me.

I don't even know what this means.

Travis Blackley has pitched at Fenway twice in his career.

But I’ve thrown here before, and I’m pretty comfortable here.

In his career, Blackley has pitched in Rangers Ballpark four times. In 42 plate appearances he has allowed a .317/.333/.537 line. So, good for him for being comfortable.
Posted by Astros County