Qs, As with Mark Appel 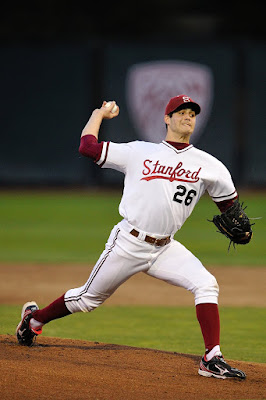 
This afternoon Astros County had the opportunity to talk to Houston native and Stanford ace Mark Appel - who just happens to be a prospective #1 overall pick in the 2012 June Draft. By virtue of Houston's 106 losses in 2011, there's a chance Appel could be returning to Houston. Here's the transcription:

AC: First off, I appreciate you taking the time to do this.

MA: Absolutely, not a problem.

AC: With the arrival of pitchers and catchers and the start of the baseball season, it's officially Spring. Over the past weekend, in the season opener, you held Vanderbilt to one run on two hits over seven innings - which, I'll just tell you right now, I live in Nashville; opening weekend against Stanford caused Vanderbilt and Nashville sports radio great weeping and gnashing of teeth. How does it feel to be playing baseball again?

AC: (awkward, hesitating pause) What are your expectations, both for yourself and for Stanford in 2012?

MA: Personally, I don't really have any expectations for myself, and that's just more of a mental thing. If I play good or if I play bad, I want to have a steady mindset and prepare for the next time out, no matter what the results are. I just want to focus on each and every pitch, the best one I can, and the results will take care of themselves. For the team, I wouldn't put it past us to, hopefully, win the Pac-12, and potentially a National Championship. I think we have the guys to do it. Our hitters have proven that they can put up some runs and now it's time for our pitching staff to prove that we can limit some offenses to one or two runs per game.

AC: You spent the first 12 years of your life in Houston, your uncle is the Dean of the Architecture school at Rice, and then moved with your family to the Bay Area. Do you go back to Houston often, and what does Houston mean to you?

MA: Oh, it means a lot. I still tell all my friends that I'm from Houston, even though I've lived in California for eight years now. But I just really enjoyed living in Houston when I did, and that's not to say I haven't enjoyed California - but it has a special place in my heart, with a lot of family and a lot of childhood memories, just so many great things that I remember about Houston. Like you said, my uncle is the Dean at the Architecture school at Rice, and my family has been a Houston family for as long as I can remember - both my parents are from the Houston area, as well as my grandparents. As long as I can remember it's been Houston, and moving to California was kind of a big change for us. But it definitely holds a special place in my heart.

AC: It was in doing some reading and preparing for this interview that it was in high school there in California where you found God. Some people might find that strange, because if there’s one thing you can get a lot of in the South (and in Houston, specifically), it’s religion. What changed?

MA: I wouldn't say that I "found God" in California -

MA: - I became a believer at a young age when I was 10 years old back in Houston. I was getting baptized and my pastor at my church - I went to Bethel Presbyterian over by Chimney Rock - asked if I knew what it meant to be a Christian, and I kind of knew all the little things. I knew who Jesus was, and all this stuff, but I never really understood what it meant to be a Christian and actually live that lifestyle. I guess God became real to me when I moved to California because that was when I first experienced adversity and different tests and temptations in my faith. I went to Second Baptist in Houston, this small, private, Christian school - I never really heard anything other than, "what it meant to be a Christian, and what the Bible said." But once I moved to California and went to public school, I started hearing how guys would talk about girls, a lot of different things that I never really understood. Going through those doubts and really tough questions about my faith was what really made my relationship with Christ real to me.

AC: Stanford has had quite a bit of success in the draft, for a long time, but most recently, as well. The Astros have been comfortable drafting Stanford guys - from Jason Castro in 2008, Brandt Walker in 2009, Kellen Kiilsgaard in 2010, etc. How do your coaches prepare you for the draft?

MA: They don't really prepare me any differently from the way they prepare anybody else. Their focus is on the season, and on winning games, and it's also on trying to maximize the talents of all our players because by maximizing our talents, we're going to have better chances of winning some games, and then the draft will come when it comes. Coach (Mark) Marquess does a really good job of keeping all the players focused on the season. He is kind of a buffer for scouts - obviously scouts will want to talk to some of the players on the team this year. Coach Marquess does a great job at really making sure that the scouts are still satisfied by allowing meetings to happen, but also that the players will still be focused on the season, because that's the most important thing right now. And when the draft comes, we can start worrying about that a little bit later.

AC: You've sort of alluded to my next question - there's a lot about the draft you can't control. At what point did the possibility of being the #1 pick, and the number one pick being Houston's, when did that sink in, and how do you feel about it?

MA: Ever since people started putting out mock drafts or projections, and I saw my name next to Houston, it was pretty cool. Maybe even having the opportunity of going back home and play for the team that I grew up watching play, it's just cool to think about. God is just too good for something like that to happen. It's a really cool opportunity and obviously I can't control whether the Astros take me, all I can control is how I play on the field. If the Astros decide to pick somebody else, that would be fine with me, I understand it's a business, but it's also a dream of mine to be able to play baseball in the Major Leagues at some point.

MA: I guess that is a fairly common question. Andrew is a great guy - also from Houston - so I guess we have that in common. Our families have some mutual friends, and I've met the Lucks once or twice because of that. So it's a cool thing to think about, but it's not really high on my priority list right now. I'm focusing on the season, preparing for Friday night against Texas, and try to go out there and take it one pitch at a time.

AC: That sounds great. Good luck this season, and hopefully we'll see you in Houston after the draft. Thanks a lot. Have a good one.

MA: Thank you. God bless.
-
Big thanks to Mark Appel for taking time out of his day to answer these questions, and thanks to Stanford's Media Relations department for helping to make it happen. And follow Mark on Twitter.
Posted by Astros County